Late singer-songwriter and composer Ronnie James Dio who has worked with a number of legendary bands from Rainbow to Black Sabbath had an admirable career that spans over 50 years, influencing countless other artists both in his lifetime and after his passing, left a legacy to be coveted. But what exactly makes the iconic Ronnie James Dio so extraordinary that every other musician revealed their admiration to the singer during multiple even to this day, let’s find out.

Ronnie James Dio had a career filled with triumph moments that resulted in him being regarded as one of the greatest and most influential heavy metal artists of all time, mostly thanks to his tenure with iconic bands such as Elf, Rainbow, Black Sabbath, Dio, and Heaven & Hell with whom Dio managed to create a splendid image of himself.

There’s no doubt that late Black Sabbath singer is often referred to as a special vocalist not only by a number of reputable magazines including Classic Rock Magazine when Ronnie James Dio was awarded the ‘Metal Guru Award,’ and named ‘Best Metal Singer’ at the Revolver Golden Gods Awards, but also other musicians still continue to mention his name as one of the most influential and greatest musicians in the music industry. Now, let’s take a look at those artists on the 21st death anniversary of the legendary Dio in order to remember how and why he was considered a special human being along with a great artist. 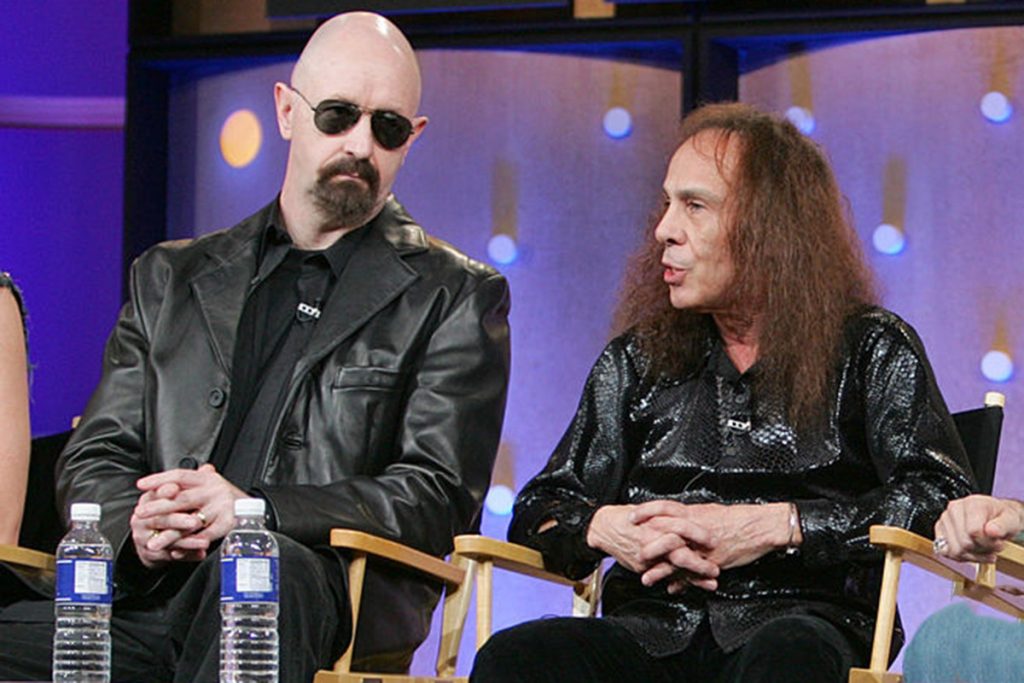 While the fans love comparing these tho iconic lead vocalists, deciding which one is the greatest metal frontman ever, Judas Priest lead singer Rob Halford seemed to made his mind as he revealed during a podcast interview last year since he referred to Ronnie James Dio as his ‘rock god.’

Rob Halford expressed his admiration to the late musician during an interview and he had nothing but kind words about Dio, stating that the first time he heard him singing was just like ‘a bolt of lightning’ due to the power, character, and energy he had in his amazing vocals which is agreeable according to many fans.

In addition to mentioning the power Ronnie James Dio has in his musical career, Judas Priest’s frontman didn’t forget to mention the humanity Dio had with the charity work he was so passionate about which is another aspect of the elements that make the late singer stand out.

Here is what Halford said about Dio:

I can’t remember exactly when I heard Ronnie’s voice but – I do know that the first time I did hear it, it was just like an electric shock, a bolt of lightning. Because this voice had so much power and so much character and so much energy and so much of everything that makes a great singer.

So, from that moment on, I was a huge Ronnie James Dio fan, and I followed his career from pretty much when he first came to be known throughout the world of rock ‘n’ roll – the great things that he did with Elf, and then of course with Rainbow and Black Sabbath – Heaven & Hell.

What a great legacy Ronnie’s left – it’s all about the voice. Even now, I always blast some Ronnie before I go out on the stage because he psyches me up, you know, he gives me the essence of what a great singing performance should do. I just love listening to the man. Not only his voice, of course, but also his great work in helping other people. If ever a man was a rock god, for me, it will always be Ronnie James Dio.”

You can see the source right here.

One of the most memorable incidents during Ronnie James Dio’s career must be the time when he joined Black Sabbath as the band’s lead vocalist, replacing the iconic frontman Ozzy Osbourne in 1979. There’s no fan that questions how iconic the band was with Osbourne, however, Dio made an excellent job while he had the biggest shoes to fill in and every musician that worked with him during his time with Black Sabbath seems to have fondest memories with Ronnie James Dio.

During an appearance on That Jamieson Show towards the ending of last year, Blue Oyster Cult lead singer Eric Bloom opened up about the band’s 1980 co-headlining tour with Black Sabbath, while doing so, Bloom referred to the band as ‘Dio Sabbath’ in order to separate the two iconic eras of the band which sounded pretty accurate to most fans considering that Dio was just as legendary as Osbourne himself.

While stressing the fact that Ronnie James Dio was a good friend of theirs, Blue Oyster Cult lead singer compared Black Sabbath lead singer to the other members of the band, unintentionally, and revealed that he was a great person while others were a little distant during the tour which indicates how Dio was also a sincere person as well as being an incredible musician.

Here is what Eric Bloom said:

“It was great. It was the Dio Sabbath, not the Ozzy Sabbath. So it was the ‘Heaven and Hell’ era and it was great because Ronnie was a good buddy of ours.

And the British guys – I’ll tell the truth, we’re a little standoffish, but Ronnie was a great guy.“

You can click here to see the source of the interview.