Many fans dream about seeing their favorite artists performing together or collaborating on a project. Supergroups help these dreams come true. After some time working together and founding out they have chemistry, or out of their admiration for each other’s work, musicians come together to form supergroups. For instance, John Lennon, Keith Richards, Eric Clapton, and Mitch Mitchell came together to form The Dirty Mac but sadly gave only one performance.

Another supergroup was WhoCares, which Ian Gillan and Tony Iommi formed to serve a good cause: raising money to help Armenia after the 1988 Spitak earthquake. Eagles’ Joe Walsh and The Who’s John Entwistle also attempted to form a supergroup named The Best, but it ended up being a temporary effort. As it appears, John Entwistle’s bandmate Pete Townshend also founded a supergroup with Pink Floyd icon David Gilmour called Deep End. 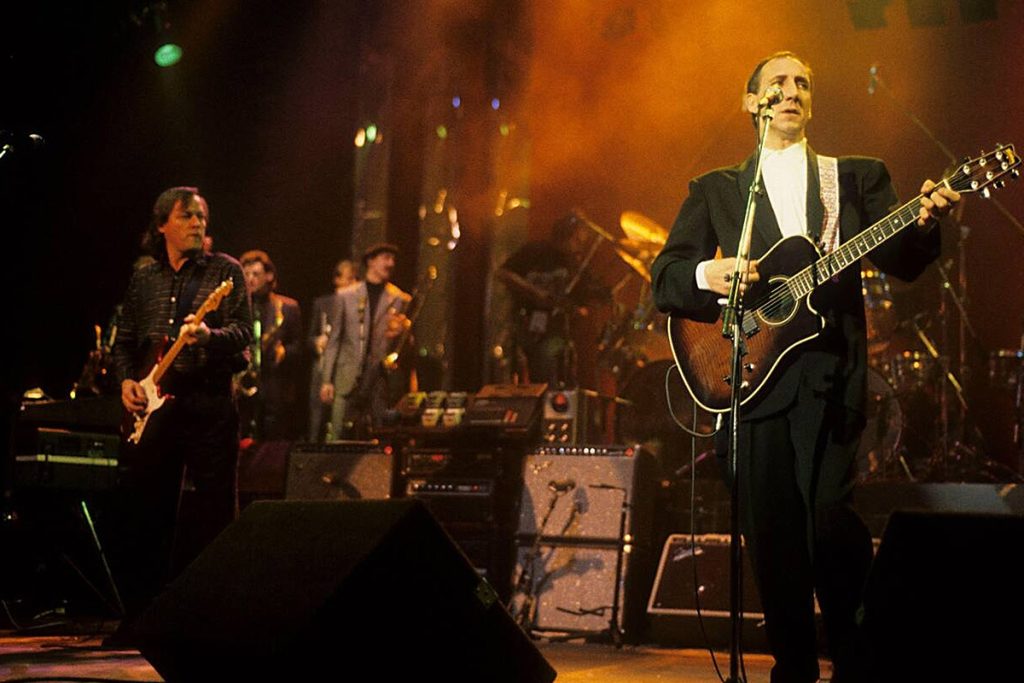 Following the Who’s farewell tour in 1982, Pete Townshend decided to work as a book editor to make a living. However, he couldn’t stay too far away from music — three years later, Townshend started working on a concept album along with John ‘Rabbit’ Bundrick, Steve Barnacle, Mark Brzezicki, and several guest artists such as Pink Floyd’s David Gilmour and Pino Palladino.

Deep End was to perform songs from ‘White City: A Novel,’ but they ended up focusing on the Who hits and Townshend’s solo efforts. Although it would be a delight to see Gilmour and Townshend on stage for numerous dates, they didn’t embark on a tour together after these shows. According to the Who icon, it was because his daughter fell ill, and he decided to focus on his family.

“I remember listening to those tapes and thinking, ‘F*ck!’” Townshend told Rolling Stone in 2015, implying he was pleased with what they had done together as Deep End. “It was such a great band! I’m singing so well, and it sounds so good. I’m obviously enjoying it. Why didn’t I tour it?’ And the answer is very simple. On the second night at Brixton, my daughter was taken to the hospital.”

Later on, the unforgettable concerts were released in two live albums titled ‘Deep End Live!’ and Live: ‘Brixton Academy’ 85.’ Although Deep End didn’t reunite again, many of the band members hopped on the same stage with the Who and Pete Townshend in later years. However, David Gilmour was focusing on Pink Floyd after Roger Water’s departure, so he wasn’t a part of these reunion shows.