Rock music is filled with musicians who were close friends before their music career turned them into enemies. This is so common among artists that a case where two rock stars whose friendship survived all those years regardless of the possible endings due to musical obstacles is relatively rare.

With that being said, there are also celebrated friendships that rock fans always admire, such as R.E.M.’s Michael Stipe and Radiohead’s Thom Yorke have. The duo has been friends for decades, and they had one experience that could’ve ended their relationship since Stipe directly admitted Yorke stealing one of their songs. 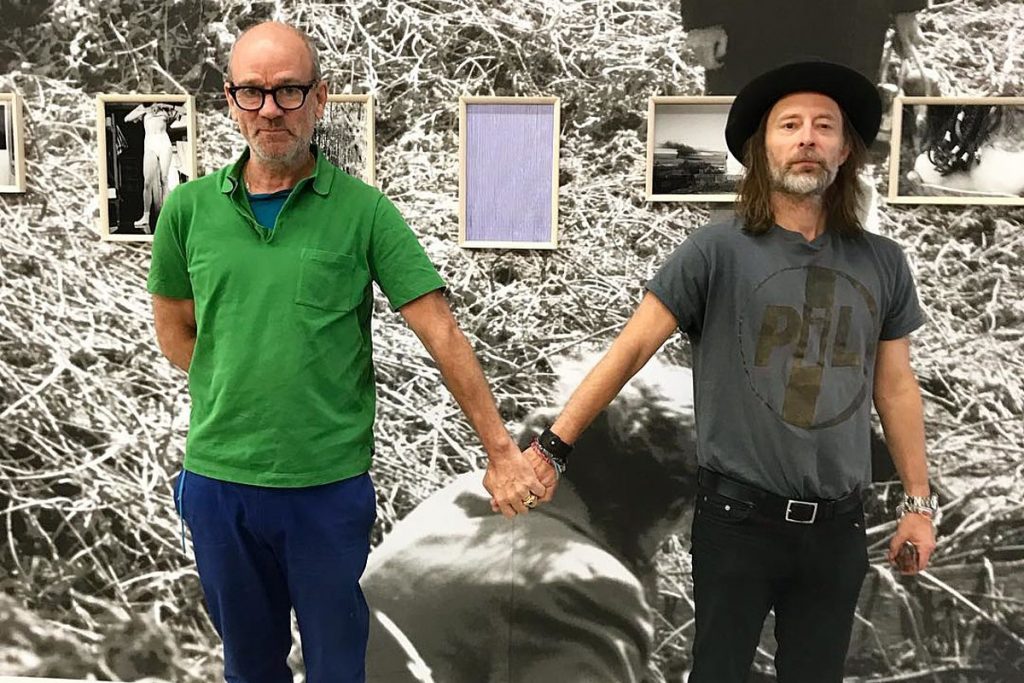 Growing up, Thom Yorke considered Michael Stipe one of his heroes and early influences as a musician. Fortunately for him, he became close friends with the R.E.M. singer as an adult. In fact, they have a friendship many other musicians admire since they have managed to remain close after all these years. Their friendship gave both Yorke and Stipe someone to turn to in times of need, especially when Radiohead’s rapidly expanding fanbase grew bigger and became overwhelming for Yorke.

Stipe helped him during that period, reflecting their supportive relationship. Since then, the duo has always been spotted spending time together, such as visiting museums and having dinner, all of which resulted in numerous photos together, like the one above. True friendships in the music industry are often tested when two musicians’ careers cross paths, and it’s fair to say that these two passed the test.

‘Reveal’ is the 12th studio album by R.E.M., released on May 14, 2001. The album generally received positive reviews from music critics, and there’s one song in it that has an extraordinary story behind it. The track named ‘Disappear’ was written by Michael Stipe, and he thought he stole it from Radiohead.

During an interview with NME back in 2019, Stipe opened up about this issue and recalled the time he realized the song was incredibly similar to Radiohead’s ‘How to Disappear Completely,‘ released on the band’s fourth studio album, ‘Kid A’ on October 2, 2000.

After realizing that the finished version of ‘Disappear’ had an uncanny similarity to the Radiohead song, Michael Stipe couldn’t let himself get away with it, mainly because they were close friends with Yorke. Apparently, Stipe called his close friend Thom Yorke to apologize for supposedly stealing the concept behind their song, only to receive an unexpected reaction.

Thom Yorke revealed that the song was inspired from the time he was going through a period of extreme depression during the late 1990s, during which Stipe advised him to think this motto, ‘I’m not here, this isn’t happening.‘ Thus, the Radiohead frontman actually felt like his song was inspired by Stipe in the first place. Their song was indeed based on Stipe’s words as the chorus of ‘How to Disappear Completely’ is directly his words.

“There’s a song called ‘Disappear’ that I wrote and loved. We recorded it, we mixed it, and then I listened to it back and thought, ‘Holy fuck! I stole this from Radiohead. What do I do?’ Their song was ‘How to Disappear Completely,’ but I had written this thing. I called up Thom, really afraid, and said, ‘I don’t know what to do. I think I’ve stolen the song of yours.’ I read the lyrics to him over the phone, and he’s like, ‘It’s yours, it’s not mine. There’s no correlation.'”

You can watch the interview and listen to the songs below.