When Metallica Stole A Riff From Lynyrd Skynyrd

Rock music history is full of rip-off accusations, and in some cases, they turn into years-long feuds or legal battles. The devoted fans of the genre are also aware that some artists rip off each other, even the most famous ones. In some cases, these rip-off allegations lead to serious lawsuits that financially harm the bands or the musicians.

Sometimes, musicians are aware of being ripped off but don’t sue the other artists because they love them, just like KISS did with Bruce Springsteen. Moreover, in Metallica’s case, they ripped off a riff from one of Lynyrd Skynyrd’s songs, and this was intended as a joke in the beginning.

How Did Metallica End Up Ripping Off Lynyrd Skynyrd? 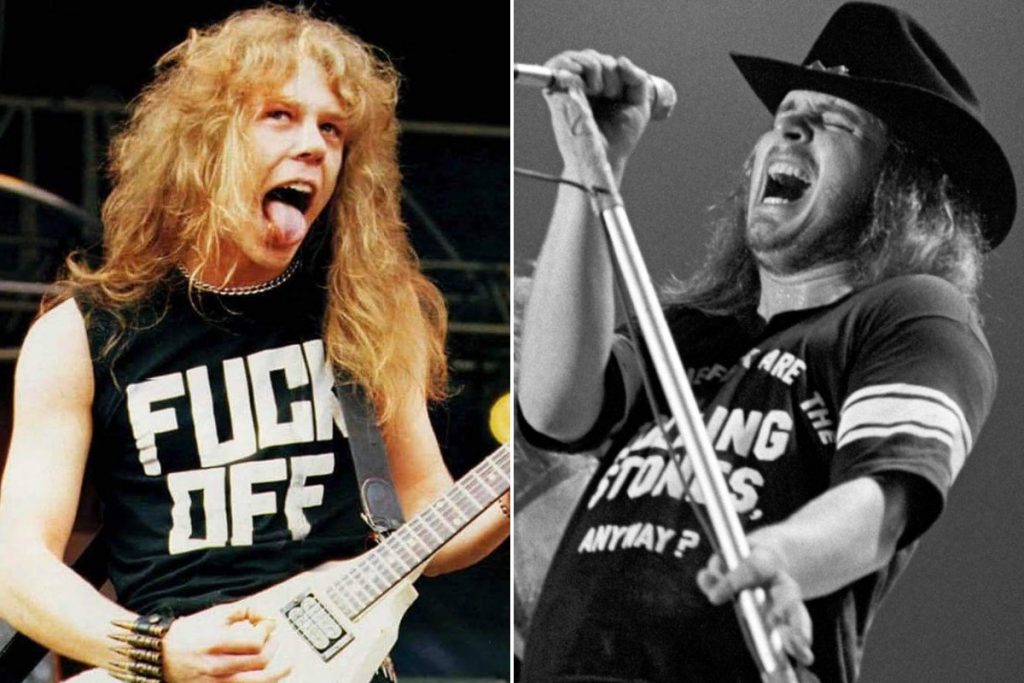 Metallica released their debut album ‘Kill ‘Em All’ on July 25, 1983. This album featured four songs made with Dave Mustaine’s contributions, released after he was fired from the band on April 11, 1983. Although Mustaine told them not to use any of his music, the band used his ‘The Mechanic’ and reworked it into the song ‘The Four Horsemen.’

In a 2018 interview with Rolling Stone, Dave Mustaine stated that he and Cliff Burton were close friends and fans of Lynyrd Skynyrd. According to Mustaine, they were listening to ‘Sweet Home Alabama’ during a rehearsal when Lars Ulrich asked them to slow a part in ‘The Four Horsemen.’ Mustaine then hummed ‘Sweet Home Alabama’s riff to Ulrich, and the drummer thought this was a brilliant idea. So, they included the riff to the Metallica song, which was ripped off from the Lynyrd Skynyrd hit.

“Cliff Burton and I became really, really, really close. And I remember he had an affinity for Lynyrd Skynyrd. I remember driving to rehearsal one day. We were listening to ‘Sweet Home Alabama,’ and Lars Ulrich goes, ‘Oh, man, we have to slow this part down in the middle, man.’

Speaking to SiriusXM’s Volume the same year, Dave Mustaine said he loved Ronnie Montrose and his band Gamma’s song, ‘Four Horsemen.’ The singer said he did this song with his band Panic before joining Metallica. As Mustaine noted, he had a song named ‘Mechanix’ when he became a member of Metallica. When Lars Ulrich suggested Mustaine slow down his song, ‘Mechanix,’ he made a ‘jerk move’ and played ‘Sweet Home Alabama’ instead. Later, Metallica ended up revamping Mustaine’s song into their own version; ‘The Four Horsemen.’

In another interview with SiriusXM, Dave Mustaine elaborated on what happened back then:

“I had always called us, as a group, the ‘Four Horsemen.’ Before I was in Metallica, I loved this band called Montrose, whose guitarist was Ronnie Montrose. He went on to form a band called Gamma. One of their records [‘Gamma 2’] had a shark fin cutting through the grass, which I thought was awesome. Anyway, he had a song on there called ‘Four Horsemen’ that I did with my band Panic, which I was with before Metallica.

So when I joined Metallica, I had the song ‘Mechanix,’ which I wrote, and ‘Four Horsemen’ was my suggestion because we were doing cover songs. So that had planted the seed with James Hetfield. And one day, when we were coming to rehearsal, Lars had just said something about slowing down my song, ‘Mechanix.’ I had just gotten to the studio with Cliff Burton, and we had been listening to Lynyrd Skynyrd. I was being a jerk, so I played ‘Sweet Home Alabama’ instead of ‘Mechanix,’ and that’s the middle part of what would become Metallica’s ‘The Four Horsemen.'”

Below, you can listen to Metallica’s ‘The Four Horsemen’ and Lynyrd Skynyrd’s ‘Sweet Home Alabama’ and compare the riffs.

Chad Kroeger On Nickelback Being A Metal Band Rather Than Rock