Alicia Taylor: What We Know About Corey Taylor’s Wife

On April 7, 2019, Corey Taylor announced on his Instagram account that he got engaged to Alicia Dove, the founder of the dance and performance group ‘Cherry Bombs.’ In the Instagram post, Taylor shared a picture of Dove wearing her new engagement ring with the caption ‘L’adorilust. Forever. And Ever.’ As it turns out, Taylor asked her to marry him while the couple was having breakfast at their home in Las Vegas.

Six months later, on October 6, Corey Taylor got married to Alicia Dove. Their relationship started in May 2018, and they have been happily together ever since. Throughout the years, Corey and Alicia have stood together through thick and thin. Although Alicia is married to a globally famous musician like Corey Taylor, there isn’t very much information about her on the Internet. However, she is a talented dancer and performance artist who has also appeared on Taylor’s shows and music videos.

The Details About Alicia Taylor And Her Relationship With Corey Taylor 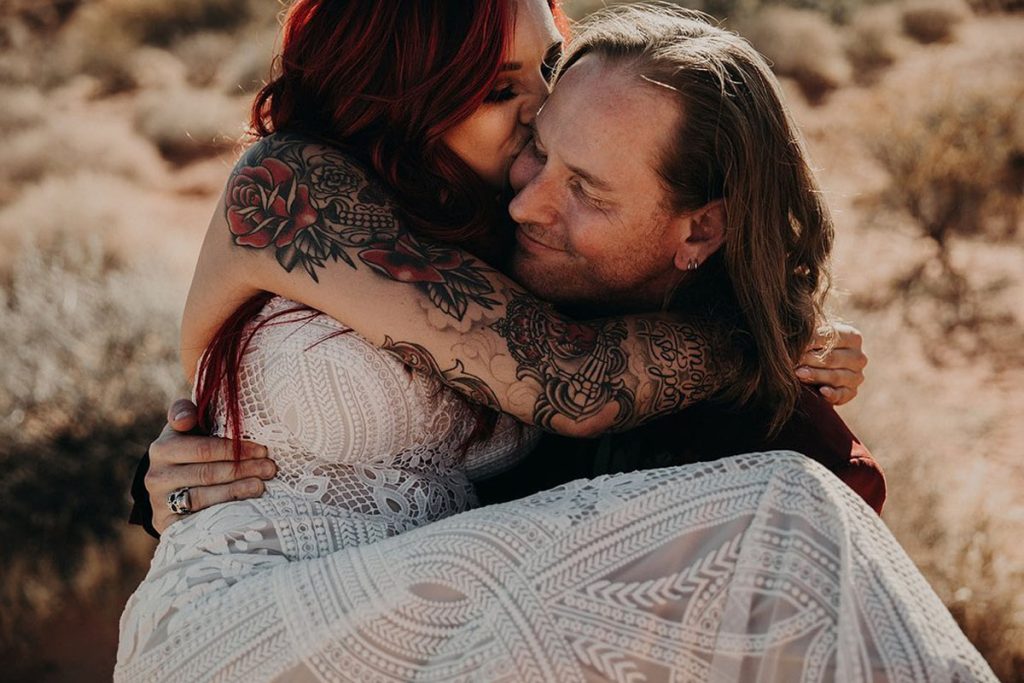 Alicia Taylor was born on January 16, 1985, in Los Angeles, United States. As of 2022, she is 37 years old. She is a metal music fan and a dancer who was a member of the NFL’s Atlanta Falcons cheerleading squad. Actually, she saw Corey Taylor for the first time while she was a cheerleader for the Falcons around 2010. They then saw each other again during a Slipknot show, but it wasn’t love at first sight. According to one of Alicia’s tweets, Corey shook everybody’s hand but hers.

“Jay and I ran into Corey Taylor at a Knot show. I was with a huge group of guy friends, and we thanked him for the tickets. He shook everyone’s hand but mine. He looked me dead in the eyes and turned away. I was like, ‘Wow, Corey Taylor is weird but OK.'”

Years later, in May 2018, Taylor and Dove confirmed they were in a romantic relationship when they posted photos of each other on their social media accounts. A year later, they got engaged and married soon afterward. The couple then happily shared their wedding pictures online. In the photographs, Alicia was wearing a beautiful white wedding dress, while Corey wore a suit matching his wife’s hair color. They also took pictures in front of their vintage all-black Shelby Cobra, which caused them trouble by breaking down on their way to a restaurant.

Taylor had a difficult time during his past relationship with his former wife, Scarlett. He struggled with depression due to the emotional abuse and neglect he experienced at a young age. After overcoming most of these struggles, he found Alicia and has been living a happy life with the beautiful dancer. They support each other’s work and stand by each other through hard times. Alicia appeared in the video clip of Corey’s single ‘CMFT Must Be Stopped,’ and Cherry Bombs opened for several of his shows, such as Stone Sour’s 2017 Hydrogradtour and Corey Taylor’s solo tour in 2021.

According to Alicia Taylor, she and her husband have many common interests and hobbies, and she’s in love with the Slipknot frontman’s intelligence. Describing Taylor as a well-read person, the dancer said he could talk about everything and has interests in various things like movies, music, sports, and more. So, the couple has found many ways to spend quality time together and talk to each other for hours.