Formed in 1963, the Yardbirds are a rock band that achieved great success throughout the mid-1990s with hits such as ‘For Your Love,’ ‘Shapes Of Things,’ ‘Heart Full Of Soul,’ and ‘Over Under Sideways Down.’ Besides, the band contributed to the electric guitar innovations of the mid-1960s and greatly influenced punk rock, progressive rock, and heavy metal bands.

Apart from their contributions to the music scene, the Yardbirds is also known for introducing three renowned guitarists; Jeff Beck, Eric Clapton, and Jimmy Page. The talented guitarist Eric Clapton started his music career in the Yardbirds back in 1963 and suggested Jimmy Page as his replacement. However, Jeff Beck joined instead of Page, but Page also joined the band later on.

Considering the current musical achievements of Jimmy Page and Eric Clapton, the Yardbirds significantly contributed to both musicians. Today, we will explore why Eric Clapton suggested Jimmy Page replace him in the band and why Page didn’t join the Yardbirds because of Clapton. 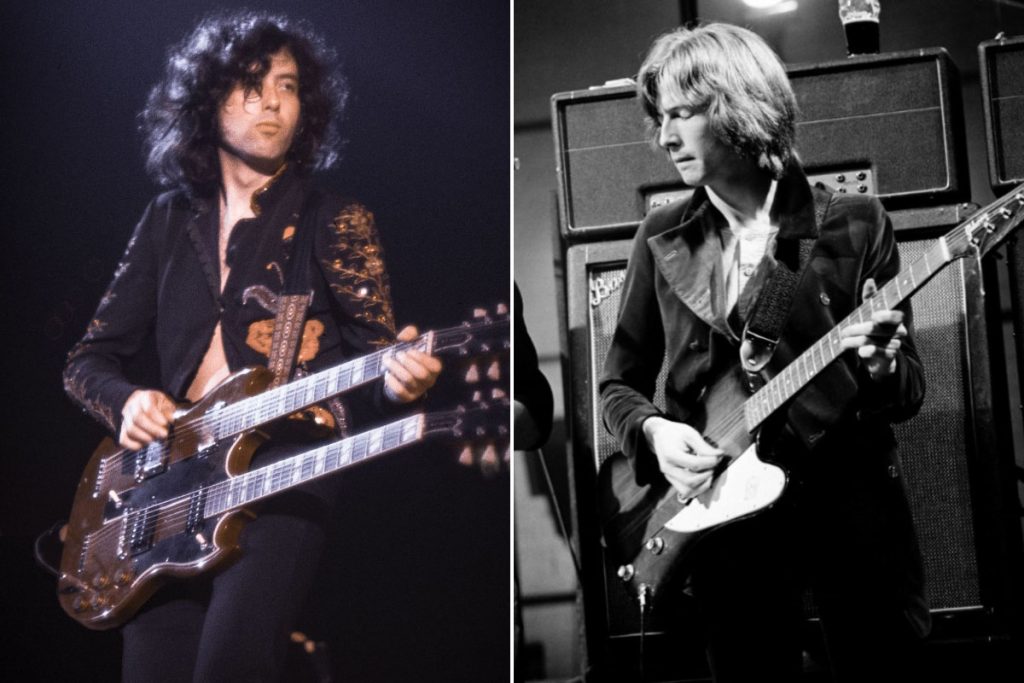 Back in the 1960s, Clapton and Page were close friends. When Clapton approached Page to replace him in the Yardbirds, Page didn’t accept the offer out of his respect for his friend. At that time, both guitarists occasionally spent time jamming together in the studio. However, one of those jam sessions had a negative impact on their friendship.

During that session, Page took the recordings and put them in the album ‘Blues Anytime: An Anthology of British Blues.’ This upset Clapton as he wasn’t aware that Page was recording the session and didn’t receive any royalties from the album. Later on, Page joined the Yardbirds to focus on playing guitar, giving up on being a producer.

In an interview with Fender, Jimmy Page talked about his tenure with the Yardbirds. He said that he was a studio musician back in those times, and he’d done sessions for Giorgio Gomelsky, the Yardbirds’ manager. According to the guitarist, Gomelsky asked him to join the band, and he didn’t because he felt uncomfortable as he knew Eric Clapton didn’t know about that.

Jimmy Page said Gomelsky approached him again later on while he was trying to make it as a producer. He said that he wanted to learn recording techniques and how things were done from the recording engineers. So, Page was content with what he was doing back then, and he recommended Jeff Beck for the job.

Ultimately Jeff Beck announced his departure from the band, and Page said it was a complete surprise for him. Then, Jimmy Page joined the Yardbirds to play the Telecaster. As Page said, he really wanted to find his guitar sound, and he had a chance to build his own identity within the Yardbirds. So, the guitarist tried to make his guitar feel like his own and put mirrors on it, thus creating his legendary 1959 Telecaster.

Jimmy Page told Fender in the interview that:

“I was a studio musician, and I’ve done sessions for this fellow called Giorgio Gomelsky, who actually was a manager of The Yardbirds. He’d asked me to join the Yardbirds at one point. I didn’t feel very comfortable about it because I knew Eric Clapton didn’t know, and I said, ‘No.’

And then he came up another time, and by that time I was a producer, I’d worked my way up. Being a studio musician, I took it on board as almost like an apprenticeship because I wanted to learn from the recording engineers certain techniques. I really wanted to learn how things were done.

By this time, I could read music, which meant that I could write it and do arrangements. And then I was producing as well, so I was in a really good sort of zone. When I had this second request to join, I said, ‘Well, I know somebody who’d be really good for this – Jeff Beck.’ And of course, he went in there and did amazing work.”

“Jeff and I had spoken before about playing together, and so he was an opportunity to do it, and I started off on bass and then quickly recruited Chris Dreja to take over the bass so I could do this sort of guitar stuff. It’s a bit of a mix of matching in the early days, but then Jeff sort of left the band and that was a complete surprise. The five Yardbirds became four, and so I started playing the Telecaster in that role.

I got to the point where I wanted to concentrate on this guitar and really make it my own. Being there in The Yardbirds, I was having to build my own identity within that group. To make it feel like my own instrument, I started putting mirrors on it, so that would be quite interesting in the light so you can use it in an optical way with the lights and shine, the mirrors on the people while you were playing, it was something that became quite kinetic as well.”

You can check out the interview where Jimmy Page talked with Fender about his career in the Yardbirds and his iconic 1959 Telecaster below.