Mötley Crüe drummer Tommy Lee shared a post on his official Instagram stories announcing the brand new music video for the famous rapper Post Malone’s song, ‘Motley Crew‘ which was obviously dedicated to the band. Furthermore, Lee is featured in the music video that took place on a racecourse while the two drove together.

Post Malone once released his single ‘Tommy Lee’ with Tyla Yaweh on June 12, 2020, for his upcoming second studio album ‘Rager Boy.’ The track was a tribute act to the drummer’s extravagant lifestyle as a world-famous rock star and the song brought two rap music lovers together as Lee previously revealed his passion for rap by forming a rap-metal band named Methods of Mayhem in 1999.

On top of releasing a song named after Tommy Lee, it was recently revealed that Post Malone’s upcoming single was going to be titled ‘Motley Crew’ via an Instagram story. Furthermore, Mötley Crüe drummer stated that the song was ready to be released and there’s a music video for the track that’s in the making including Tommy Lee in it.

After Tommy Lee’s announcement, Post Malone’s manager Dre London shared a sneak peek of the making of the music video for the track on his official Instagram page while celebrating the rapper’s 26th birthday. In the released video, Tommy Lee is seen dancing with Post Malone and pouring champagne all over him as the two new pals were having the best time celebrating Post Malone’s birthday with the ultimate party.

The track ‘Motley Crew’ and the music video were to be released today as revealed by Dre London’s previous announcement and Tommy Lee shared the good news with his fans via an Instagram story recently. The highly anticipated music video for the song is uploaded on Post Malone’s official YouTube channel and it already has more than half a million views in less than six hours.

Apparently, every fan of Post Malone and Tommy Lee was waiting for the collaboration as they left thousands of comments under the music video most of which stressed what a masterpiece the track is and praised the music video that involved racers and the two musicians as the winners of the race.

A fan commented under the video:

“Feel like I’ve been waiting years for this collab.”

Another one received hundreds of likes:

“Masterpiece. This dude is crazy!”

You can see the Instagram story and watch the music video for ‘Mötley Crüe’ below. 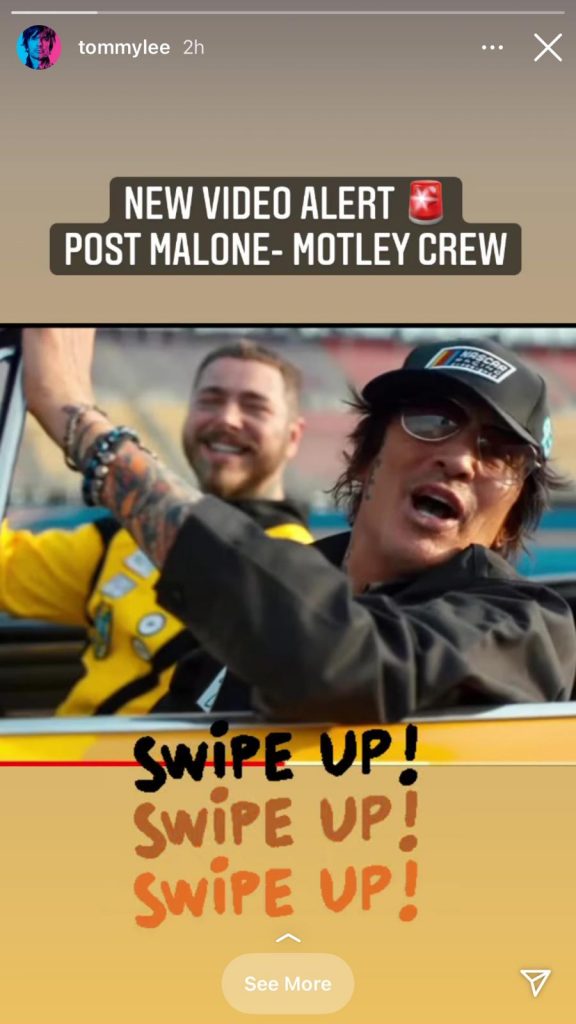