There are a lot of conspiracy theories that have aroused from the rock scene and one of them is related to the iconic song, ‘Wind of Change.’ Scorpions was formed in 1965 in Hanover, Germany, and it is considered to be one of the most influential bands of all time. They have sold 110 million records in total and have released 18 studio albums, 27 compilation albums, and 74 singles.

Scorpions rose to international fame in the mid-’70s which coincided with the Cold War period. One of their most well-known songs is without a doubt ‘Wind of Change’ which reflects the social and political changes that were occurring in Eastern Europe towards the end of the Cold War. While some embraced this song for its peaceful messages, others suspected there was a bigger plan behind it.

Who Wrote The Wind Of Change?

The records say that the person who composed and wrote the unforgettable power ballad ‘Wind of Change’ was the Scorpions frontman, Klaus Maine. The song was released in November 1990, just before the end of the Cold War. The song is often praised for its powerful lyrics and peaceful tone, both of which encourage the notion of worldwide peace.

Maine often referred to this track as a ‘song of hope‘ during live performances, and this was in a way true as it became the anthem of a peaceful revolution and thousands of protests in Europe. However, there were also some who claimed that Maine was instructed to sing the song by the CIA who were aiming to put an end to the Cold War.

Did The CIA Use The Wind Of Change To End The Cold War? 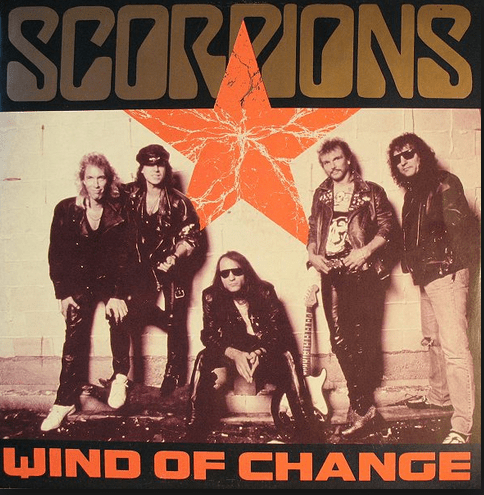 This conspiracy theory gained popularity quite recently when the well-known writer Patrick Radden Keefe contacted Maine in 2020 to ask him a couple of questions about the ‘Wind of Change.’ Years ago, Maine had stated that he got the inspiration to write this song while sitting in the Gorky Park Center and thinking about how the world had changed in the past years.

“The idea came to me in the U.S.S.R. when I was sitting in the Gorky Park Center one summer night, looking at the Moskva River. The song is my personal reappraisal of what has happened in the world in recent years.”

He told the same thing to Keefe but it seems like he wasn’t convincing enough. Sometime later, Klaus Maine found out about the writer’s podcast show in which he discusses whether the CIA wrote ‘Wind of Change’ to end the Cold War.

In his ‘eight-part investigation’ Keefe talks about the ‘proof’ he has collected from numerous people from Moscow to Kyiv, all of which prove that the conspiracy is indeed true. However, in later interviews, Maine kept insisting that this conspiracy theory is false and that he can’t believe that even credible sources are quoting Keefe.

In his latest interview on this subject, he had said that he feels ashamed to talk about ‘Wind of Change’ anymore as all the rumors around it make it feel like there’s a marketing plan. He then went on to say that the main aim of the song has always been to show the power of music and how it can change the world but was certainly not used as a ‘tool to help to bring down communism.’