Former Nirvana drummer and current Foo Fighters frontman Dave Grohl doesn’t seem to be the rock star who would get involved in arguments or feuds, especially over other bands’ music since Grohl has always demonstrated himself as a kind, loving, and thoughtful person who respects every form of art. However, things once got heated when his statements about the British rock band the Cult resulted in a song named ‘Bring Me The Head Of Dave Grohl.’

While there are countless disputes among rock stars that mostly start due to an unpleasant statement or disrespectful criticism about either their music or personal life, oftentimes both sides verbally respond to each other and let go of the matter after a time. There are also times the fight is crowned with a song that mentions the opposite side of the quarrel, however, there’s no fan that expected such a scenario to happen with Dave Grohl including. Let’s take a closer look into the timeline of Foo Fighters frontman and the Cult lead vocalist’s dispute.

The Feud Started When Dave Grohl Looked Down On The Cult 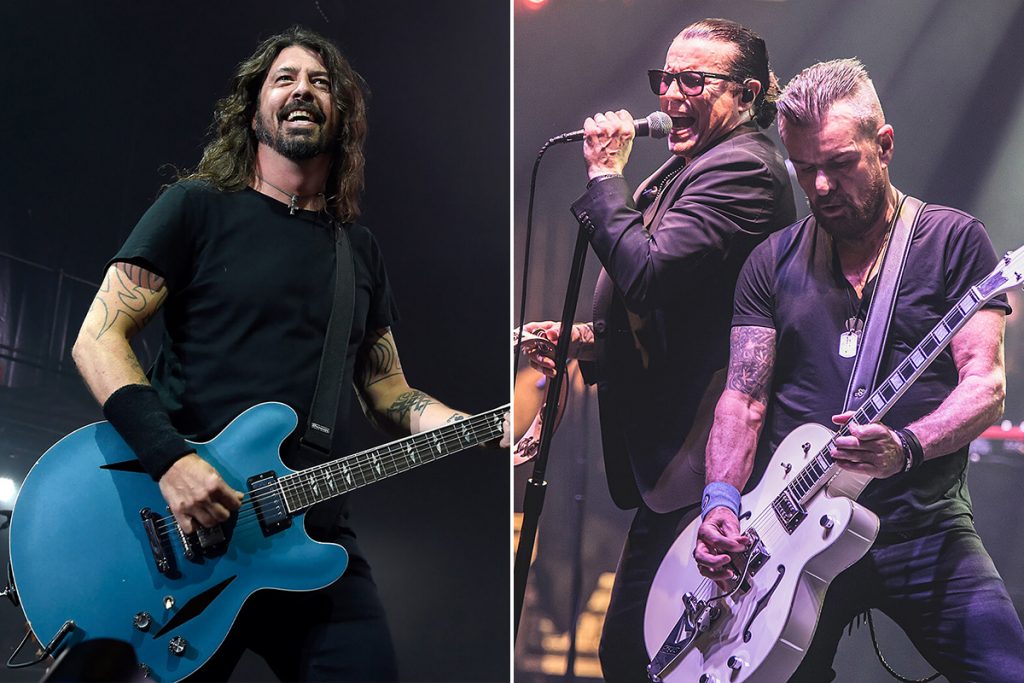 It all started when the Cult was recording their seventh studio album, ‘Beyond Good and Evil’ which was released on June 5, 2001. During the recording sessions, there was allegedly one demo song with a working title of, ‘Bring Me the Head of Dave Grohl,‘ and frontman Ian Astbury confirmed the title back then stating that the title was chosen after Foo Fighters’ frontman’s statements during an interview.

Apparently, Dave Grohl revealed his opinions about the Cult during an interview with Alternative Press and stated that he went to the band’s concert on a dare and thought their music was overproduced, thus, the whole performance felt like torture that made him want to shoot himself. After hearing these rude statements, Astbury came up with the song title as a reaction which wasn’t surprising to the fans, yet the song was never released with that title.

Ian Astbury And Dave Grohl Buried The Hatchet Years After Nearly two decades after, the Cult and Foo Fighters’ paths crossed at Portugal’s NOS Alive festival in 2017 as both bands performed on the second day of the festival. During an interview with Vanyaland on December 11, 2019, Ian Astbury revealed the time when Dave Grohl approached the band and held out the olive branch which ultimately turned things around for both sides and they ended things on good terms.

During the interview, Ian Astbury stated:

“He walked into our dressing room, walked straight up to me, and said, ‘Hi, I’m David Grohl. It’s really nice to meet you. Because I’m not sure what happened in the past, but hopefully we can put all that behind us, and I just want to say great to meet you.’

I shook the man’s hand. I have no problem with him. He’s an incredible artist. There’s room for everybody. If you don’t like it, don’t listen to it. But don’t put down a fellow artist, ever. I’m sure there have been times when I’ve said slight things about artists and later have gone away and gone, like, ‘Why did I say that? Was I jealous? Was it just a brain fart?'”

In addition to this, the Cult frontman stated that when the band first heard about Dave Grohl’s statements about their music, all the band members were offended as they respected and admired the Foo Fighters’ frontman as an artist, especially coming from him as he didn’t know anything about the Cult and heavily criticized them, they reacted with an impulse and revealed the song title, only to cancel it afterward.

In his own words, the Cult lead singer said:

“I think that, at that time, we were not too pleased with that. Especially from an artist like that who we actually admired. I mean, I admired him as an artist. I certainly didn’t feel an adversarial relationship with Dave Grohl. I thought Nirvana was amazing, though he was an incredible drummer, and perhaps he was just finding his feet in the world post-Nirvana early stages of Foo Fighters, and he just needed to go out and make a statement like that.

Although the feud started off pretty heated years ago, fans of both bands are glad that both rock icons Dave Grohl and Ian Astbury managed to end things in a respectful way as the Cult didn’t release the track with that title and Foo Fighters lead singer approach the band with a peaceful attitude. Ultimately, both sides appreciate each other as musicians and acted like how their fans would want to see them as well.