There’s no doubt that late Van Halen guitarist Eddie Van Halen had huge admiration and appreciation for the only three-time inductee to the Rock and Roll Hall of Fame, the iconic guitarist Eric Clapton. He previously opened up about how Eric is on top of his personal guitar heroes in multiple interviews. Furthermore, Van Halen guitarist has a guitar solo to prove his adoration to Clapton in the track, ‘When It’s Love‘ from the band’s legendary album, ‘OU812.’

As many of you know, Eddie Van Halen is widely considered as one of the all-time greatest guitar players in rock history and was an icon to all the guitar players in the world. However, every icon has their own heroes they once looked up to just like Van Halen guitarist himself who once opened up about his personal list of his influences during an interview with Rolling Stones in November 2011.

During the special interview which was recently released by the magazine, the legendary Van Halen guitarist revealed that the Yardbirds and Cream icon Eric Clapton holds the number one spot on his list of guitar influencers which helped him create his own playing style as well. While the list goes on with other outstanding guitarists such as Black Sabbath guitarist Tony Iommi, his pick for the number one was Clapton as always.

Eddie Van Halen’s admiration for Eric Clapton was so influential on him that he once claimed that he had learned almost all of his solos in the band Cream and changed his original choice of the guitar which was a Gibson Les Paul, and went on with the original P90 pickup on the bridge with a humbucker in order to sound like Eric Clapton at some point in his career. 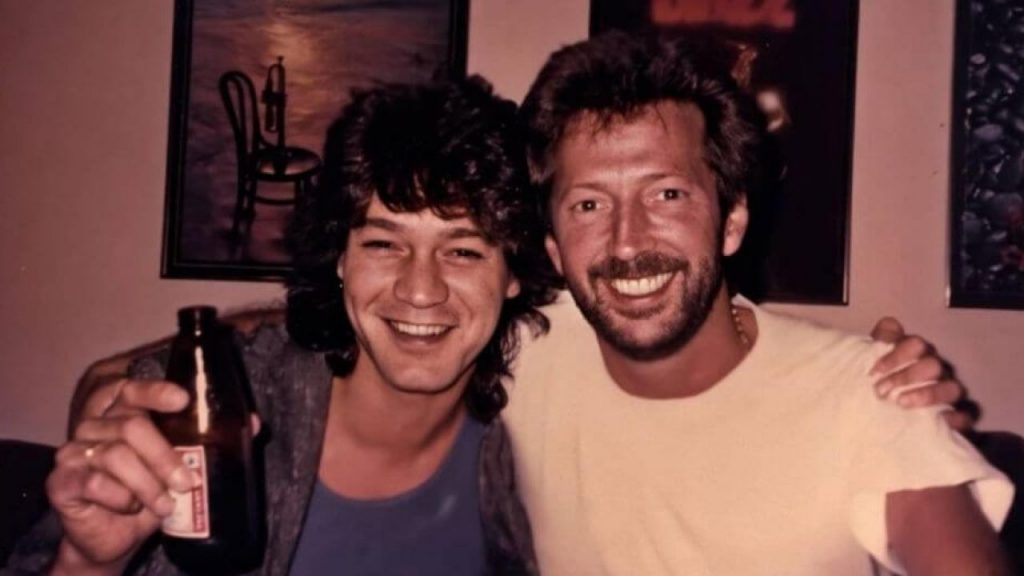 While there are countless musicians who reveal their rock gods during interviews and praise them while explaining how they influenced their own journey and the growth of their style of playing, there aren’t many guitar players that actually pay homage to their favorite guitar players with an actual guitar solo which is exactly what Eddie Van Halen did with the solo of ‘When It’s Love’ in the band’s 1988 album, ‘OU812.’

As some of you might remember, the power ballad ‘When It’s Love’ was released in June 1988 as a single from Van Halen’s eighth studio album, ‘OU812’ and became the most well-known song from that record after hitting number one on the Billboard Mainstream Rock charts as well as reaching number five on the Billboard Hot 100 chart.

The song which was a live performance staple since the day it was released, has a special aspect other than being often regarded as one of the best songs of Van Halen and one of the greatest power ballads of all time. Thanks to Eddie Van Halen’s huge admiration for Eric Clapton, he once revealed that he created the song’s guitar solo as a nod to Clapton. While fans are already fell in love with the track, the homage between two legendary guitar players melted their hearts even further with Eddie’s reveal.

You can listen to ‘When It’s Love’ below.