There must be countless musicians in the rock and roll world who have strong opinions about one another that are often being kept to themselves, however, that doesn’t mean that a number of bold artists make controversial statements about others every once in a while. This is exactly what happened a few years ago when Slipknot frontman Corey Taylor revealed his unexpected opinions about Imagine Dragons to whom he referred to as the world’s most hated band.

There’s no doubt that when Imagine Dragons came up with their debut studio album, ‘Night Visions’ which was released on September 4, 2012, nearly every music critics thought the band has something special to offer based on the record’s pop-rock sound, obviously reflected by the chart-hits, ‘Radioactive,’ and ‘Demons.’

Although their following albums gained huge success and made the and even more famous, most critics and a portion of their fans criticized Imagine Dragons for stepping out of being the new voice of rock with each record and turning into a regular band whose aim to sell records which were quite disappointing according to many.

While Imagine Dragons is undeniably one of the most successful bands of the last decade due to selling 20 million albums worldwide, being the most-streamed group of 2018 on Spotify, and having much more achievements under their belt, Slipknot singer Corey Taylor disagreed with millions of fans and started a notorious feud between him and Imagine Dragons frontman, Dan Reynolds. Let’s have a detailed look into this verbal fight between two frontmen which started a few years back.

How Did The Feud Start Between Dan Reynolds And Corey Taylor? 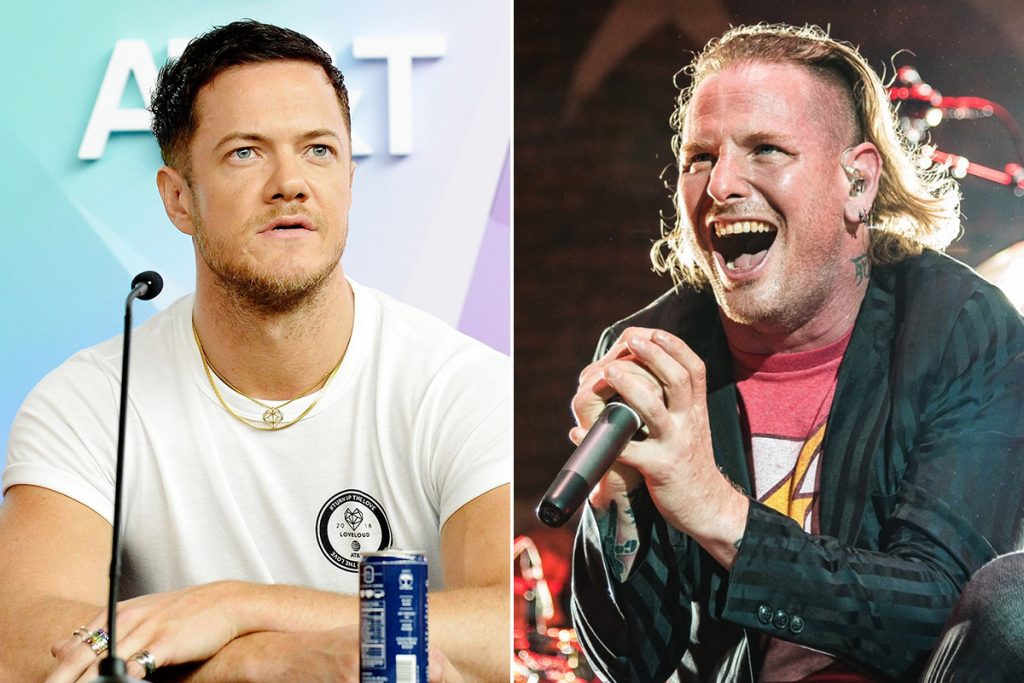 It all started when Corey Taylor revealed his opinions about Imagine Dragons during an interview with Sex Pistols guitarist Steve Jones’s radio show, ‘Jonesy’s Jukebox,’ on February 20, 2019. According to the Slipknot frontman, the band is terrible and they already taking over the throne of Nickleback when it comes to being the world’s most hated band which wasn’t the kindest way to address his criticism towards another band according to most fans.

Here is the statement that started the whole feud:

“They’re awful, so that’s cool. And they’re from Vegas, so I’m gonna go home to protests. Can’t show my face in this town now. Yeah, people are slowly coming back to appreciate Nickelback and then just turning their irksome ire toward Imagine Dragons.”

Only a week later, Imagine Dragons frontman Dan Reynolds shared a post on his official Instagram page, now deleted, and opened up about Corey Taylor’s statements as well as the overall music industry which should have included bands who support one another instead of bashing each other. Apparently, he had no hard feelings for Slipknot singer since the matter goes beyond him, and Imagine Dragons chose to stay on the side of love rather than fueling controversies such as this.

Here is how Dan Reynolds responded:

“For a decade now I’ve dealt with critics and other bands saying extremely harsh things about my band. Not what I would call ‘fair criticism’ which I always try my best to receive and learn from, but actual click-bait horse shit. Words filled with vile and hate meant to feed humanity’s need to laugh at each other’s imperfections and failures. I’ve stood silently and taken it for years. It has added to the depression I’ve dealt with since my youth. I don’t say this in search of sympathy, but just as a fact.

It’s not the person that causes me the feelings of stress and depression, but what it does to the world we, as a band, have created. How it could possibly make a kid feel ‘not cool’ listening to Imagine Dragons? I hate that thought. Wondering if my kids will be made fun of as they grow older because someone thinks my band isn’t cool.”

“I’ve gotten over the fact that guys in other bands, the 1975, Foster The People, Smashing Pumpkins, Slipknot, etc, feel a need to talk badly about my band for whatever reason. I don’t feel anger towards them, actually, just more of a sadness that this industry embraces, even celebrates, this mentality.

I wish it felt like a place where artists stood by each other and supported one another – regardless of our different tastes and voices. My bandmates are some of my best friends. We are authentically ourselves and strive to bring positivity and empowerment to the world.

We’ll continue to do just that.
X DR”