The Reason Jimmy Page And Jeff Buckley Cried Together

Jeff Buckley was a singer, songwriter, and guitarist who emerged as a session guitarist in Los Angeles and gradually gained an audience in the early 1990s by playing cover songs and his own material. After he attracted the attention of record labels, Buckley signed with Columbia. The musician then recruited a band and recorded his only studio album, ‘Grace,‘ in 1994. Although Buckley began working on a second album in 1997, he drowned while swimming on May 29, 1997.

Back when he was a young boy, Buckley was brought up around music as his mother was a pianist and cellist. Moreover, his stepfather introduced him to Queen, Jimi Hendrix, the Who, Pink Floyd, and Led Zeppelin at an early age. Buckley grew up singing around in the house and began playing guitar at the age of five. The first album he owned belonged to Led Zeppelin, which was the band’s ‘Physical Graffiti’ album. When he turned 12, Buckley decided to become a musician himself.

A huge fan of Led Zeppelin, Jeff Buckley also covered the songs from the band back when he was playing cover songs before he had his own musical material. Even at the time of the tragic drowning accident, he was swimming while singing Led Zeppelin’s ‘Whole Lotta Love.’ As it turns out, Buckley had a chance to meet one of his musical heroes, Jimmy Page, before his passing. When the pair first met, something quite interesting happened: they both burst into tears. Let’s learn more about what happened at that time. 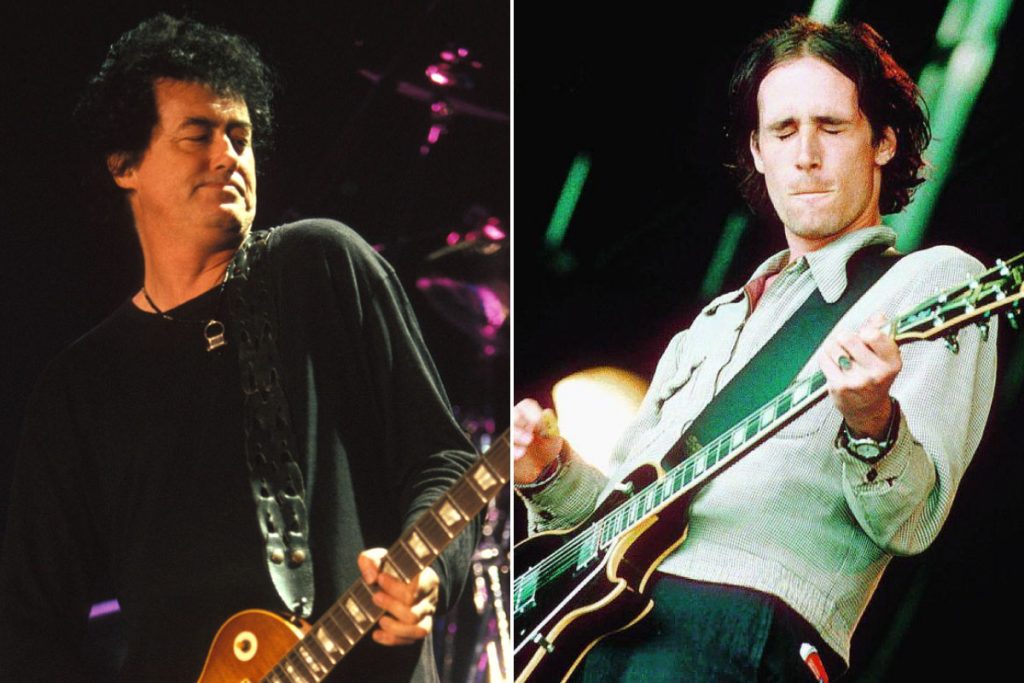 It is not unusual when a fan meets his musical hero and bursts into tears. However, one doesn’t expect the music figure they admire to cry as well. In this case with Jimmy Page and Jeff Buckley, things were quite different. According to Buckley’s close friend Chris Dowd, it was a deeply emotional experience for both sides.

Fishbone keyboardist Chris Dowd, who left the band in 1994 and released his 1997’s ‘Puzzle’ album with Jeff Buckley among the contributors, joined an interview with Uncut back in 2013 to reveal his thoughts on Jeff Buckley. In the interview, he also revealed that Buckley and Jimmy Page cried when they first met as it was quite an emotional moment for them.

According to Dowd, it was because Page heard himself in Jeff while Jeff was meeting his idol and the godfather of his music. Moreover, Dowd said Buckley could play all parts on all Zeppelin songs, including John Paul Jones’ basslines, John Bonham’s drums, and Page’s guitar parts.

As reported by NME, Chris Dowd told Uncut the following about Page and Buckley’s first encounter:

“Jeff told me they cried. They actually cried when they met each other. Jimmy heard himself in Jeff, and Jeff was meeting his idol. Jimmy Page was the godfather of Jeff’s music. A lot of people thought Tim was the influence on Jeff, but it was really Zeppelin.”

“He could play all the parts on all the songs. John Paul Jones’ basslines. Page’s guitar parts. The synthesizer intro on ‘In The Light’ – he could play it on guitar and it would sound just like it. And then he would get on the fucking drums and exactly mimic John Bonham.”

Following the release of Buckley’s album ‘Grace,’ Jimmy Page described the record as one of his favorite albums of the decade. As it seems, while Buckley was admiring him and seeing him as a great inspiration, Jimmy Page was also a fan of Buckley’s work. So, it is safe to say that it wasn’t a surprise the encounter of the pair resulted in such an incident.