The Reason James Hetfield Was Nervous To Perform For Steve Harris

Although Metallica is regarded as one of the greatest bands in rock history, there was a time when they were a young band trying to make a name for themselves in the music industry. Their success came pretty fast following the release of their debut album entitled ‘Kill ‘Em All,’ but they were just a promising band before the 1983 record.

This is why meeting their musical heroes before their breakthrough must have been an extraordinary experience for the band members. The frontman James Hetfield revealed a nerve-wracking encounter with Iron Maiden leader Steve Harris. Surprisingly the musician followed the band to their show, during which every band member, including Hetfield, was nervous about playing.

Metallica Is A Fan Of Steve Harris 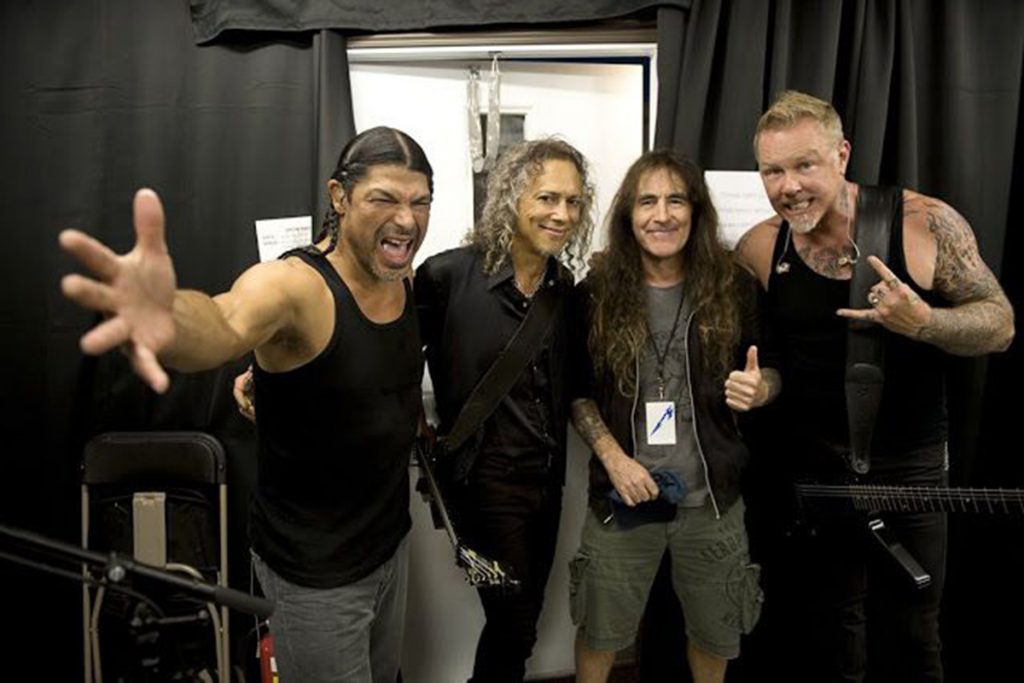 Metallica’s music is generally classified as thrash metal, and they are one of the best and most influential thrash rock bands of the 1980s and 1990s as a pioneer of the genre. Their style derives from the late 1970s new wave of British heavy metal bands, particularly from one of the best representatives of this wave, Iron Maiden.

In fact, all the Metallica members have pictures with the band leader Steve Harris from the early days of their career in 1989. Many decades after taking their nostalgic photo, a backstage photo from 2017 surfaced on the internet, which melted every fan of both bands’ hearts.

During a 2017 interview, James Hetfield reflected on spending time with other bands. The singer particularly remembered when the band was just formed back in 1981. While Metallica members were driving around Hollywood, they saw Steve Harris walking down the street. Because they were just dorky metalheads who had seen one of their icons, they called out for Harris.

Though they never thought the Iron Maiden founder would respond, Harris turned around and walked towards the Metallica members. The musician had a humble attitude towards the young band and even went to their show which came as a complete surprise to Metallica. Unprepared to be watched by one of their idols, the band felt obligated to step up their game.

While every single member, including drummer Lars Ulrich and Hetfield, were nervous about playing for Steve Harris for the very first time, they thought speeding up their songs would be enough to impress the musician. Though the band thought Harris would leave in the middle of the show, the rocker stayed until the end. Following the show, he got in their car and followed them to the hotel.

Recalling the time they spent with Steve Harris, Hetfield said:

“Well, obviously, hanging out with the Maiden guys always brings back great memories. I mean, it’s just weird to remember, you know, 1981 possibly? Hanging out in Hollywood, California, driving around with Ron McGovney, me and Lars in the backseat, and seeing Steve Harris walk down the street and us, you know, dorky, shy metalheads go, ‘Hey, Steve!’

And he actually turns around and starts walking towards us. That was like our first brush with somebody kinda cool and famous so that always stuck with me. Yeah, Steve Harris, a super-down-to-earth, really cool guy. And nothing has changed. I mean, he showed up at the show that we did.”

“It’s really cool when other musicians are hanging out, watching you do what you do. It takes it to another level. You’ve gotta kind of go to Olympic mode, and you step it up. Our setlist was at least five minutes faster than the set time. Lars was so nervous: ‘Oh, my God! Steve Harris is watching me,’ ‘Does this part sound too much like Iron Maiden?’

Usually, halfway through the show, you figure, ‘Okay, he’s gone, and he’s moved on to the next thing,’ but no. For the whole show, Steve was standing there; the whole show, to the very end. And not only was he there the whole time, but he also got in the vehicles with us, came to the hotel with us. Super-cool guy. And then we got to see them a couple of days later. And likewise, Maiden was super hospitable there.”