There’s a great number of fans who would consider Guns N’ Roses frontman Axl Rose as one of the greatest vocalists in music history, however, Rose isn’t only known for being an incredible musician since he must be one of the artists that have a notorious reputation for being involved in fights both physically and verbally over decades.

While there should be countless moments in Axl Rose’s career that shock fans, one of the most memorable moment must be the time when he got physical with another legendary musician, David Bowie, over her the love of his life, the muse for the iconic song, ‘Sweet Child of Mine,’ Erin Everly.

It all started when Guns N’ Roses decided to shoot the music video for the track, ‘It’s So Easy’ at their regular Hollywood hunting ground, the Cathouse club in 1989. Axl Rose had a concept for the video in his mind which he described as an uncensored type of production that included dressing his then-girlfriend Erin Everly in a whole S&M outfit in leather bondage gear, handcuffs, with a ball-gag in her mouth.

During the music video shooting, David Bowie attended the Cathouse club allegedly very drunk and in a mischievous mood. That’s when it all got heated since Bowie made a move to Guns N’ Roses frontman’s future wife, Erin Everly who already was wearing little to nothing for the shoot.

After seeing the iconic musician crossing the line with his girlfriend to whom he was madly in love, Axl Rose started chasing David Bowie in an attempt of punching him in the face. Cathouse owner Riki Rachtman opened up about the notorious incident and stated that Rose referred to Bowie as ‘Tin Man’ while chasing him for the purpose of a physical fight.

Here is what Rachtman said:

“It was basically the home away from home for Guns N’ Roses. They knew they could do whatever they wanted in that club. Now, when your security guard comes up to you and says, ‘Riki, Axl Rose is chasing David Bowie down the street saying he’s gonna kill him, what should I do?’ Well, how do you answer something like that? You’ve got one of your better friends, chasing one of your idols down the street. I guess what happened is Bowie tried to pick up Axl’s girlfriend Erin, and that pissed off Axl. That was when David Bowie was in the band Tin Machine. So Axl was running, yelling, ‘I’m gonna kill you, Tin Man!’” 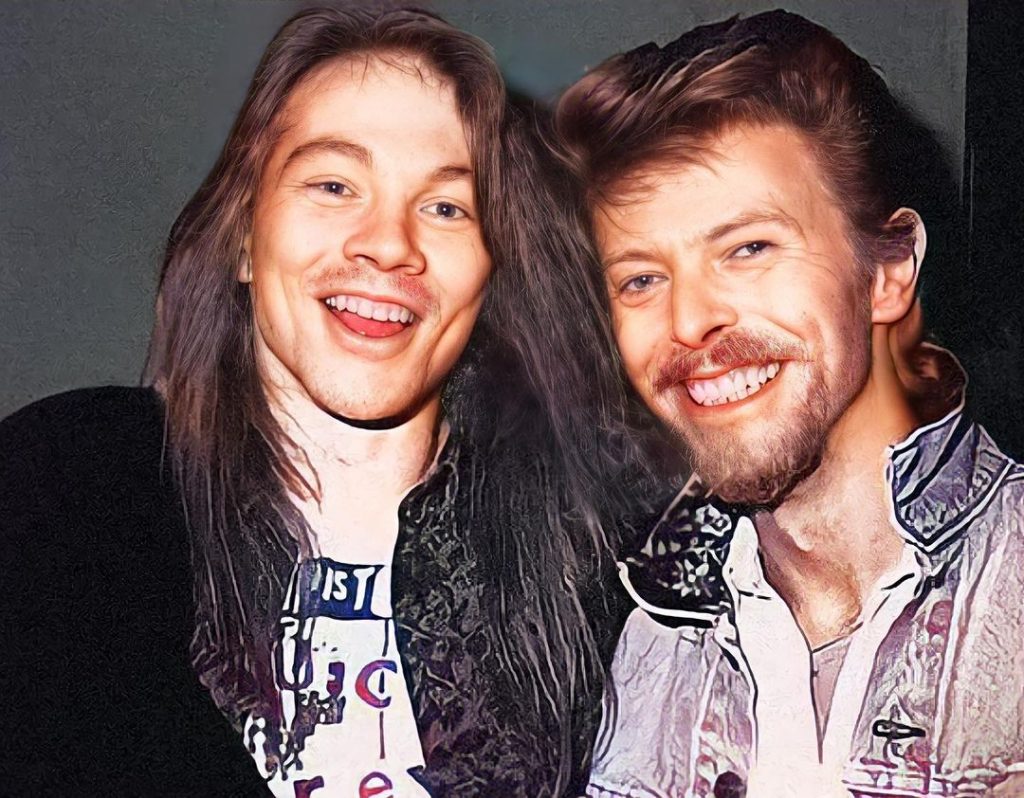 Believe it or not, the heated fight between Axl Rose and David Bowie had a happy ending when Bowie apologized for his actions which was thrilling to hear as Rose revealed that he even thanked Bowie for being the person to step up and express how sorry he is about his behaviors when the two iconic musicians were out for dinner.

Here is what Axl Rose said about Bowie

“Bowie and I had our differences. And then we talked and went out to dinner and then went down the China Club and stuff. And when we left, I was like, ‘I wanna thank you for being the first person that’s ever come up to me in person and said how sorry they were about the situation and stuff.’ It was cool, you know?”