Mötley Crüe drummer Tommy Lee‘s wife Brittany Furlan Lee recently shared a video on her official YouTube channel, revealing the first episode of ‘Worst Firsts Podcast with Brittany Furlan’ and her very first guest is no one other than Tommy himself, telling an interesting story about a first date during which he had to have sex with a girl to drive her shiny red Corvette.

As many of you know, all members of Mötley Crüe must have a few of the most hilarious and mindblowing stories when it comes to their love and sexual affairs thanks to their notorious, extravagant, and widely-known lifestyle, especially during the primetime of the band when all the drugs, alcohol, and women were coming and going easily during the endless parties.

However, one of these stories that belong to Tommy Lee may even surprise you after all these years due to the fact that Mötley Crüe drummer wasn’t even the rockstar the whole world knew when he decided to experience one of the most cringeworthy and funny incidents you’ll ever hear. Let’s take a detailed look at the time when Lee agreed to have sex with a woman in order to drive her car. 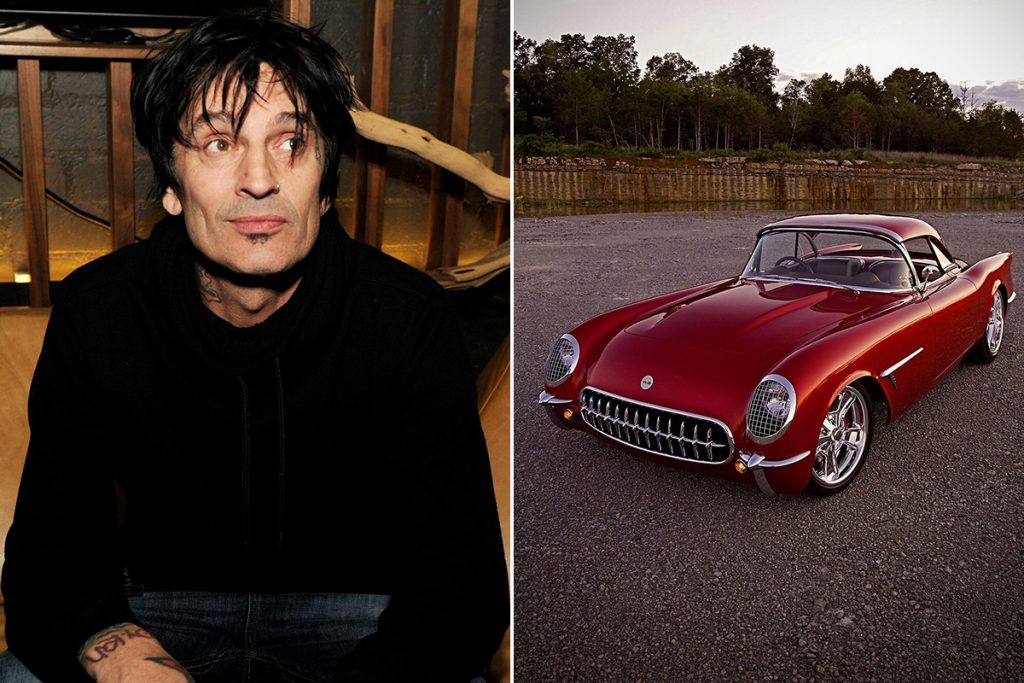 Brittany Furlan Lee started a series named ‘Worst Firsts Podcast with Brittany Furlan‘ during which her guests open up about their experience of a worst-first date. Realizing that there’s no better way to start the series with her husband who is able to blow her audience’s mind, Tommy Lee was Brittany’s first guest on the first episode.

In order to share his version of the worst date, Tommy Lee decided to reveal the time when he actually agreed on having a sexual affair with a woman who was a bigger size than the skinny young Lee. He was impressed after seeing her shiny brand new red Corvette since Lee was nowhere near affording it, therefore, he was quite determined to drive it.

Apparently, it all started when Mötley Crüe drummer asked the girl with the red Corvette if he can drive the car. The response was yes, however, with one condition. The woman stated that Lee can drive the car if he has sex with her. Surprised by the response, Lee was actually open to doing anything just to drive the beautiful car.

The whole incident happened right when Mötley Crüe was just becoming a band and the whole members were living in an incredibly dirty and disgusting apartment. However, the filthy apartment didn’t stop Tommy Lee from taking the girl there who was totally fine with that. The two had sex on the living room floor which wasn’t a pleasant feeling according to Lee who was trying not to touch the crunchy floor while was committed to his mission.

The moment Tommy Lee was thinking it couldn’t get any worse than that, other members of the band, lead vocalist Vince Neil and bassist Nikki Sixx walked in to see the legendary drummer having sex with a woman on the floor. Explaining himself and the reason why he’s actually doing what he’s doing, Lee stated that he has no regrets of the incident and everything was worth driving the red Corvette at the end.

Here is what Lee said:

“Here’s is this extra big voluptuous black girl, super cute face but she’s a big girl and she drove a red Corvette. You have to realize it I’m 17, I got no money, Mötley Crüe’s just starting out, and she pulls up in this badass brand new red Corvette and I was like, ‘Oh my god, Can I drive it?’ And she was like, ‘Oh you can drive it if you fuck me.‘

I was like, ‘God I wanna drive that car really bad. So I take her into our ghetto-ass apartment where all four of the guys lived in it’s on Clark Street at the corner of Clark Street and Sunset where the Whiskey a Go Go is. It’s just a shithole, we’re using hairspray with a lighter to kill cockroaches on the walls, our trash, we’re never bothered to take it down the trash place we’re just putting it out on the balcony and just stack up.”

“So I bring her into the house or the shithole, and we start talking for a little bit, and then she lays down on the floor in the living room and the rest of the guys weren’t home at the time so I was like, ‘This is my chance, no one will no, I’m gonna knock this out, I’m gonna drive the car and be like it just never happened.’

If you just picture me I’d weigh 155 pounds skinny, she’s big as hell so I get on top of her and start fucking her and I can’t really touch the ground, just picture. I’m just trying to stay afloat and keep my balance just so I can do this and get it over with ’cause all I really wanna do is to drive the fucking car.

And the guys walk in, Nikki and Vince open the door and there I am butt up face down. They walk in they’re like, ‘Dude! What are you doing?’ And I’m like, ‘I wanna drive her car.’ So I got up, gone out, drove the car and that was pretty much it. I don’t know if it’s a worst first but it’s pretty bad.”

You can watch the whole episode of ‘Worst Firsts Podcast with Brittany Furlan’ down below.