The iconic rock and blues guitarist Eric Clapton involved in one of the most famous love triangles in the history of rock and roll with The Beatles’ lead guitarist George Harrison and his wife Pattie Boyd who later fell in love with Clapton.

The Beatles’ George Harrison and English model and photographer Pattie Boyd got married on January 21, 1966, with a lovely ceremony with Paul McCartney as Harrison’s best man. However, in the following years of their marriage, the couple diverged from each other mostly because of alcohol and drug overuse, and numerous affairs.

Around the same time, Harrison started working with Eric Clapton and the two became close friends in time. Clapton spent most of his time together with George and his wife Pattie, which led Clapton to fall in love with his friend’s wife. In 1974, Boyd broke up with Harrison due to his continuous affairs with various women including Ringo Starr’s wife.

A few years after the divorce, Eric managed to make Pattie fall in love with him and the couple got married in 1979. However, the story of how the iconic guitarist convinced the ex-wife of his friend to marry him is one of the most interesting love stories of all time.

Did Eric Clapton Use ‘Voodoo’ To Steal Harrison’s Wife Pattie? When Pattie Boyd met George Harrison for the first time, she was in a relationship with photographer Eric Swayne. Even though she declined George’s date proposal at first, Boyd later ended her relationship with Swayne and agreed to go out with him. After dating for a couple of years, they got married in 1966 with Paul McCartney serving as Harrison’s best man.

However, their marriage wasn’t a perfect one mainly due to George’s substance abuse issues and his repeated infidelities.  Around the same time when they were having troubles in their marriage, Eric Clapton became close friends with Harrison and started hanging out with the couple quite often.

The young musician started to fall in love with his close friend’s wife. One day, Pattie received an anonymous love letter from someone who signed it as ‘E.’ A few days later, Eric revealed it was his letter by asking Boyd whether she received the letter or not. Yet, Pattie was still trying to avoid any possible feelings towards Clapton since he was engaged to a woman named Alice and also having an affair with her younger sister Paula Boyd.

In desperation for being loved by Pattie, Clapton paid a visit to blues singer and pianist called Dr. John, who was said to have voodoo powers. During his meeting with Dr. John, Eric took a small box of woven straw to carry in his pocket which included the instruction for how to cast the spell. After he did exactly what Dr. John told him to do, Clapton spent an alone night with Pattie, however, it was interrupted by Harrison’s surprise visit.

That night, Eric confessed to George that he was in love with his wife, yet Boyd went home with her husband leaving her admirer alone. Being rejected by the love of his life led Clapton to descend into heroin addiction.

Was Pattie The Muse For Clapton’s ‘Layla’ And The Beatles’ ‘Something’? 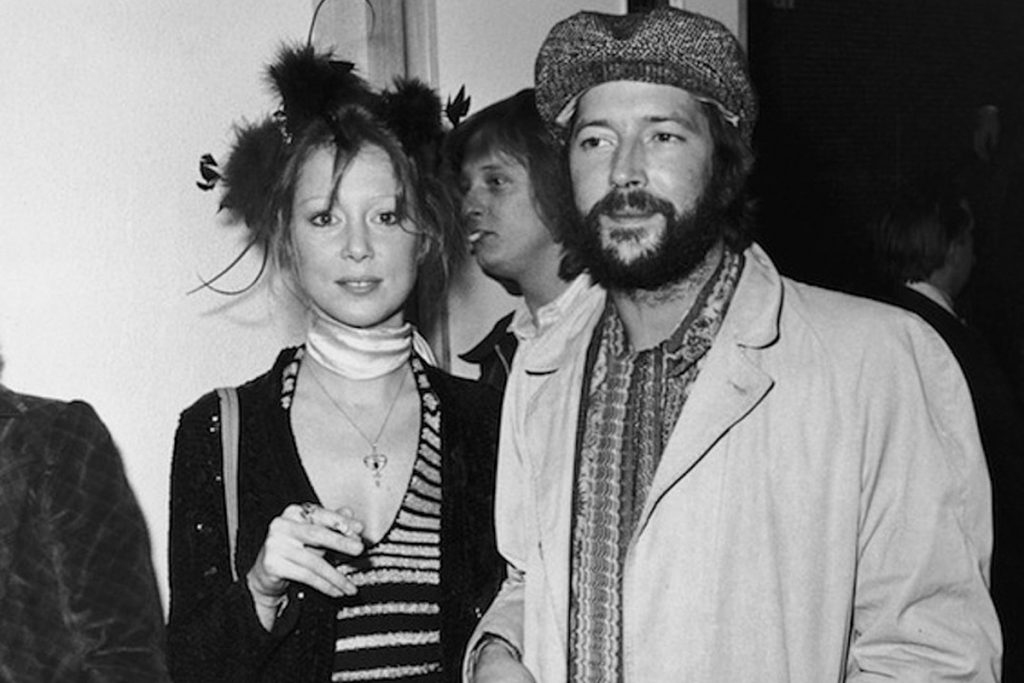 The Beatles released their iconic song ‘Something’ in 1969 as a part of the ‘Abbey Road’ album. George Harrison inspired by Pattie Boyd and their love while writing the lyrics of ‘Something,’ which became his first composition to become a Beatles A-side. However, George’s love song wasn’t able to prevent their relationship to end. Due to many problems caused by Harrison’s habits, the couple separated in 1974 and got divorced around three years later.

George wasn’t the only one who was inspired by Pattie Boyd and wrote a song about his love for her. After he confessed his love for his friend’s wife with a letter he sent her, Eric Clapton also asked Pattie to listen to a new song he had written. The song was Clapton’s ‘Layla‘ which described a man who fell in love with a woman who also loved him but wasn’t available.

While Eric was writing the lyrics of ‘Layla,’ he was actually influenced by a 7th-century love story which later became popular with Persian poet Nizami Ganjavi’s ‘The Story of Layla and Majnun.’ Clapton told Pattie to listen to the song he had written for her hoping it would convince her to leave George and marry him instead.

Here is what Pattie Boyd stated about Eric Clapton’s ‘Layla’ as she recalled the first time hearing it:

“The song got the better of me. I could resist no longer.“

In 1974, Pattie Boyd broke up with George due to his continuous affairs with various women including Ringo Starr’s wife. Five years after her divorce, Boyd got married to Clapton. Although the couple spent several happy years together, Pattie left Clapton in 1987 and divorced him in 1989. Eric Clapton later revealed he was an alcoholic who was often abusive towards Boyd.

How Eric’s Marriage With Pattie Affected His Friendship With Harrison Even though the two iconic guitarists became a part of one of the most popular and also complicated love stories in music history, both Eric Clapton and George Harrison never had resentment toward each other. Even when Clapton got married to Pattie after her divorce from Harrison, the two musicians managed to remain friendly. George even started calling Eric his ‘husband-in-law.’