Metallica frontman James Hetfield may be known for his extraordinary music career that spans over more than four decades as well as being regarded as one of the greatest vocalists and guitar players of all time. However, Hetfield has a passion for something else than just his outstanding music and it’s his remarkable car collection that involves every single classic car that car enthusiasts can easily fall for.

Although James Hetfield enjoys a variety of activities during times he doesn’t rock the world with his band, the musician most notably loves customizing cars and motorcycles in his garage. Being a lifelong car enthusiast, Hetfield’s classic car collection includes 1948 Jaguar ‘black pearl’, the 1934 Packard ‘Aquarius,’ the 1953 Buick skylark ‘skyscraper’, the 1937 lincoln zephyr ‘voodoo priest’, and many more.

In addition to having, modifying, and driving these remarkable cars, Metallica singer also donated some of his cars previously in order to donate their income for the charity. He once put his 1968 Chevrolet Camaro up for sale on eBay and the proceeds went to a Music for Schools program. The car that was used in the video for ‘I Disappear’ was given to him as a gift and he donated it to the Hard Rock Cafe, and it is featured in the movie ‘Hard Rock Treasures.’

In 2020, James Hetfield donated some of his classic cars from his collection to the Peterson Automotive Museum for the exhibition entitled ‘Reclaimed Rust: the James Hetfield Collection.’ The exhibit included the iconic rocker’s cars, guitars, photos, and there was a featuring video released in which the musician revealed a detailed explanation of his car collection. Let’s dive into that monumental video and see Hetfield’s majestic cars. 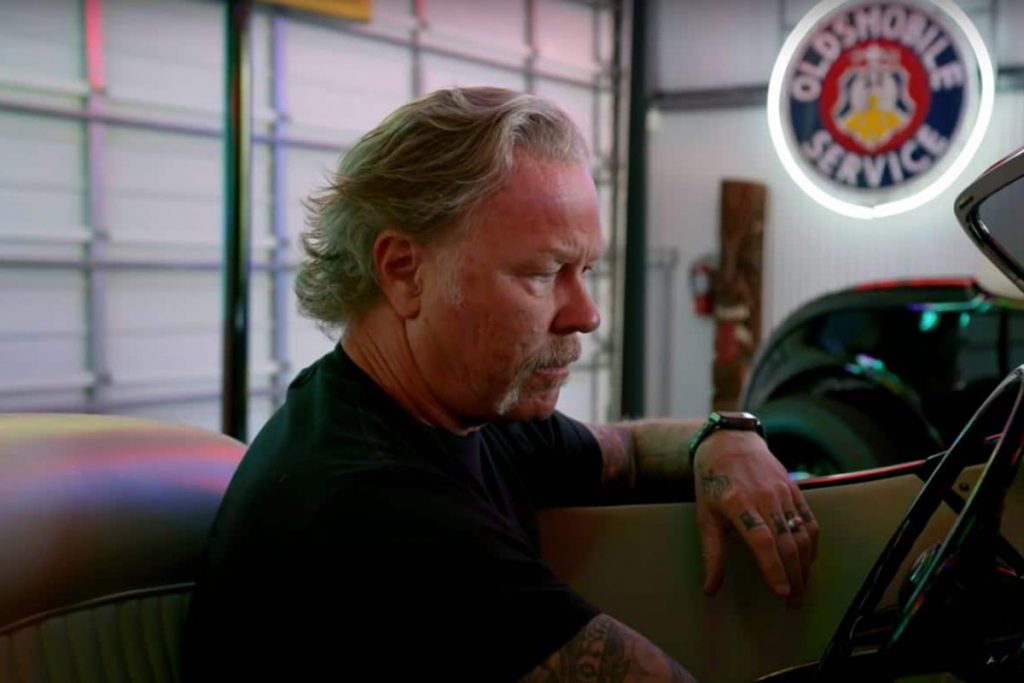 After it was announced that James Hetfield was donating ten of his classic custom cars to the Petersen Automotive Museum in Los Angeles for an exhibition, the musician joined with the Petersen Automotive Museum in providing a teaser video for the exhibit. The video showcases a number of Hetfield’s stylish vehicles in addition to the beginning of his love for classic cars.

Hetfield speaks in the video about his love for cars and how it started in his own garage in which he has built up some of his vehicles from scratch. Apparently, the musician grew up in a household where his father bring a project home whether it’s fixing a car or a boat which gave Hetfield the creativity he needed as a child. Fixing the cars in the garage with his father got him excited as a kid and that’s when his love for cars first started.

In addition to this, Metallica’s frontman expressed how he sees old cars, and apparently, he thinks every single or of them still has a story to tell. Therefore, they need to be brought back to life like a rebirth which reminded him of humans since we all end up being reborn every once in a while just like these cars.

“Reclaimed Rust to me means that you take an old guitar and it’s sitting there with songs still in it, waiting for someone to pick it up and bring life into it. That’s what I love and I’ve done that with many of these cars. I have seen cars sitting in a field in Kansas and thinking they’ve got a story to tell, still, so let’s bring this back to life like a rebirth. I think every human in a way ends up going through a rebirth at some point, there are many ways of being reborn. I think these cars deserve another chance.

I’m James Hetfield, a dad, and husband. I am a singer and guitar player for a band called Metallica and I am obsessed with cars. I grew up in southern California, my dad would every once in a while come home with a new project whether it was a car or a little boat or something. He was always in the garage tinkering around so there was always a creative kind of flow in that house that just got me excited.”