Elton John shared a post on his official Instagram account to clarify his current health status after a concerning photo that was taken a short time ago. The singer explained the true story behind the picture and highlighted that the claims about his health issues were utterly false.

John’s ongoing farewell tour named Farewell Yellow Brick Road started on September 8, 2018, in Allentown, and everything about the concerts was going great until the global pandemic. The musician decided to cancel and reschedule some tour dates to 2021 and 2022 due to restrictions to protect public health. Later, John continued his live performance, but he postponed some shows in Europe and the UK because of health issues.

The pain in his hip, which was caused by falling on a hard surface, was too unbearable to continue, and he shared his gratefulness for his fans’ understanding and support. The tour’s North America leg began on January 19, 2022, in New Orleans and ended in Miami on April 28, 2022. The Europe concerts kicked off on May 21, 2022, in Fornebu, and they were planned to finish on July 4, 2022. The next stop will be North America again.

However, his fans became concerned about his health again after John was photographed in a wheelchair at Leipzig Airport, and they saw the headlines about ‘looking frail.’ The famous musician ensured everyone that he was very well, and the tabloids were nothing but full of silly stories. So, fans can take a deep breath about this situation, especially those waiting to watch John live for years.

Elton John highlighted that he gave his 100% in every show for them, and therefore, he could feel exhausted later, and he needed to wait in a wheelchair while waiting to get into the plane. None of his fans shouldn’t be worried about his health, and the rest of the tour will be as excellent as before without any problem. John also thanked his fans for their kind wishes and endless love.

“I want to thank all my fans for reaching out to ask about my health after the tabloids ran a silly story about my’ looking frail’ in a wheelchair. The true story is that I’m in top health, loving my shows and playing and singing at my very best. I give 100% every night and never want to disappoint, especially after everyone has waited so long to get back to seeing shows. Your response to every show has been phenomenal, and I love every minute of it.

After another rousing 2.5-hour show, we arrived at Leipzig airport just before curfew to find part of the airport had closed. It was an extremely long walk to get to the plane, so my team kindly laid me in a wheelchair so I could rest my hip after doing the show. That’s all, folks. Last night was another blockbuster show in Bern, and I’m looking forward to seeing everyone at this weekend’s sold-out show in Milan.

Thanks for all your kind words of support!”

You can see the photos below. 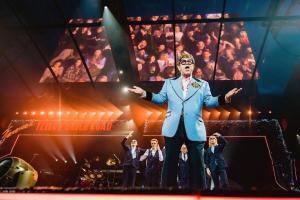