There may be countless reasons why Ronnie James Dio is regarded as one of the greatest and most influential heavy metal artists of all time by numerous respectable music critics and fans since the musician had achieved every possible accomplishment during his lifetime every other rocker can dream of. The musician also fronted or founded numerous groups throughout his career that spanned over more than five decades including Elf, Rainbow, Black Sabbath, Dio, and Heaven & Hell.

In addition to his extraordinary music career with all of these iconic bands, Ronnie James Dio is also known for popularizing the ‘Metal Horns’ hand gesture in metal culture. The musician claimed to learn the gesture from his Italian grandmother who used it to ward off the evil eye. Dio first started using the sign soon after joining Black Sabbath in 1979. Since previous lead singer Ozzy Osbourne had a trademark sign due to frequently using the peace sign at shows, Ronnie James Dio wanted to create his own signature hand gesture with the fans.

Following the first Black Sabbath tour with Ronnie James Dio in front, the devil horns became widely famous in metal concerts and the signature gesture became adopted by all of the heavy metal fans. Although it wasn’t the Black Sabbath singer who invented the devil horns and other rockers claimed to have the sign as their own, there’s no doubt that it was Ronnie James Dio who turned it into such an iconic symbol of metal music. Therefore, it would only be fair if there were to be a devil horns electric guitar that’s dedicated to Dio himself. 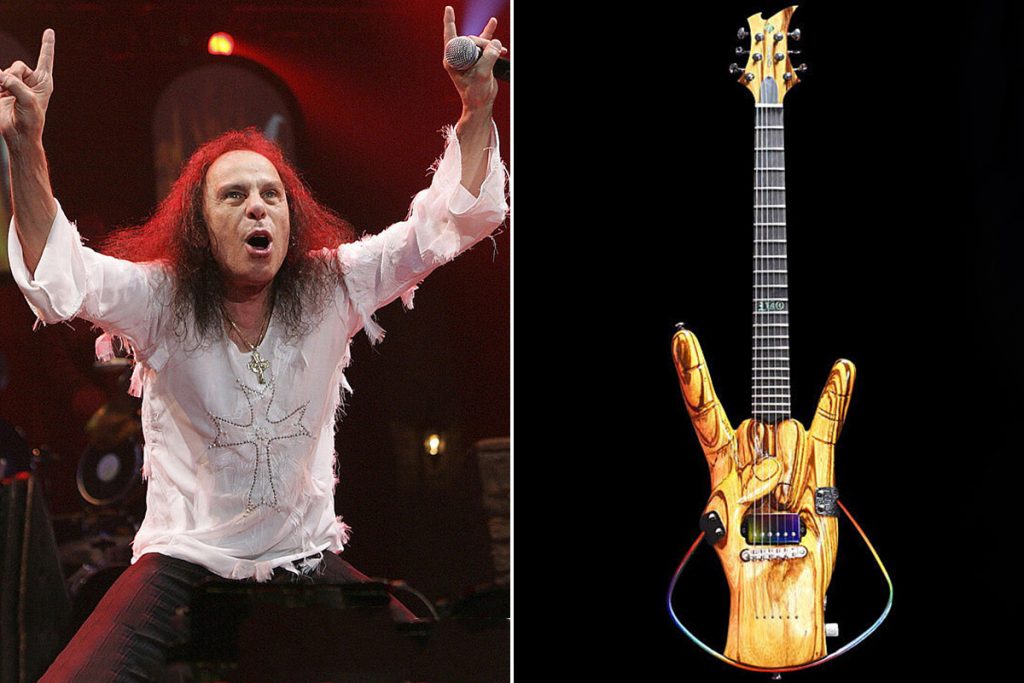 A UK-based brand named Cynosure has been creating one-of-a-kind handcrafted electric guitars for Bloodstock Festival every year since 2014 for the event’s art gallery based on a theme. Since the 2020 Bloodstock Festival was canceled just like every other public gathering due to the coronavirus pandemic, this year’s event had to be bigger than ever considering the fact that it’s the 20th anniversary of the iconic metal festival.

Cynosure made four exceptional custom electric guitars including one inspired by Ronnie James Dio’s signature hand gesture, metal horns. In order to pay tribute to the 10th anniversary of the musician’s death, the company came up with an idea to honor Dio by creating an iconic six-string guitar that exactly looks like his iconic sign.

During an interview with MusicRadar, Cynosure’s Oliver Andrew revealed the inspiration and process behind each guitar and stated that it was incredibly difficult to create a guitar in the shape of devil horns. However, since the gesture best defines Ronnie James Dio, the team was up for the challenge and it’s fair to say that they did not only pull it off, they came through as the guitar looks breathtakingly beautiful.

During the interview, Andrew Oliver said:

“It was a pain in the bloody arse! Haha! It was exceptionally difficult, but we could not think of anything more iconic and synonymous with Dio. It’s instantly recognizable. If you walk into a gallery and see this guitar on the wall, you don’t need to be close to recognizing what it is. But in terms of playability and ergonomics, it was a complete pain!”

There’s no denying that Ronnie James Dio had an extraordinary influence on the history of metal music prior to his passing on May 16, 2010, at the age of 67 after being diagnosed with stomach cancer. Regardless of his presence, Dio still continues to be a source of inspiration to countless people and companies including Cynosure who created one of the coolest guitars in the world thanks to Dio and his legacy.
Black SabbathRonnie James Dio