The Rolling Stones‘ icon Keith Richards who is often regarded as one of the best guitarists of all time throughout his music career that spans over an impressive six decades including countless accomplishments that created the legacy of Richards as well as being honored by a number of magazines such as Rolling Stone when they referred to him as the creator of rock’s greatest single body of riffs on guitar.

While he’s undoubtedly one of the most influential and greatest guitar players of all time, Keith Richards isn’t known for getting along with other legendary bands let alone liking them very much as he has a number of bold statements during interviews about them to prove it.

Despite the fact that most musicians prefer to keep their opinions about other artists to themselves in order to stay away from being the target for harsh criticism from their fans and to not sound bitter, the Rolling stones guitarist seem to not afraid of any backlash since he once referred two of the most important bands of all time, Black Sabbath and Metallica as great jokes during an interview with the New York Daily News.

Here is what Richards said:

“It sounds like a dull thud to me. For most bands, getting the syncopation is beyond them. It’s endless thudding away, with no bounce, no lift, no syncopation. Millions are in love with Metallica and Black Sabbath. I just thought they were great jokes.“

The list of artists who were heavily criticized by Keith Richards also includes the Beatles and their eighth studio album, ‘Sgt. Pepper’s Lonely Hearts Club Band‘ which is often considered as artwork with an extensive aspect, however, it’s nothing but trash according to Richards as he revealed during an interview.

Here is what the iconic guitarist said:

“The Beatles, chicks wore those guys out. They stopped touring in 1966 –they were done already. They were ready to go to India and s—. … There’s not a lot of roots in that music. I think they got carried away. You’re starting to do Sgt. Pepper. Some people think it’s a genius album, but I think it’s a mishmash of rubbish, kind of like Satanic Majesties. ‘Oh, if you can make a load of s—, so can we.'”

While there’s no possible way of listing all the bands and musicians that couldn’t attract Keith Richards’ favor, there was one time he opened up about one of the most iconic bands of all time, Led Zeppelin and its band members one of which Richards actually admires. Let’s dig deeper into the relationship of the Rolling Stones’ guitarist and Led Zeppelin members.

What Does Keith Richards Think About Led Zeppelin? 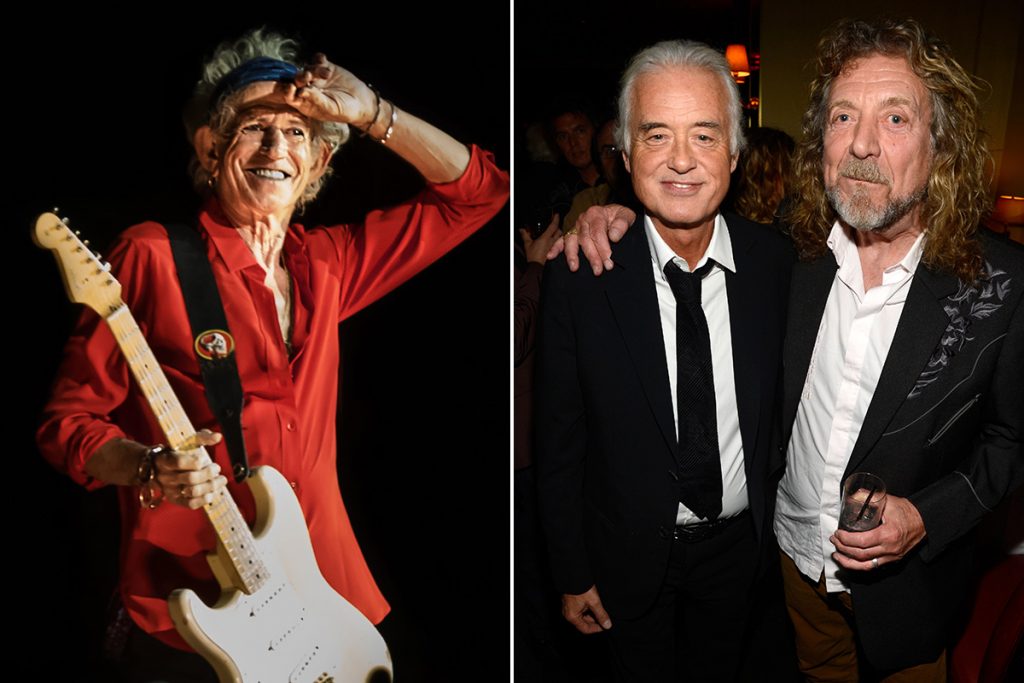 There’s no doubt that Led Zeppelin is considered one of the most successful, innovative, and influential bands in music history both by critics and fans thanks to being one of the best-selling music artists of all time with eight consecutive UK number-one albums and six number-one albums on the US Billboard 200, five of which certified Diamond in the United States.

However, Led Zeppelin isn’t Keith Richards’ favorite band as expected and he opened up about his opinions quite a few times during interviews and his opinions don’t seem to change over the years as he once stated that Led Zeppelin worths as much as the lead guitarist Jimmy Page and nothing more according to him.

During a more recent interview back in 2015 with Rolling Stone Magazine, the legendary guitarist stated that he only likes Jimmy Page who is an amazing guitar player according to him and there’s something dull about Led Zeppelin as a whole band that seems to clash with Richards’ taste in music.

Here is what Richards said:

“I love Jimmy Page, but as a band, no. With John Bonham thundering down the highway in an uncontrolled 18-wheeler … He had cornered the market there. Jimmy is a brilliant player. But I always felt there was something a little hollow about it, you know?”

Despite fans would love to see the members of two of the most important music acts in history having admiration and respect for each other, they are still glad that Keith Richards was less brutal towards Led Zeppelin members while actually bashing them while praising Jimmy Page with whom the Rolling Stones collaborated on a track named ‘Scarlet’ back in the day and released freshly in 2020.

You can listen to ‘Scarlet’ right below.