In the early ’80s, Nikki Sixx decided to leave his band London and started working on new records with drummer Tommy Lee and vocalist/guitarist Greg Leon. Ultimately, they founded Mötley Crüe on January 17, 1981. However, Leon decided not to continue with them, so Sixx and Lee started to look for their new lead guitarist. They placed an advertisement on The Recycler, and they met Mick Mars.

Their next mission was finding their lead vocalist, and Lee and Mars suggested that Vince Neil should join them. Neil refused their offer, but he accepted to become Mötley Crüe’s frontman when Rock Candy’s other members shifted their focus towards their personal projects.

Why Did Tommy Lee Refuse To Be Mötley Crüe’s Lead Singer?

In time, Mötley Crüe members Nikki Sixx, Vince Neil, Tommy Lee, and Mick Mars became more and more famous. They got a reputation as the most notorious band due to their rock and roll lifestyles which led to near-death experiences and numerous scandals that no one can forget.

Therefore, former Van Halen frontman Sammy Hagar once asked why a person like Tommy Lee, who has drawn more attention than the band’s lead singer Vince Neil, didn’t choose to become Mötley Crüe’s lead singer. Lee explained this, saying that he wished to be on the front as a drummer, and he decided to use unusual and extreme stage techniques during Mötley Crüe’s performances.

In Lee’s words, he said:

“I think that that was one of the reasons. I’m not that kind of personality were being in the back, playing drums isn’t enough for me. I wanna be up there, be the ringleader, turning upside down… That started all of them for me. I wanted to do something spectacular. I remember my very first concert, I wanted to go to see Tommy Aldridge was playing drums.

He’s a badass drummer and I’m sitting there and he’s performing that drum solo. I’m looking around and everyone was leaving. People were going to get a beer, buy a shirt, bathroom. It freaked me out so much that I was like ‘I understand why they are leaving.’ No one can see what’s he doing technically and there was a big wall of drums there. All of you see is sticks flying.

That inspired me in the other drum solos and take it up full and show people what’s going on back there. So I started rotating the drums halfway, spinning around on a roller coaster which you can see the new one that I’m building right now. It’s insane.”

Tommy Lee’s Career As A Drummer 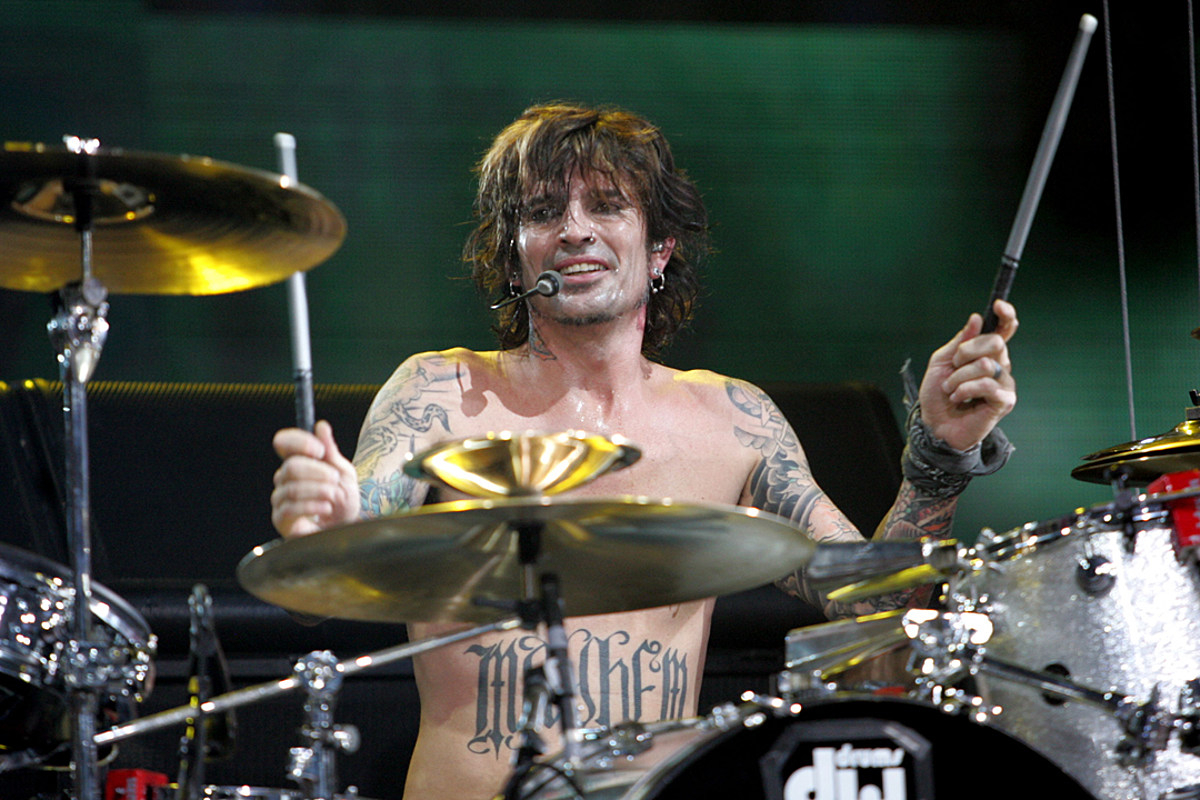 Tommy Lee realized that people couldn’t see a drummer’s performance no matter how good he was when he went to watch Tommy Aldridge. Thus, he decided to make a difference and is now considered one of the most talented and famous drummers of the rock and metal scene. Lee got that title thanks to his experimental approach to playing the drums including revolving, spinning, and performing upside down.

Consequently, it can be said that Tommy Lee found a way to be a drummer who can draw the audience’s attention and steal the show from every lead singer. Lee understood that being talented wasn’t enough while playing behind the gigantic drums, so he had to show his performance using various techniques and styles.

You can check out Tommy Lee’s conversation with Sammy Hagar.