Guns N’ Roses lead singer and lyricist Axl Rose has been the band’s only constant member since their formation in 1985. He managed to create a notorious reputation for himself and his successful music career with his band. Most of the time, numerous musicians who have previously worked with Rose have mentioned how hard it is to see eye to eye with the rocker mainly due to his aggressive behavior.

Jon Bon Jovi, on the other hand, has always been referred to as the ‘good rocker’ in the rock and roll world and even People magazine named him one of the ‘50 Most Beautiful People in the World‘ in 1996. Throughout his tenure with his band Bon Jovi, he has released fifteen studio albums as well as two solo albums, all of which make him one of the greatest musicians in the rock scene, especially when considering his exceptional songwriting skills.

When taking both musicians’ distinctive public images into consideration it wouldn’t be surprising to hear they had a feud back in 2006. However, it’s unexpected to find out that the reason behind the verbal dispute was actually Jon Bon Jovi’s envy and resentment toward Axl Rose.

Even though it’s hard to believe that the charismatic musician openly expressed his jealousy of the Guns N’ Roses frontman, it’s even more shocking to hear Rose ignored the opportunity to clap back at Jovi. Let’s dig deeper into one of the most cringeworthy reveals in the history of rock and roll. 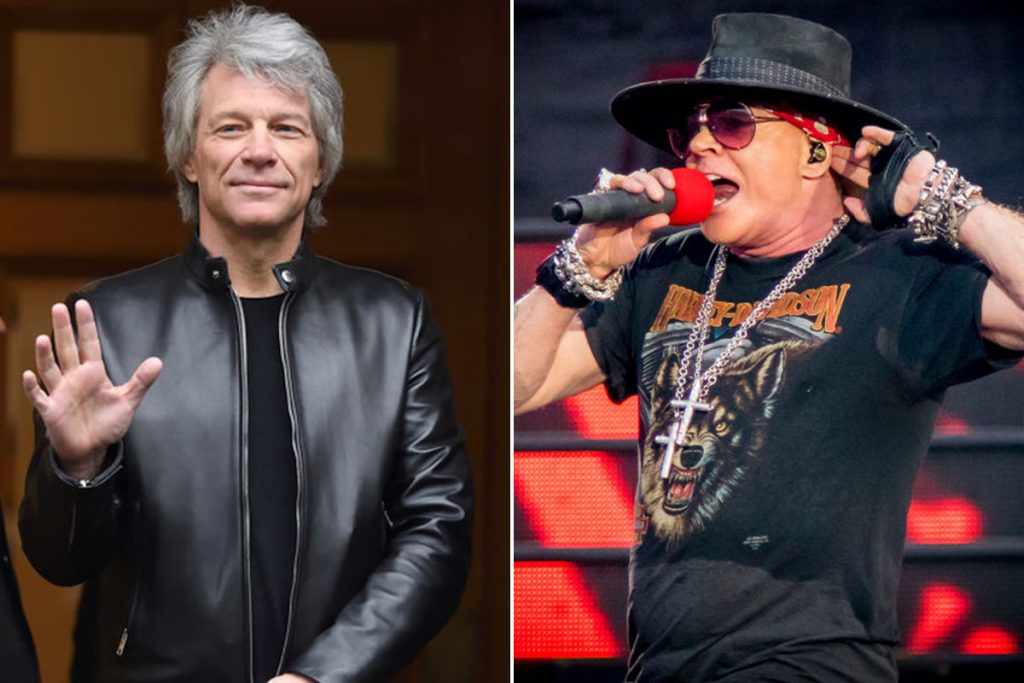 There’s no doubt that the press and fans have always loved a troubled frontman in rock and roll history especially because they often cause a scene that can be considered as ‘entertaining’ in most cases. While nobody has questioned this fact since it has always been like this due to the nature of rock and roll, apparently, Jon Bon Jovi finds this system unpleasant.

During an interview with the New York Post, Bon Jovi’s frontman opened up about the rivalry between him and the Guns N’ Roses frontman. The musician expressed his disturbance about Axl Rose receiving more attention from the media than he does just because of his ‘bad boy image.’ The musician also criticized the system by stating that Rose hasn’t made a record in more than a decade, therefore, the attention is injustice.

According to the Bon Jovi singer, Rose has been making the headlines with his bad-boy legacy rather than his music, unlike himself. While reminding the fans of an article published by a British rock magazine about Guns N’ Roses’ success, Jon Bon Jovi stated that Axl Rose’s band hasn’t released new material in 13 years, therefore, his place is under the spotlight is all related to his notoriousness.

“That motherf*cker hasn’t made a record in 13 years. Do you know what pisses me off? I was reading this British rock magazine this month and there was a story about Axl Rose and the $13 million Guns N’ Roses record that was never made.

That motherfucker hasn’t made a record in 13 years and he gets all that attention. Do you know what I’ve done in 13 years? A lot. But they have continued to write about the freak show aspect of him. Because he’s a recluse. That makes him interesting, right?”

According to his reputation which is filled with countless verbal feuds with numerous other rockers, Axl Rose was expected to react to Jon Bon Jovi in the most savage way possible, maybe criticising his music or appearance, or personal life.

However, the bad-boy frontman actually decided to ignore the bold statements made by Jon Bon Jovi, and surprisingly, got on with his life as if they were never uttered. While some fans were glad to see the feud wasn’t encouraged by Rose, others were expecting a juicy dispute but never got one.