James Hetfield carries the flag in metal music of being one of the most prominent metal frontmen in the world. His ventures with Metallica brought the band to prominence as a metal act that made those who didn’t listen to metal familiar with the genre. According to many, metal became a mainstream sound thanks to Metallica.

Their legacy is undeniably expansive, and one of the most contributing albums to this legacy was their self-titled record, more commonly known as ‘The Black Album.’ They re-released it in 2021 to celebrate its 3oth anniversary. The band invited many singers from all genres to cover the songs for the new release. Titled ‘The Metallica Blacklist,’ Elton John appeared on a song with Miley Cyrus and brought tears to James Hetfield’s eyes afterward.

Elton John Played ‘Nothing Else Matters’ With Miley Cyrus

Miley Cyrus collaborated with many iconic names to record the cover of ‘Nothing Else Matters’ for ‘The Metallica Blacklist.’ The popstar worked with WATT, Yo-Yo Ma, Robert Trujillo, and Chad Smith. The song came out September 10, 2021, with the entire album filled with covers of the band, reminiscing about their iconic creations.

One of the collaborators of ‘Nothing Else Matters’ was Elton John, and he had commented on the song, the band, and their influence on the music world. He stated so many good things about the band and made James Hetfield shed a tear when he listened to his speech.

What Did Elton John Say That Made James Hetfield Cry? 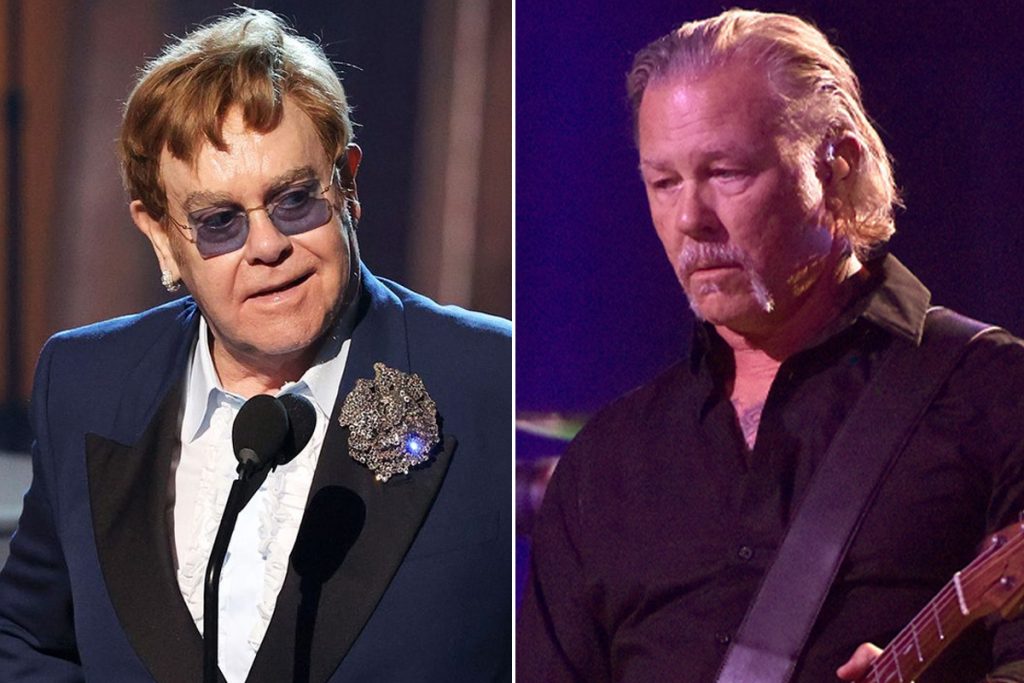 Elton John is one of the most notable names in the music industry. His on and offstage style have grabbed so much attention throughout the years. He has been regarded as a highly influential figure, especially with his piano and composing talents. Hence, every word coming from him carries immense importance.

He stated that Metallica is not just a heavy metal band; they are a musical band and are talented in forming melodic songs. He called their songs beautiful in a heartfelt way that James Hetfield shed a tear during his comments. Lars Ulrich later commented on Elton John’s speech and revealed how Hetfield shed a tear.

“I have to say. It was a no-brainer playing on this song. Metallica are probably the crème de la crème of those kind of bands. You can’t define them. They’re not a heavy metal band. They’re a musical band. Their songs aren’t just heavy metal. They’re beautiful songs. This is such a melodic song. It’s f*cking great.”

“If you could have said 40 years ago when James and I started that 40 years later we would still be functioning, we’d be sitting here with one of the greatest stars in the world next to us, with Elton on a Zoom, doing your radio show, talking about the accomplishments, and what this record means to so many people, that would be the mindf*ck of all mindf*cks.”

He continued about Hetfield:

“To be able to hear what you just said, Elton, sitting next to James. The reaction I can feel in his body language when you said it was one of the greatest songs ever written. It’s just incredible to hear.”

It must be a moment of pride for the band to see many musicians volunteer to cover Metallica’s iconic songs from their 1991 album. Seeing all their hard work paid off after working so hard throughout their career span of 40 years must be a priceless moment for them, so it’s understandable to see Hetfield cry, especially after John’s comments.

You can listen to the cover below.