Machine Gun Kelly recently shared a couple of Instagram Stories to express his thoughts about Kim Kardashian’s SNL sketch named The People’s Kourt, his impersonator Pete Davidson, and jokes about his relationships with Megan Fox.

As you probably know, it was rumored that Machine Gun Kelly and Megan Fox started getting closer when they were on the set of ‘Midnight In The Switchgrass’ in 2020. Then, Fox’s husband, Brian Austin, confirmed that they had ended their relationship in 2019. Kelly and Fox announced their relationship with Instagram posts and intimate moments, which were photographed by paparazzi.

In her SNL hosting debut, Kim Kardashian acted like her sister Kourtney Kardashian for The People’s Kourt sketch, during which she roasted her family and friends. Of course, the sketch also mentioned Kourtney-Travis and Megan Fox-Machine Gun Kelly’s friendship. As Kourtney, Kim said that they are friends because their boyfriends have the same tattoos.

Also, Machine Gun Kelly’s impersonator, Pete Davidson, received very positive reviews for his acting and resemblance to Kelly. Kelly reacted to both Kardashian’s SNL debut and  Davidson’s performance with his recent Instagram Story, saying that he doesn’t talk like that but admitted they look like twins. It seems that Kelly doesn’t have any problem making fun of himself and his relationship with Megan Fox.

“Pete, you know damn well I don’t talk like that.“

You can check out the sketch and IG Stories below. 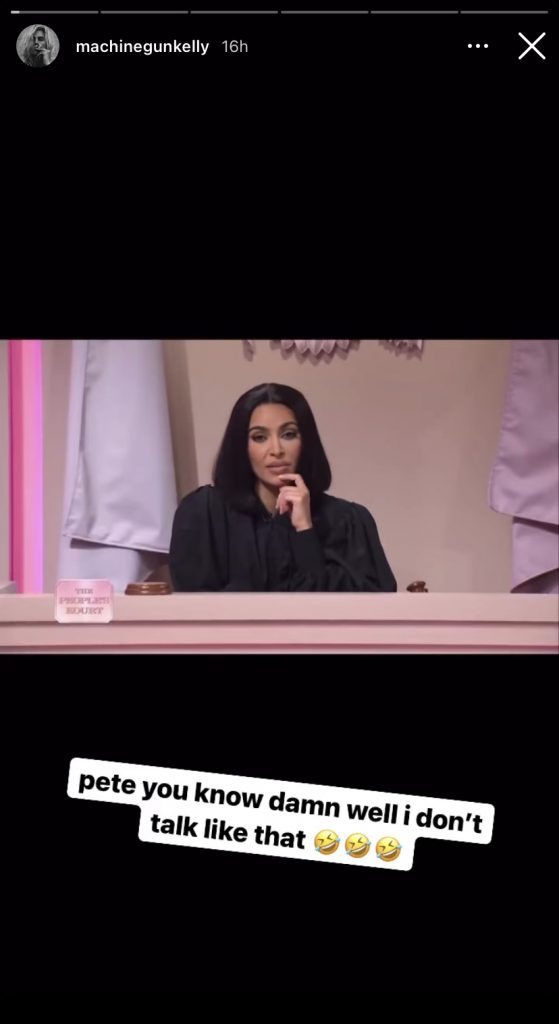