Mötley Crüe drummer Tommy Lee has an exceptional music career that spans over more than four decades including live performances for countless world tours, and gigs at the biggest venues in the world. However, Lee manages to stand out as one of the best entertainers while being the drummer of his band every single time thanks to the showstopper drum stunts that amazed all the crowd.

As many of you know, the craziest stage props and stunts aren’t even the highest limit when it comes to the rock and roll world since these stars have always been willing to surprise their fans as they blew things up on stage, setting themselves on fire, or flying on-air as the audience scream at the top of their lungs while seeing their favorite musician giving their best on stage.

Despite the first thing that comes to the mind may not be drum stunts, there are a few extravagant tricks made by legendary bands throughout history that shocked fans such as the time when Slipknot drummer Joey Jordison used a platform that turned him upside down on stage while he was still playing the drums and there was a time when Blink-182 drummer Travis Barker also defied gravity with his lifting drums. 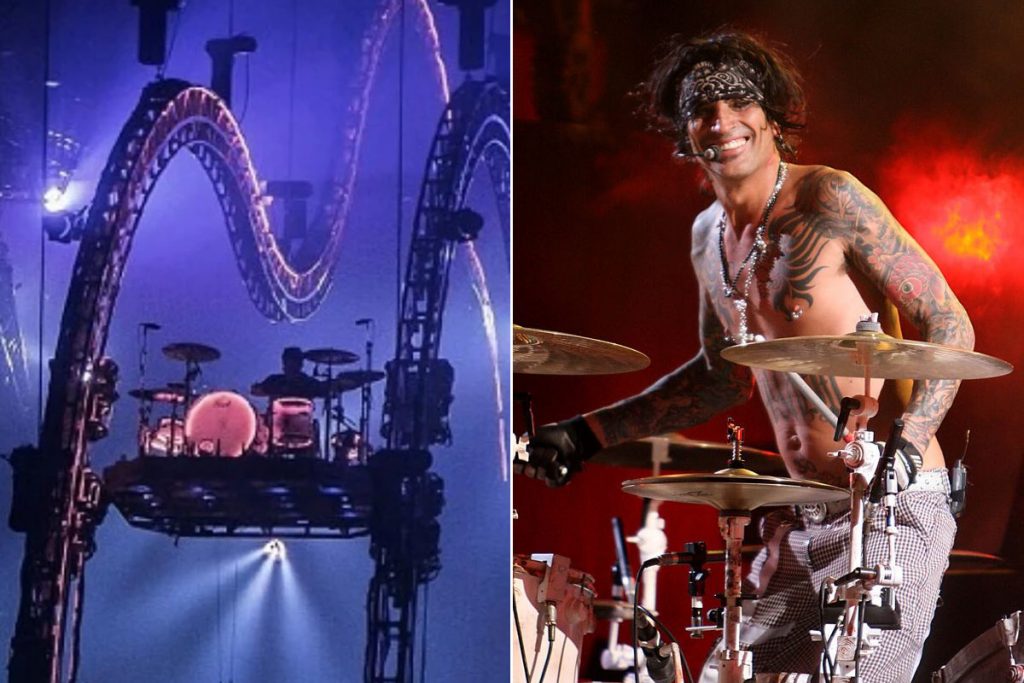 There’s no doubt that if there’s a name who constantly pushed the limits with every show and kept on surprising his fans rather than keeping it a one-time trick, that must be Tommy Lee who kept on improving his signature roller coaster stunt on stage which included an actual rollercoaster while he kept on performing the Mötley Crüe classics.

While fans love seeing him sliding on the rollercoaster, Mötley Crüe drummer also turned this stunt into a circle roller coaster with a matching background that gave the illusion as if he was grabbed and turned in the air. Proving he’s one of the greatest showmen in the music industry, Lee didn’t stop there and he performed while his drum kit was flying in the air only attached to a mechanism that safely floated him on air.

While these magnificent rock poetry in motion went incredibly well mostly every single time without a malfunction and injury, Tommy Lee experienced the worst possible failure during Mötley Crüe’s final show at Los Angeles’ Staples Center when he was suspended upside down halfway through his performance after the whole drum kit rollercoaster malfunctioned. Fortunately, crew members climbed up to the structure and saved Lee so that he could finish playing the show.

Here is what Lee said before being rescued:

You can see the roller coaster stunt by Tommy Lee below.