The Woman Who Chose Keith Richards After Dating With Mick Jagger

Every Rolling Stones fan knows by now that it’s impossible to keep track of all women every band member has been with. However, there are still a handful of remarkable women who left their impact on the band’s music and sometimes even created quite the controversy.

One of these women is Marianne Faithfull, mainly known as lead singer Mick Jagger’s lover. However, she also had sexual affairs with two other members, guitarist Keith Richards and the original leader Brian Jones. Faithfull made the headlines as Jagger’s hard-partying girlfriend when Richards’ house was raided, but she also influenced the band’s music.

Marianne Faithfull And Mick Jagger Had A Romantic Affair Marianne Faithfull was around 18 when she was first introduced to the Rolling Stones members by manager Andrew Loog Oldham who noticed her at a party. At the time, Faithfull was already married to an art dealer, and the couple had a child. Eventually, they divorced, and the young woman started to spend more time with the band members.

After spending so much time together, it was almost inevitable for Faithfull and Mick Jagger to start dating. The couple had a four-year relationship from 1966 to 1970, and the affair gained plenty of attention as expected. There was one time when the couple made the headlines, which later damaged the 19-year-old emotionally.

In 1967, a drug bust at Keith Richards’ Sussex home turned into juicy news for the magazines. Faithfull was found by the cops wearing nothing but a fur rug while Jagger was allegedly enjoying a Mars bar on her private parts.

Nonetheless, the reality was far different from the obscure headlines such as ‘Naked Girl at Stones Party‘ since the candy part of the story was made up. Faithfull admitted that the news destroyed her emotionally since the approach was incredibly sexist when she was portrayed as a slut and a bad mother, whereas Jagger was the glamorous rockstar as always.

The pressure they received from the press wasn’t the only problem in their relationship. According to many, the couple had their ups and downs mainly because Jagger was an unstoppable womanizer. Throughout their relationship, the frontman had an affair with Marsha Hunt, with whom he had his oldest daughter, Karis. In addition, he cheated on Faithfull with her best friend, Anita Pallenberg as well. How did she react to Mick’s unfaithfulness? Let’s take a look. 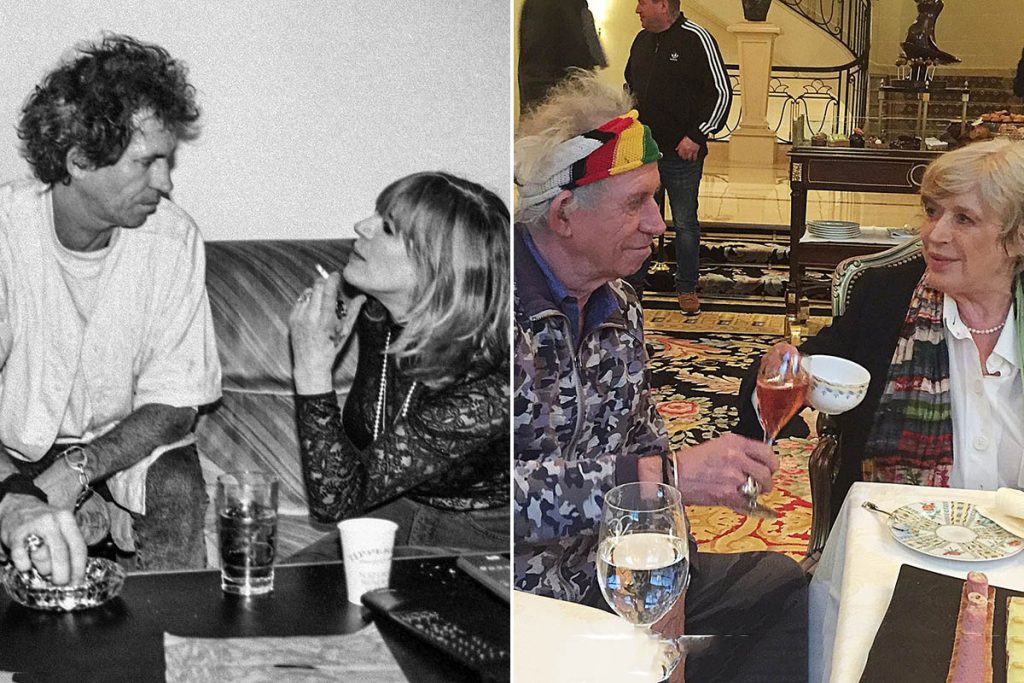 After meeting Marianne Faithfull, Keith Richards and Mick Jagger wrote a song for her, ‘As Tears Go By.’ However, this isn’t the only time the young beauty was a muse to the Stones’ music since, in the following years, she allegedly inspired several classic hits of the band such as ‘Wild Horses,’ ‘I Got The Blues,’ and ‘You Can’t Always Get What You Want.’

The rock scene is no stranger to band members swapping lovers, and rumor has it that the 18-year-old already slept with Keith Richards and Brian Jones before she started dating Mick Jagger. In reality, Marianne Faithfull was furious after discovering that her boyfriend cheated on her with her best friend and sought revenge. The best way to go was to do the same thing to Jagger. Thus, Faithfull had a one-night stand with Keith Richards.

Jagger almost caught them during that night, to which she referred to as the best night of her life. Fortunately for them, the guitarist managed to escape in time, only leaving his socks behind. Since they are now close friends and see each other occasionally, the two often joke about that night, such as Marianne texting Keith that she cannot find his socks.

After a long time struggling with substance abuse, experiencing a miscarriage, and losing custody of her son in those years, Marianne Faithfull later managed to get back on her feet and started working on her music once again. The 74-year-old is still making music and has made a name as a successful musician rather than Jagger’s lover.