Cliff Burton, the legendary bassist, is a prominent musical influence even in today’s world due to his incredible and unique bass-playing techniques. He lent his bass talents to Metallica from 1982 until his tragic death in 1986. Throughout his career with the band, Burton performed on the first three of Metallica albums, named ‘Kill ‘Em All,’ ‘Ride The Lightning,’ and ‘Master Of Puppets.’ Following his death, he also received a posthumous writing credit for the song ‘To Live Is To Die’ featured in the ‘…And Justice For All’ album.

While he was touring with Metallica in 1986 to support the release of their ‘Master Of Puppets’ album, Burton drew playing cards with Kirk Hammett to decide which bunk they would sleep in. On September 26, he won the game with an ace of spades and got Hammett’s bunk. While they were sleeping in the early morning on September 27, the bus skidded off the road and flipped. Due to the lack of safety measures, Burton was thrown out of the window, and he died instantly when the bus fell on top of him.

Although his music career spanned only 12 years, and he died at a young age without having a chance to show off his true potential in bass-playing, Cliff Burton is considered among the most significant bass guitarists in music history. Still a great influence over various musicians and bass players, Burton had a bunch of distinctive bass-playing techniques. In two of Metallica’s songs, his genius way of playing bass is clearly seen. Let’s see which songs they are. 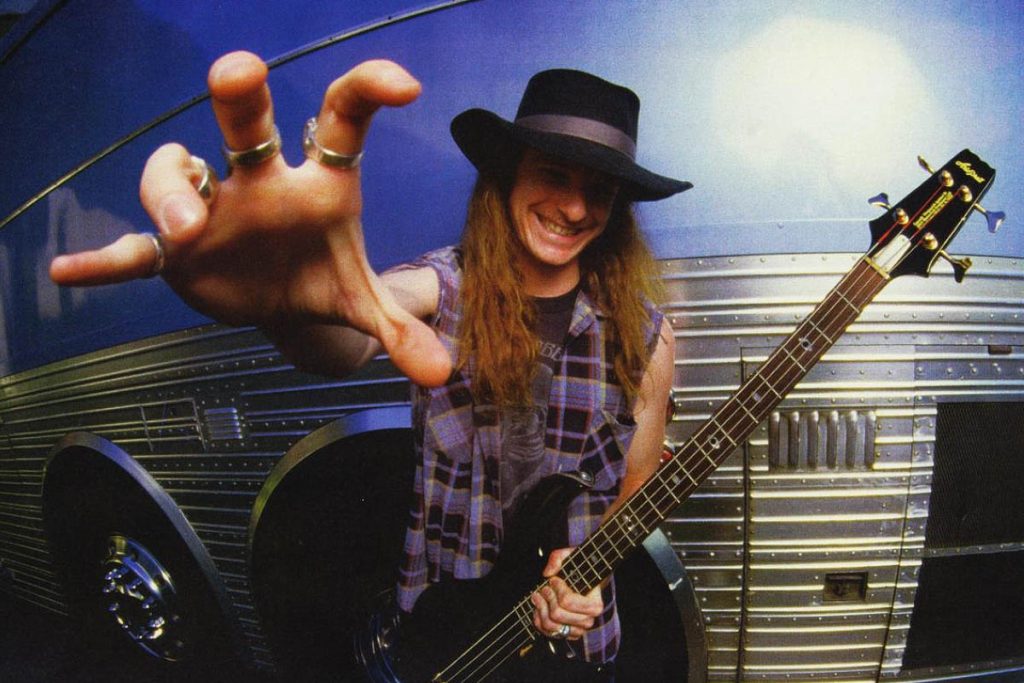 On March 3, 1986, Metallica released their third studio album ‘Master Of Puppets.’ It was the last album Cliff Burton was featured in as the bassist, and he passed away while on its promotion tour. Following the release, ‘Master Of Puppets’ received widespread critical acclaim for its music and lyrics. Moreover, the album is considered among the greatest and most influential thrash metal albums.

Among other songs that appear on the ‘Master Of Puppets’ album, there were two tracks in which Cliff Burton worked his magic in bass-playing with a different technique. In the songs ‘Damage Inc.’ and ‘Orion,’ Burton used volume pedals to enhance the sound he made with his bass. With this technique, the bassist achieved a sound resembling an electric guitar.

In an interview with Harald Oimen, Burton talked about this genius technique. He said that he used lots of harmonies, volume swells, and effects to achieve his sound in the song ‘Damage Inc.’ Following that, the bassist said the little bass solo in ‘Orion’ is right next to a little guitar solo, and he believes no one would be able to tell whether that solo is a bass or an electric guitar solo.

By hiding his talented bass playing in both songs and purposely confusing fans to think that they are listening to an electric guitar solo, Cliff Burton achieved to prove the wide range of sounds a crafted bassist can achieve. Thus, it shouldn’t be surprising that he is still cited as one of the pioneers of the metal bass sound since he evidently always tried to take his instrument one step further.

“On the new album, I heard some short bass solo type thing where you’re using volume pedals. What’s that about?”

“On this album, it’s the intro to a song called ‘Damage[, Inc.],’ done all on bass. It’s about eight or 12 tracks of bass, a lot of harmonies and volume swells and effects and stuff. I would hesitate to call it a bass solo, it’s more just an intro, but it is all bass. There’s also a little bass solo in ‘Orion,’ it’s right next to a little guitar solo. No one will probably be able to tell that it’s bass, but it is.”

You can listen to Metallica’s ‘Orion’ and ‘Damage, Inc.’ below.