Guns N’ Roses, the iconic hard rock band that influenced a whole generation of musicians, was formed in 1985 in Los Angeles California. The band was founded by then Hollywood Rose vocalist Axl Rose and rhythm guitarist Izzy Stradlin, and L.A. Guns founding members guitarist Tracii Guns, drummer Rob Gardner and bassist Ole Beich. However, soon after the band’s formation, Beich was fired and replaced by Duff McKagan, Guns was replaced by a former Hollywood Rose member, Slash, and Gardner was replaced by Steven Adler.

Thus, the official original line-up was ultimately established as vocalist Axl Rose, lead guitarist Slash, bassist Duff McKagan, rhythm guitarist Izzy Stradlin, and drummer Steven Adler. The band signed a record deal with Geffen Records in 1986 and released their debut studio album Appetite for Destruction in the summer of 1987. The album achieved great commercial success and after Guns N’ Roses’s promotion tour, it ranked No. 1 on the Billboard 200 charts. To this day, it is now known as the best-selling debut album of all time.

Guns N’ Roses have released six studio albums and although they have been in the rock scene for over three and a half decades, they are still one of the most well-known bands. However, there have been some changes in the band and the current lineup consists of the original members Rose, Slash, McKagan, and guitarist Richard Fortus, keyboardists Dizzy Reed and Melissa Reese, and drummer Frank Ferrer.

In 2018, the band members had revealed that they started working on a new album which highly excited their devoted fans. Nonetheless, during an interview in 2020 Slash had said that there have been some delays regarding their upcoming album due to ‘the nature of the industry right now.’

In addition to that, Guns N’ Roses had announced that they’re going to start touring after a three-year break, and ‘The Guns N’ Roses 2020 Tour‘ was supposed to start in March. However, only 2 out of the 33 scheduled shows have taken place due to the outbreak of COVID-19. The fact that the band has such a high number of monthly listeners and still fills arenas proves that they have lost nothing from their popularity.

Which Are The Band’s Most Loved Songs To This Day? 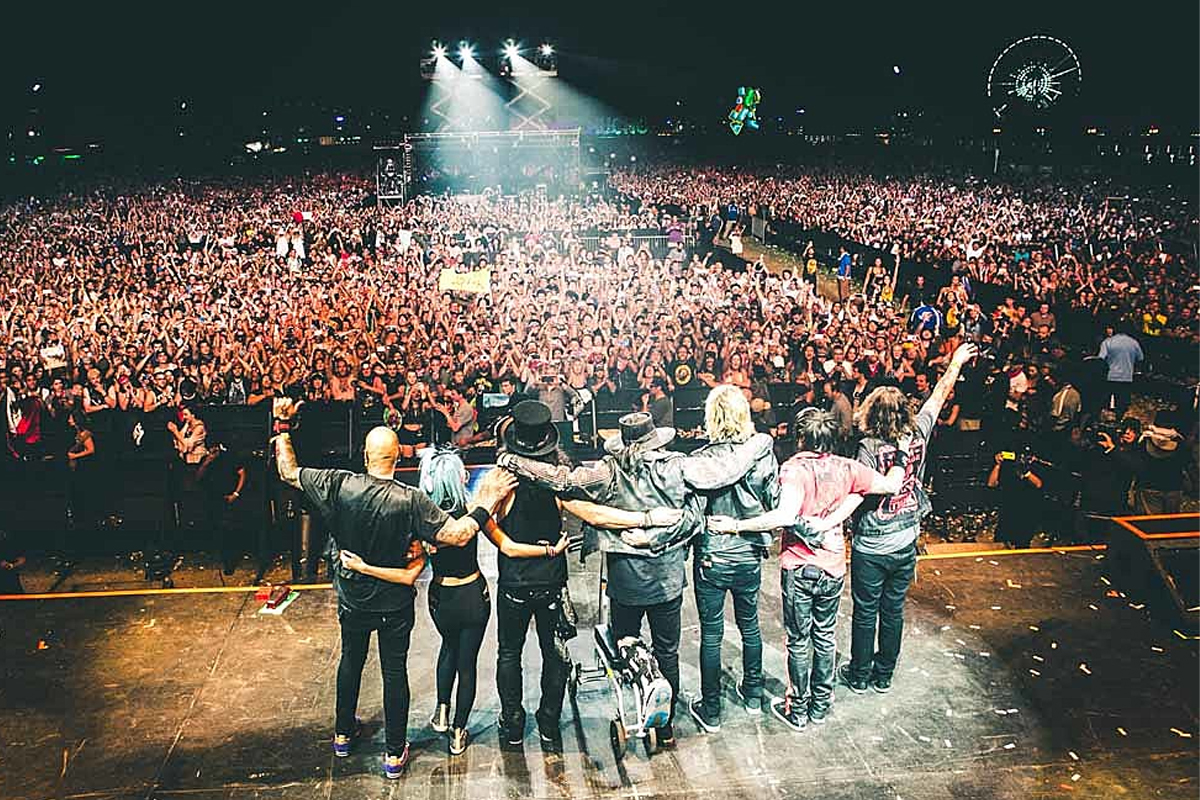 As mentioned above, the band has released six studio albums but there three in specific that have really contributed to the band’s success, fame, and legacy. To begin with, the most famous one is without a doubt GNR’s debut album, Appetite for Destruction which became one of the shining stars of rock history as it came to be known as the best-selling debut album of all time.

When anyone says Guns N’ Roses in a crowd, the first song that often comes to mind is ‘Sweet Child O’ Mine‘ from the band’s debut album which is why it ranks No. 1 on the list with a record number of 936,296,773 streams. The No.2 song on the list is ‘November Rain’ from the band’s third studio album Use Your Illusion I which was released on the same day with their fourth studio album Use Your Illusion II, on September 17, 1991. While the first debuted at No.2 on the Billboard Charts, the second debuted at No.1.

The No. 3 and No.4 songs are ‘Paradise City,’ which perfectly reflects the band members’ approach to life at the beginning of their career, and ‘Welcome to the Jungle‘ were both featured in Guns N’ Roses debut album. As for the No.5 track, it’s Guns N’ Roses’ unforgettable rock over of Bob Dylan’s ‘Knockin’ On Heaven’s Door‘ which they decided to modify before performing.

As you can see below, the top 10 most streamed songs of Guns N’ Roses on Spotify were featured in the three albums mentioned above; Appetite for Destruction, Use Your Illusion I, and Use Your Illusion II, which tells us a lot about the critical reception of these albums. However, the fact that over three decades have passed since the release of these albums but they are still streamed by millions of people proves that Guns N’ Roses was and will be one of the most popular bands all around the world.

It is important to note that Guns N’ Roses are considered to be one of the most influential bands in rock history as in the ’80s rock was still not considered to be a mainstream genre and the fact that they managed to rank so high on the charts reflects their contribution to rock history. Their legacy can also be seen in the modern rock bands they have influenced, such as Mother Love Bone, Avenged Sevenfold, Bullet for My Valentine, Sum 41, Fall Out Boy, and many more.

You can check out Guns N’ Roses’  Top 10 Songs List below.