The Most Talented Lynyrd Skynyrd Member According To Ronnie Van Zant

There are many reasons why Pantera is regarded as one of the most successful and influential bands in heavy metal history. The band’s lead singer Phil Anselmo is one of the greatest frontmen in metal history, praised for his machismo attitude that became the symbol of Pantera’s general theme. The band’s late guitarist Dimebag Darrell is also named one of the greatest guitarists of all time by numerous respectable magazines such as Rolling Stone, Louder, and Gibson.

The two rockers were bandmates for more than two decades until Pantera officially disbanded in 2003. During their time as bandmates, the two had a heated verbal fight after Darrell suggested during an interview that Anselmo’s singing was damaged due to his addiction. The singer didn’t hold himself back and made some pretty bold statements on Darrell, saying he deserves to be severely beaten.

This was long before Dimebag’s tragic passing on December 8, 2004, when he was shot dead while performing on stage. Due to his previous statements, the Pantera frontman was banned from attending his late bandmate’s funeral and he has expressed how much he loved Dimebag Darrel several times during interviews following his passing.

While their friendship was turbulent for sure, there was one thing that brought them together, and that was their music. The two bandmates even had mutual tattoos dedicated to one of their albums, which symbolized their bond. Let’s find out the record they created together and how they got a tattoo to honor their music. 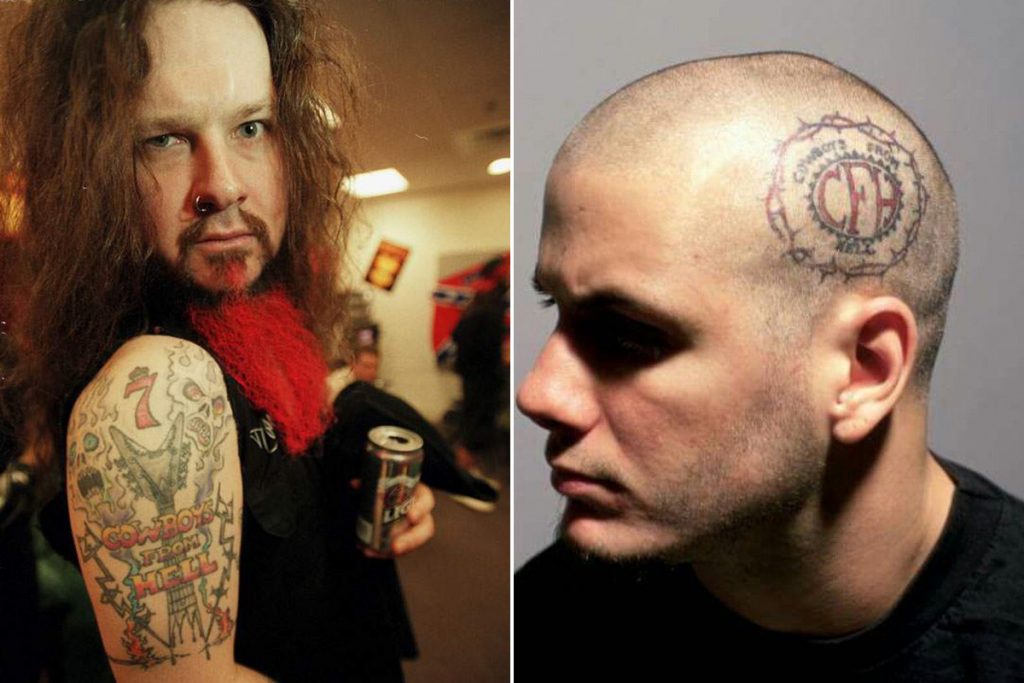 Pantera’s fifth studio album, ‘Cowboys from Hell,’ released in 1990, became the band’s breakthrough record as it entered the charts in 1992, reaching No. 27 on the Billboard Top Heatseekers. Since then, the album has attained both Gold and Platinum certifications in the U.S. and Gold status in the United Kingdom.

In additions, the record has been praised by music critics as one of the most influential albums in the metal scene, especially with its guitar parts. Furthermore, the album ranked No. 11 on the October 2006 issue of Guitar World magazine’s list of the greatest 100 guitar albums of all time and has been praised by many other respectable magazines.

The album that defined groove metal must have meant the world to the band members as it was their greatest achievement at the time. Being the record’s creators, both Dimebag Darrell and Phil Anselmo got tattoos dedicated to their masterpiece. While Darrell has a huge tattoo on his right arm with the album’s name on top of a guitar, Anselmo has a tattoo on his head with the record’s initials.

If this doesn’t scream band spirit, we don’t know what does. Regardless of their unfortunate feud before the successful guitarist’s devastating passing, there’s no doubt that the two musicians had a deep connection over their music, enough to get similar tattoos dedicated to the record that they made together.

Crosby, Stills And Nash Are Back On Spotify After Quitting To Support Neil Young