The Reason Why Kurt Cobain Hated Led Zeppelin And AC/DC

Late Nirvana frontman Kurt Cobain is considered to be one of the most unique and influential musicians in the history of rock thanks to his angst-fueled songwriting and anti-establishment persona that played a major role in creating the one-of-a-kind music of his band. Due to being regarded as one of the greatest lyricists and singers of all time, Cobain’s opinions about other bands always have a place in the rock fans’ minds.

It’s a widely known fact that Kurt Cobain was a huge fan of 1970s hard rock and heavy metal bands including Black Sabbath, Aerosmith, Queen, Led Zeppelin, and AC/DC. Nirvana occasionally performed cover versions of these bands’ tracks and the band even wrote a track ‘Aero Zeppelin’ as a tribute to Led Zeppelin and Aerosmith for their compilation album, ‘Incesticide.’

Despite having admiration and appreciation for both Led Zeppelin and AC/DC, Nirvana’s lead singer wasn’t fond of their choice of lyrics as he revealed once. According to Kurt, both bands had sexist lyrics when it comes to their depiction of sex. Let’s look deeper into Cobain’s statements about two of the greatest bands in rock and roll history. 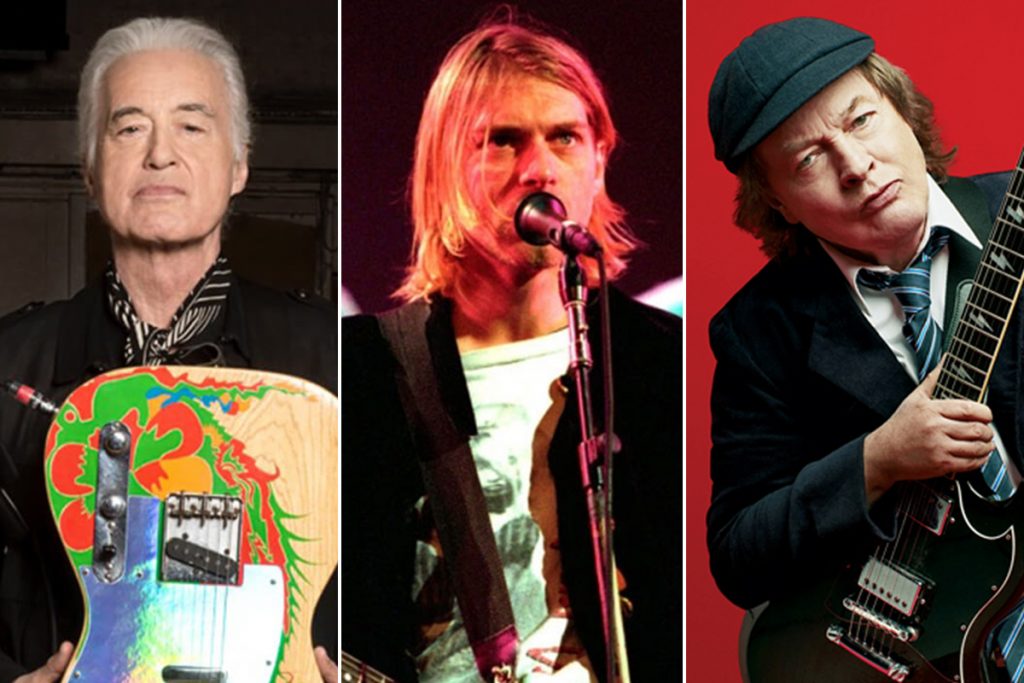 During its music career that spanned over only seven years, Nirvana dealt with social and political topics in the lyrics of their tracks such as the legendary ‘Rape Me‘ which was an anti-rape song, written from the point of view of the victim. The track was a marvelous example of Kurt Cobain’s forward-thinking approach to music. Nirvana singer once opened up about the meaning of the song during an interview with SPIN in 1993 and revealed how he felt compelled to spread awareness on the subject.

“It’s like she’s saying, ‘Rape me, go ahead, rape me, beat me. You’ll never kill me. I’ll survive this and I’m gonna fucking rape you one of these days and you won’t even know it.’”

Being incredibly compelled to stress significant matters through his music, Kurt Cobain once opened up about his favorite bands such as Led Zeppelin and Aerosmith during an interview with Rolling Stone in 1992. Apparently, Nirvana frontman found their lyrics offensive and sexist, especially with songs that were written about having sex.

During an interview with Rolling Stone, Cobain stated:

“Although I listened to Aerosmith and Led Zeppelin, and I really did enjoy some of the melodies they’d written, it took me so many years to realize that a lot of it had to do with sexism. The way that they just wrote about their dicks and having sex. I was just starting to understand what really was pissing me off so much those last couple of years of high school.”

On top of his own words, the author of Cobain based-book Serving The Servant and former Nirvana co-manager Danny Goldberg opened up about Kurt Cobain’s statements during an interview with Forbes in 2019. According to Goldberg, Nirvana’s frontman liked Led Zeppelin and AC/DC’s music, however, it was their lyrics that he felt uncomfortable with.

According to Forbes, Danny Goldberg said:

“First of all, I agreed with him about that. Secondly, I think he was torn: I think he liked the music. He liked Led Zeppelin’s music—and AC/DC. But the lyrics were not something that he felt comfortable with, for exactly the reason that you said. And I think I quote him saying something like that in the book, and I wanted to do it because it’s central to who he was as an artist.

After all, Kurt Cobain was heavily influenced by 1970s hard rock and heavy metal bands such as Led Zeppelin and AC/DC both of which introduced the music the Nirvana lead singer fell in love with in the first place. Although Cobain wasn’t a big fan of their approach to social matters such as gender equality, his fans are thrilled by the fact that it was Nirvana singer who felt obliged to focus on these matters in his own music.

You can listen to ‘Rape Me’ by Nirvana below.