Alice Cooper is a prominent musician who has a career that spans over 50 years. Apart from his music career, he is also a successful actor who has appeared on television shows and films. Born as Vincent Damon Furnier, Alice Cooper adopted his name after the band he co-founded.

The Alice Cooper band rose to fame with their hit single ‘I’m Eighteen’ from their ‘Love It To Death’ album. In 1972, their success continued with their single ‘School’s Out’ from the album of the same name, and their fame kept increasing. However, the band became inactive in 1975, and Alice Cooper pursued a solo career under that name.

Considered the Godfather Of Shock Rock, Alice Cooper met Elvis Presley for the first time back in 1971. However, it was not an ordinary meeting as what happened that day would later become one of the greatest rock and roll stories ever told. According to Alice Cooper, the day he met Elvis, the King asked him to put a gun to his head. Let’s learn the reason why Elvis asked Cooper such an interesting thing.

Elvis Wanted Alice Cooper To Point A Gun At Him 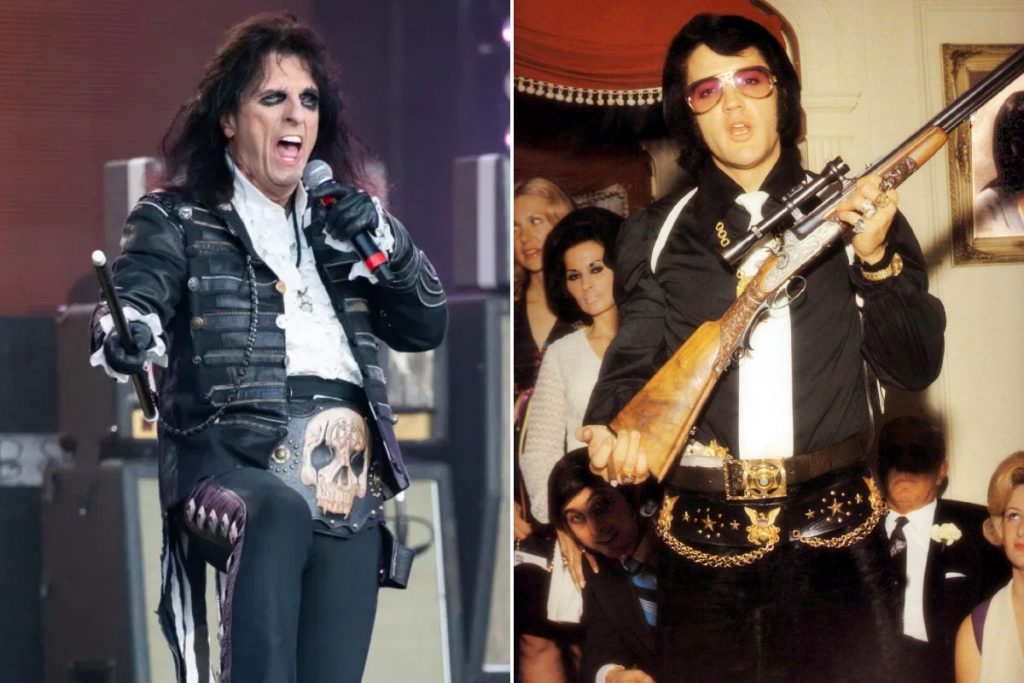 The incident took place in 1971 when Alice Cooper, Liza Minnelli, Chubby Checker, and Linda Lovelace went to visit Elvis at a Las Vegas Hotel. When they arrived at the place, Cooper noticed that the place was full of guns. According to the musician, Elvis took him to the kitchen and opened a drawer. Then, the King pulled out a loaded pistol and asked Cooper to put it to his head.

Cooper then recalled the moment and said he did not know what to do. At that time, he expected a security guard to come in and see him with a gun, shooting him at the instant. The musician also said that a voice in his left ear told him to kill him and become the guy who killed Elvis. There was another voice in his other ear though, which said he cannot kill him because it is Elvis Presley.

As he was listening to his inner voice, Elvis surprisingly kicked the gun, and it went flying. Following that, the King pinned Cooper to the ground and told him this is how you stop a man with a gun.

In an interview by Mirror, Alice Cooper told the story as:

“Elvis took me into the kitchen, opened a drawer, and pulled out a loaded pistol, telling me to put it to his head. I recognized it straight away – a snub .32. I didn’t know what to do, I had this gun in my hand and was expecting one of his security people to come in any second, see me holding a weapon, and shoot me dead.”

A little voice in my left ear was telling me, ‘Go on, this is history, kill him, you’ll always be the guy who killed Elvis’. In my other ear was another voice saying, ‘You can’t kill him, it’s Elvis Presley, wound him instead, you’ll only get a few years!’ A fraction of a second later Elvis did a flying kick on the gun, and sent it flying, before tripping me and pinning me to the ground by my neck, announcing, ‘That’s how you stop a man with a gun.”

Below, you can watch Alice Cooper talking to BBC’s Never Mind The Buzzcocks about the incident.