The endless feuds following a band member’s departure is a tale as old as time, especially when that member is fired right after a verbal fight. There’s nothing worse than seeing two former bandmates who were doing wonders in the studio and on stage coming for each other during interviews. There might be one thing worse, and that’s seeing neither sides reconcile before one side’s death.

That’s exactly what happened when two former bandmembers, ex-Dio guitarist Vivian Campbell and singer Ronnie James Dio didn’t see eye to eye during their time as bandmates. Following Campbell’s departure, their feud turned into a heated verbal fight that grew over the years instead of fading away. Both sides were so passionate that they didn’t consider burying the hatchet even when Dio was diagnosed with stomach cancer in 2009.

Let’s see how this vendetta started in the first place when both musicians were doing wonders musically but dragging each other down personally. It’s best to learn about what happened following the passing of the late Black Sabbath singer to see if Def Leppard guitarist regrets not putting aside his differences with his former bandmate.

Ronnie James Dio And Vivian Campbell Were Bandmates Once 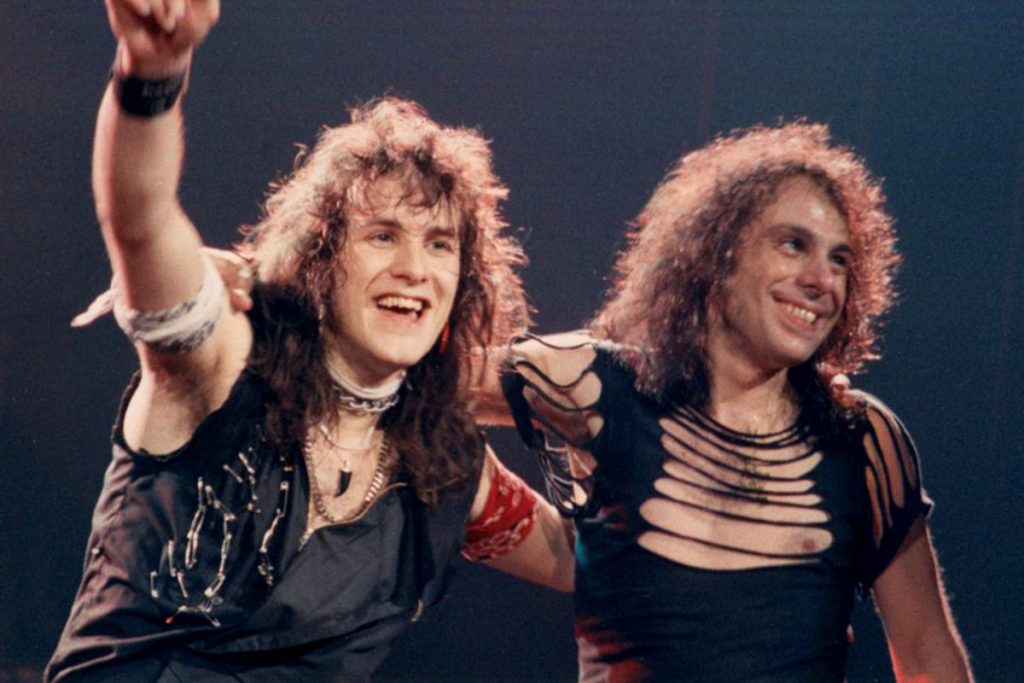 Following his departure from Black Sabbath, Ronnie James Dio and Vinny Appice formed Dio in October 1982. Vivian Campbell joined the band about a month after the formation, replacing Jake E. Lee on guitar. During his tenure with the band, the guitarist appeared on their debut studio album, ‘Holy Driver,’ which was a success that included the band’s biggest hit, ‘Rainbow in the Dark.’

For the next four years, Campbell performed with Dio in numerous concerts such as the 4th Monsters of Rock festival in England, Monsters of Rock in Germany, and promotional tours. The last song Vivian Campbell recorded with Dio was a soundtrack for the ‘Iron Eagle’ named ‘Hide in the Rainbow.’ Since the guitarist was unhappy working with Ronnie James Dio mainly due to personal conflicts and frustration over how much he was getting paid, he was fired in 1986.

Even his departure from the band was problematic since Ronnie claimed that Vivian quit the band during interviews, whereas the guitarist alleged that he was fired. When their personal dislike toward each other combined with clashing statements during interviews, insults were inevitable in the following years. Dio referred to Campbell as a ‘f—ing a–hole’ and called him ‘a piece of s—‘ during interviews.

As a reaction, the guitarist said his former bandmate is one of the vilest people in the music industry, which sounds arguably less aggressive than the singer’s statements. In addition, Vivian accused Ronnie of taking his work with the band away from him when he was fired. All of these happened a few years before the musician’s passing, but what about later? Let’s take a look.

Vivian Campbell Admitted The Feud Was A Mistake

On November 25, 2009, it was announced that Dio was diagnosed with stomach cancer and underwent treatment at the MD Anderson Cancer Center in Houston, Texas. Unfortunately, the legendary musician passed away due to his illness on May 16, 2010.

Vivian Campbell’s statements following his former bandmate’s passing have been both positive and negative at different times. For instance, the guitarist once said that he doesn’t regret having a feud with the deceased musician during an interview with Radio Metal a year after Dio died. According to the musician, the main reason was that they never had a close relationship other than music anyway.

“Even when I was in the band with Ronnie back in the days, we never had a very strong relationship beyond music. That was what brought us together: we were on stage together, recording and writing songs… It was a very strange relationship between him and me. It was a lot of miscommunication, of misunderstanding and I think a lot of it was generational.”

However, during a more recent interview with the Music Mania podcast a few years back, the rocker admitted that he regrets how both sides handled the situation. According to him, they both could have talked their problems through under different circumstances and around different people. Campbell also realized that he made a mistake by not owning up to his heritage with the band due to his anger and hurt feelings, which wasn’t right.

According to iHeart, the guitarist stated:

“I’m sure, knowing Ronnie the way I knew him — I’m sure if we had met each other under the right circumstances, without other people around us, one night, we could have sat down and had a beer and probably made amends, hopefully. We made the mistake of going after each other through the media. It didn’t end well.

I was able to go back to that and realize that despite the hurt that was there from the way they treated me, it was still my heritage. I still created all those songs and those albums with Ronnie and with Jimmy Bain and Vinny Appice. We all gave our heart and soul into that.”

It appears that both musicians didn’t have the biggest problems compared to other rocker feuds, but due to being stubborn about their feelings, they left each other with so much hatred. On the bright side, the former Dio member realized his mistake and now appreciates his time with the band.