Formed in 1973 by Gene Simmons, Paul Stanley, Ace Frehley, and Peter Criss, KISS quickly achieved their sparkling fame in the mid-’70s. The band had become a prominent figure in the mainstream music and media, and they were releasing albums one after another, supporting them with tours. At the time, Van Halen was still trying to find their spot in the rock and roll world and get their big break.

While getting some gigs at LA’s well-known rock clubs like Whisky a Go-Go, Van Halen got a chance when Gene came to hear them. After watching their performance, Gene saw their potential and wanted to give them a helping hand by signing the band into KISS’ record label. However, things didn’t go as smoothly as expected. Gene initiated the band’s signing paperwork but couldn’t keep up with managing them and fulfilling his own rockstar responsibilities.

By now, Gene had gotten to know the Van Halen brothers well, and even though he had to withdraw his attention from them back to KISS, they stayed in contact. Following that, Van Halen managed to sign with a record label and build themselves to become one of the most influential rock bands in the world. In the end, Gene had seen the potential in the band’s performances, and he was correct to try and take them under his wings. Later, they even helped Gene get some songs done and release them with his own band.

Which Songs Did Van Halen Help Gene Simmons With? 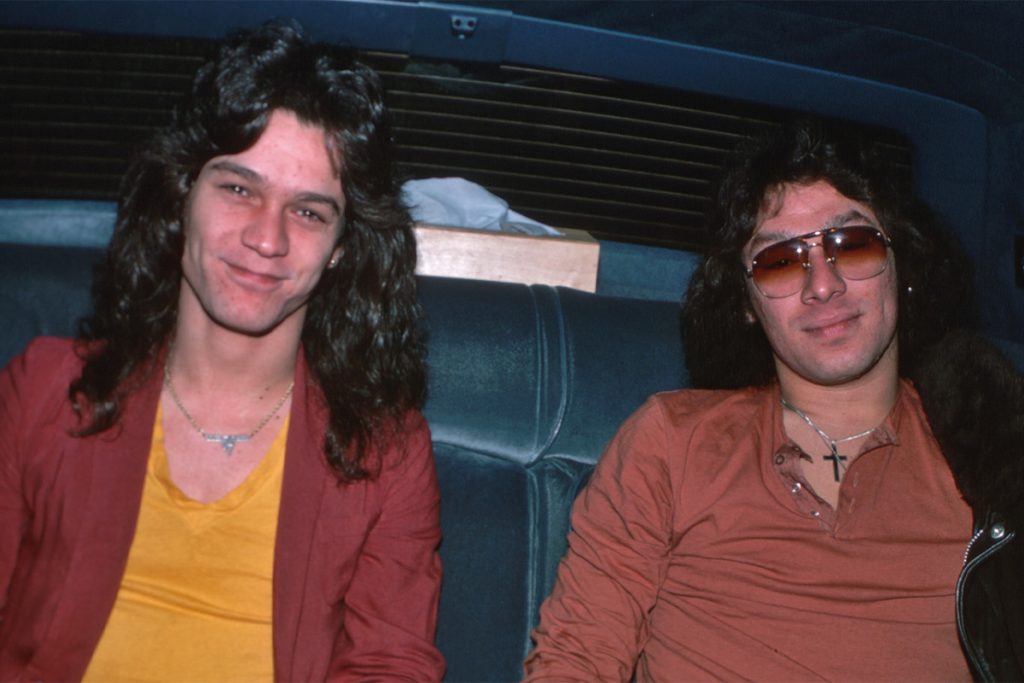 By the end of 1970, KISS had returned from a groundbreaking tour in Japan. Being a professional songwriter, Gene Simmons wanted to demo some new songs as he returned. That’s when he decided it was a good idea to involve the brothers he once loved watching perform. He called Eddie and Alex and asked them for some help in the studio. They jammed, exchanged tunes, and began recording.

In a 2017 interview, Simmons talked about the three songs he created with the Van Halen brothers, ‘Christine Sixteen,’ ‘Got Love For Sale,’ and ‘Tunnel of Love.’ ‘Got Love For Sale’ was released in the 1977 album ‘Love Gun,’ but ‘Tunnel of Love’ was released in Gene’s 1978 solo album ‘Gene Simmons.’ However, ‘Christine Sixteen’ was also featured in KISS’ 1977 album ‘Love Gun,’ and as a single. Eddie and Alex were credited for playing in the demo, but later in the record recording, Gene asked Ace to copy Eddie’s parts to make it their own. The song was a huge hit even though the lyrics were controversial since they are about an old man falling for a 16-year-old girl.

Gene talked about Van Halen’s help in 2017 by stating:

“KISS has come back from Japan from the 78 or 79 tours, and I was busy writing songs. I had a batch of new songs I had written, and usually, I go in by myself or whoever was there and demo them, I tried playing drums and guitar and all that, and we were in Los Angeles, and I called the Van Halen brothers and said, ‘Do me a favor, I’m going into the studio tonight at 1 A.M, do you want to come in and help me put the tracks down?’ And they did. We recorded three tracks’ Christine Sixteen,’ which went on to become a hit single. ‘Got Love For Sale’ and ‘Tunnel of Love.'”

You can watch the full video and listen to the hit song below.