The Andy Summers Song Sting Refused To Play On

One expects all members to cooperate and be team players in a music band. However, sometimes one member does not like the band’s path, so becomes unhappy with their new materials or gets frustrated by the change in their sound. These disputes might end up with one member leaving the band or refusing to play with the rest.

According to the Police guitarist Andy Summers, this was the case with their frontman Sting. In a 2015 interview with the New York Post, the guitarist claimed that Sting is not a team player, and he has a big ego as a result of the attention he gets as the lead. Moreover, Summers also revealed that Sting refused to play one of their songs, written by the guitarist.

Why Did Sting Refuse To Play Andy Summers’ ‘Behind My Camel?’ 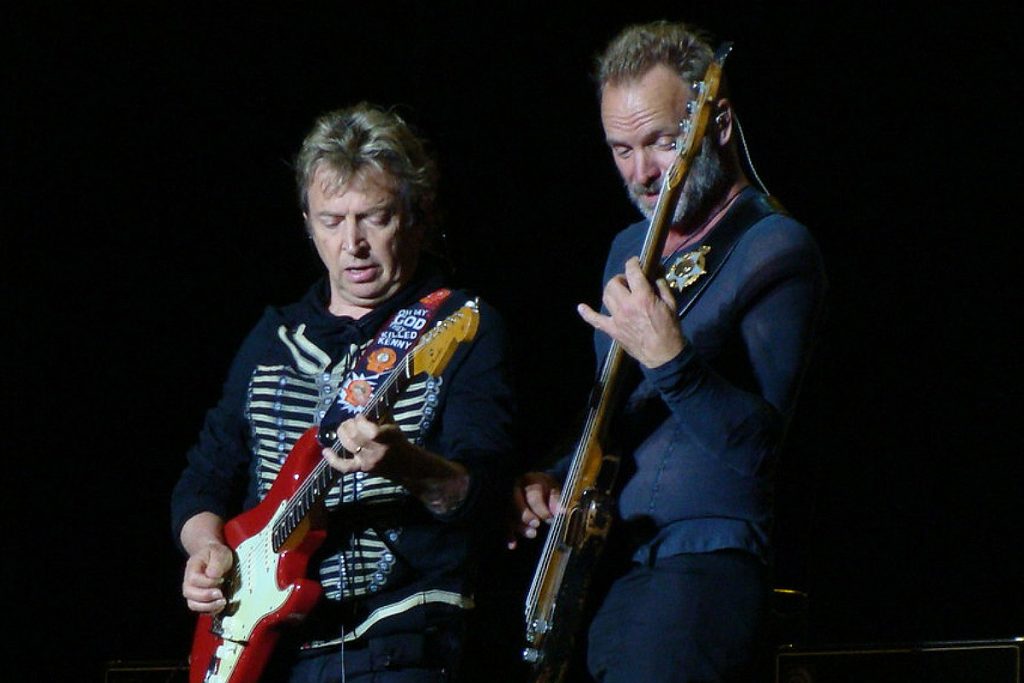 ‘Behind My Camel’ is the eighth song from the Police’s 1980 album ‘Zenyatta Mondatta.’ It was written by the band’s guitarist Andy Summers and was the first song he composed solely throughout his career with the Police. The song won the 1982 Grammy Award for Best Rock Instrumental Performance following its release. At that time, Sting was quite famous as the Police’s frontman, and he tried to act independently within the band.

In a previous interview with the New York Post, Andy Summers talked about his documentary ‘Can’t Stand Losing You: Surviving the Police.’ He stated that Sting was a good-looking person with a great voice, but as soon as he got more attention as the band’s frontman, his ego got big, and he developed control issues.

Here is what Andy Summers told the New York Post about Sting:

“Look, he was a very good-looking guy with a great voice, and he’d strip off onstage. We were dripping with No. 1 records. It’s a classic story; the lead singer starts to get more attention because he’s the guy actually singing, and of course, there’s that ego that goes with it and control issues.”

Sting wasn’t in favor of ‘Behind My Camel,’ and he didn’t even want to play it in the first place. According to Summers, this issue even led to an incident where Sting tried to stop the song from being released as he refused to play on it.

What Did Sting Do To Prevent ‘Behind My Camel’ From Being Released?

As reported by New York Post in the same interview, Andy Summers revealed in the documentary that Sting refused to play ‘Behind My Camel’ when he brought in the song. Summers then recorded it with drummer Stewart Copeland and played bass and guitar himself. Moreover, Sting made a so-called prank at one point during the recordings. He hid the tapes of the song in the studio’s garden.

Sting revealed that he hated ‘Behind My Camel’ so much in a now-inaccessible Revolver interview. He then recalled this incident and said he found the tapes lying on the table one day, took them to the back of the studio, and buried them in the garden.

Here is what Sting told Revolver in the interview:

“I hated that song so much that, one day, when I was in the studio, I found the tape lying on the table. So I took it around the back of the studio and actually buried it in the garden.“

Although Sting hated ‘Behind My Camel’ and tried to stop the band from recording it, Summers searched for them and finished the song after finding the tapes. Furthermore, the song turned out to be a success and brought the Police a Grammy award for Best Rock Instrumental Performance.

You can listen to the Police’s ‘Behind My Camel’ below.