The Time Justin Bieber Covered Fade To Black: What Metallica Thinks About Him?

Metallica, one of the most iconic and influential bands in the music industry, had an impact on numerous musicians from every genre and nearly every musician appreciates their music regardless of their music style even if it’s quite far from rock and roll music such as pop.

Just like others, one of the biggest names in the music industry no matter how many people may have an opinion about him, Justin Bieber is also a huge fan of Metallica as he referred to them as one of his favorite bands of all-time and once stated that his favorite songs of Metallica are ‘Fade to Black,’ and ‘One’ because of the fact that they are both edgy and emotional.

Here is what Bieber said:

“I like Metallica’s ‘Fade To Black’ and ‘One.’ It’s edgy and emotional with those instruments and electric guitars and stuff.”

However, the relationship between the pop icon and rock legend has not been this calm and quiet, especially when both sides have loyal fans with strong opinions due to the fact that a video of Justin Bieber covering ‘Fade to Black’ fueled Metallica fans, thinking he was making fun of the iconic band, however, things turned out the other way as both sides opened up about each other. It is not a surprising incident when Bieber finds himself in the middle of a controversial situation since his teenage years had plenty of events such as using the n-word, hitting the paparazzi with his car, and spitting on his fans, however, there was one time when he touched a nerve on Metallica fans with a backstage video.

Way back in 2014, when worldwide famous singer Justin Bieber was just 20 years old, there was a video online that shook Metallica fans as the pop singer was covering the legendary song, ‘Fade to Black’ with his guitarist backstage while he was touring, however, rock fans were offended by Bieber’s attitude in the video since he’s performing the guitar in the song with his mouth which was disrespectful, according to Metallica fans.

After the leaked video, Metallica and rock fans overall were furious as they thought somebody like Justin Bieber who is a mainstream, young pop singer should not even be speaking about a band such as Metallica that is one of the greatest bands of all-time, let alone ‘making fun’ of one of the band’s most monumental songs.

You can see the video of Justin Bieber covering ‘Fade to Black’ below. 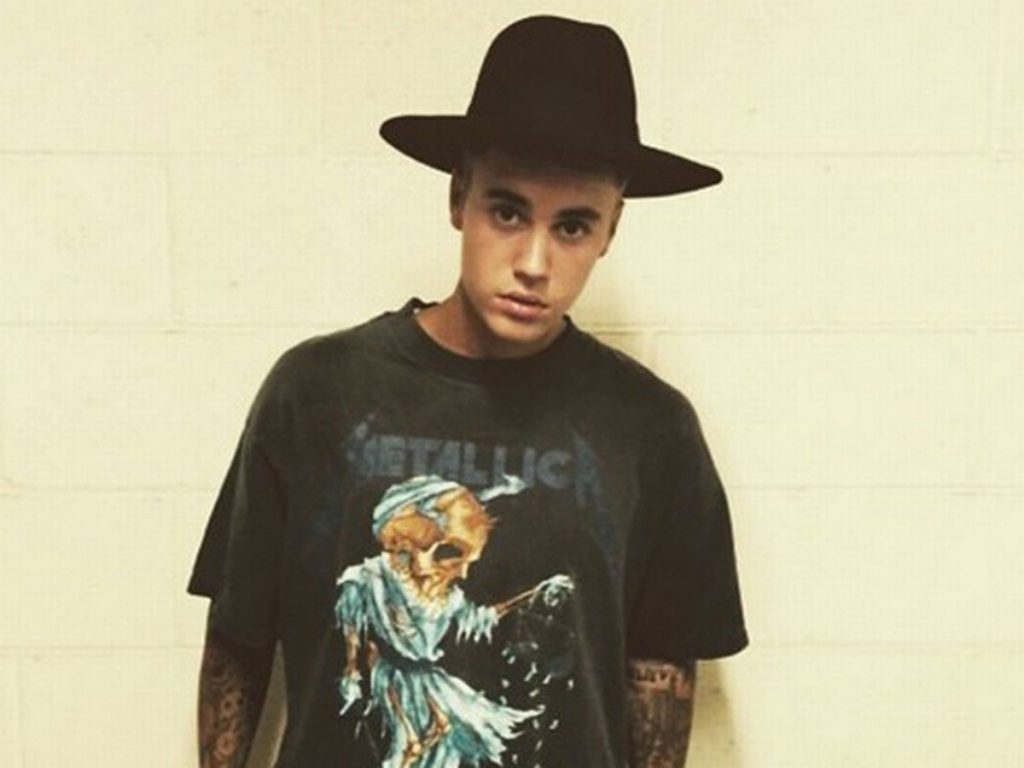 It was quite clear that Justin Bieber was a fan of Metallica quite genuinely as he started to appear wearing the band’s t-shirts on multiple occasions, and still to this day, Bieber chooses to wear Metallica t-shirts even as a touring outfit on stage. While the time has passed and everybody is quite fine with a JB in a Metallica shirt, it wasn’t always like this at the beginning.

When Justin Bieber shared a picture wearing a Metallica t-shirt for the first time, it rubbed the band’s fans in the wrong way as it’s, once again, not ‘his right’ to cherish and love a band like Metallica. While a t-shirt made the news, heavy metal fans took the deal quite seriously and JB was slammed at the time.

However, Bieber continued to keep rocking those amazing Metallica t-shirts over and over again and multiple websites even started to refer to the t-shirts he was wearing as ‘Justin Bieber Metallica t-shirt.’ While some fans were not happy with him wearing those, there were also numerous people who are quite happy seeing a star appreciating another musician’s art.

Metallica Reacted To JB And They Are ‘Beliebers’

While both side’s fans were arguing over who’s right and if Justin Bieber has been disrespecting Metallica, the fight heated up even more over time. However, fans were also curious to know what the legendary band was thinking about JB as their reaction could put an end to the conversation.

Metallica members eventually opened up about the matter during an interview with Q Magazine back in 2013 and they all surprisingly revealed that they are ‘beliebers,’ meaning that they all are a fan of Justin Bieber. Drummer Lars Ulrich showed his support for the young musician at the time and stated that he’s going through so much at a young age and he’s also a super talented musician.

“Are we Beliebers? Yes.”

Here is what Ulrich said:

“Is it possible to have respect for him without being a Belieber? I think the kid’s really talented and obviously to go through what he’s going through at that early age must be a mindfuck. So the fact that he still goes out there and does it, I admire that and I think he’s super talented, so I guess I am kind of a Belieber. If he likes ‘One,’ and Liam Gallagher likes him, OK, there you go.”

“As long as he stays out of trouble, I’ll be a Belieber.”

And there’s that, Metallica is a fan of a talented musician who may be going through tough times due to the fact that he’s in the spotlight at a young age which all members can relate and understand, while Justin Bieber, despite being a pop musician, appreciates and loves one of the legendary bands of all time.