Imagine Dragons lead singer Dan Reynolds isn’t a musician who is known for having violent physical fights with others. Instead, he’s often known for being an easy-going person who conveys encouraging messages of support when it comes to mental health and the LGBTQ+ community.

When Reynolds is the case, it’s almost unbelievable to think of him as a person who would enjoy being punched by somebody else. However, he proved himself to be otherwise during the shooting of their music video of ‘Believer,’ and it might have something to do with going up against the legendary actor Dolph Lundgren.

As many of you know, Imagine Dragons released the song ‘Believer‘ on February 1, 2017, as the lead single from their third studio album ‘Evolve.’ After the release, the song peaked at number four on the US Billboard Hot 100 as well as reaching top ten in numerous countries. It was an incredible success as the song didn’t only become the fifth best-selling song of 2017 in the United States, it also became one of the best-selling singles of all time.

The official music video for the song which was released on March 7, 2017, was as equally successful as the track itself. The video features a boxing match between lead singer Dan Reynolds and famous actor Dolph Lundgren who portrays an older version of the singer. There’s also a young Dan who is drawing on his notepad throughout the video.

As the frontman revealed during an interview, the song represents self struggle which is why the music video portrays three generations of the frontman within his conscious. In order to portray the fight within one’s self, they decided to show a boxing match that had no winners as the video ends with Reynolds barely conscious.

In his own words, Reynolds said:

“It’s a song of self struggle and feeling like you beat yourself up a lot but it also has brought you to your greatest successes in life. So it was like, ‘Okay, maybe it’s gonna be an older version of myself.’ It’s kind of beating the younger version of himself up with that wrestle that happens within this conscious. This record has a lot of 1980s themes and we always liked that cold kind of stuff.”

The success of the music video for ‘Believer’ is undeniable as it has over 2 billion views and over 17 million likes currently on the band’s official YouTube channel. It is also the most-viewed and most-liked video of Imagine Dragons, and the 21st most-liked video on YouTube as well. 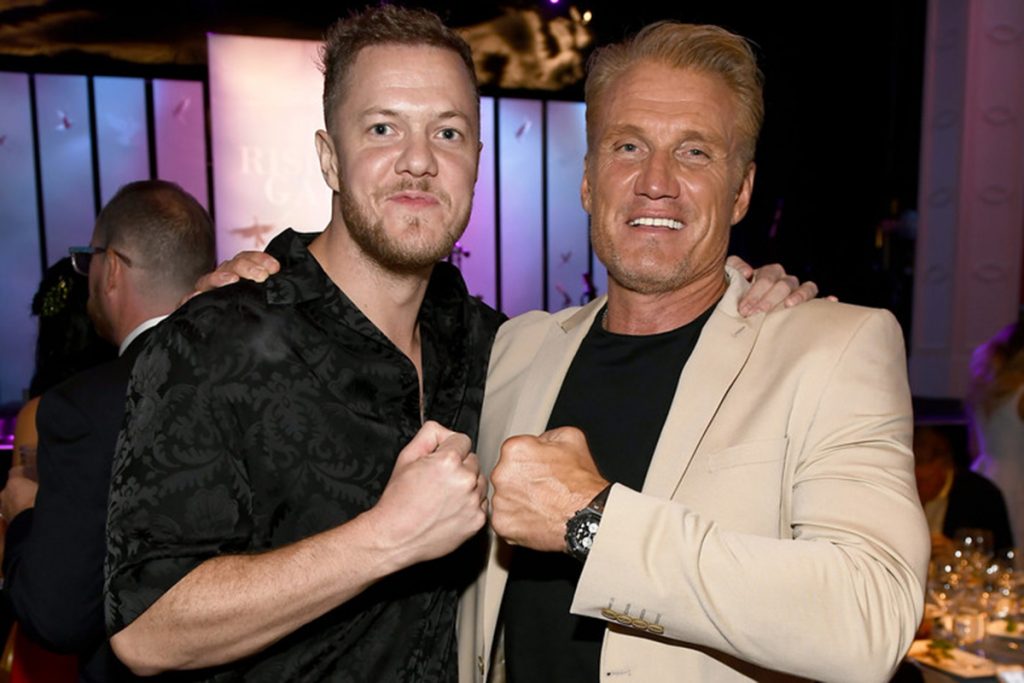 It appears that all the hard work paid off considering the massive success both the single and the video received. However, how much Dan Reynolds was willing to participate in a boxing match may surprise you. Although many would consider the boxing match between him and the ‘Rocky’ legend to be based on technology, the singer revealed the punches weren’t entirely fake.

During a 2017 interview with Entertainment Tonight, the Imagine Dragons vocalist was asked if the fighting scenes were dangerous. Apparently, Dan Reynolds didn’t want the scenes to be fake-looking, therefore he was punched nearly 20 times in the face and head by Dolph Lundgren, especially during shadowboxing.

Reynolds also didn’t forget to mention that those times he was punched were his fault as he leaned forward when he wasn’t supposed to, causing the strong punches to meet his face. Fortunately, the singer wasn’t bruised the day after the shooting but humorously stated that his brain was damaged in the making.

He also praised Lundgren for being such a professional actor and going easy on him. Furthermore, Reynolds revealed that he didn’t feel bad about being beaten up by such a legendary martial artist. He even went on to say that he thinks everybody would want to be punched in the face by Dolph Lundgren.

Regarding boxing scenes, the singer stated:

“I genuinely was punched in the face and in the head. How many times? Probably 20 times. He was cool and he’s professional but I didn’t want it to be false. Then there was one time actually when we were shadowboxing and got close beat on a bunch, and he caught me in the jaw.

It was my fault actually because I moved in and wasn’t supposed to. I felt like my knees definitely buckled and then, I was like, ‘Okay, this is what it feels like to be actually caught in the jaw.‘ I would say the next day my brain definitely shook. I wasn’t bruised up but my brain was bruised.

I think everybody wants to be able to say they were punched by Dolph Lundgren. So I wasn’t mad, I was like, ‘Thank you for punching me in the face Dolph.’ He took it easy on me, he’s the real deal, he’s brutal and super cool.”

You can watch the interview and the music video below.