Two iconic former lead vocalists of Van Halen, both to be known for their iconic era with the band as David Lee Roth initially was with Van Halen and was a part of their breakthrough and Sammy Hagar had big shoes to fill in when he stepped in and created a whole other band with his vocals and one-of-a-kind presence on stage and both singers are admired by fans.

However, the two frontmen don’t seem like enjoy each others’ company mostly because of the rivalry and the competition between them, somebody thought it would be a great idea to bring them together on stage to present an award nearly two decades ago and the footage is still incredibly cringy to watch.

As many of you know, the legendary band Van Halen is one of the best-selling artists in the United States, often regarded as one of the greatest bands of all time with their timeless chart hits, monumental studio albums, and record-breaking live performances. Therefore, it was inevitable for the two precious lead singers of the band both of which have proven to be the best, to have a sweet competition between them as even the fans are quite strict about their choice of the best era of the band.

There’s no doubt that both David Lee Roth and Sammy Hagar are two of the greatest lead singers in the world and widely known for their successful tenure with Van Halen which lasted for years as they parted their ways with the band and then reunited again multiple times. To understand their music career with the band, let’s take a look into their timeline with Van Halen. 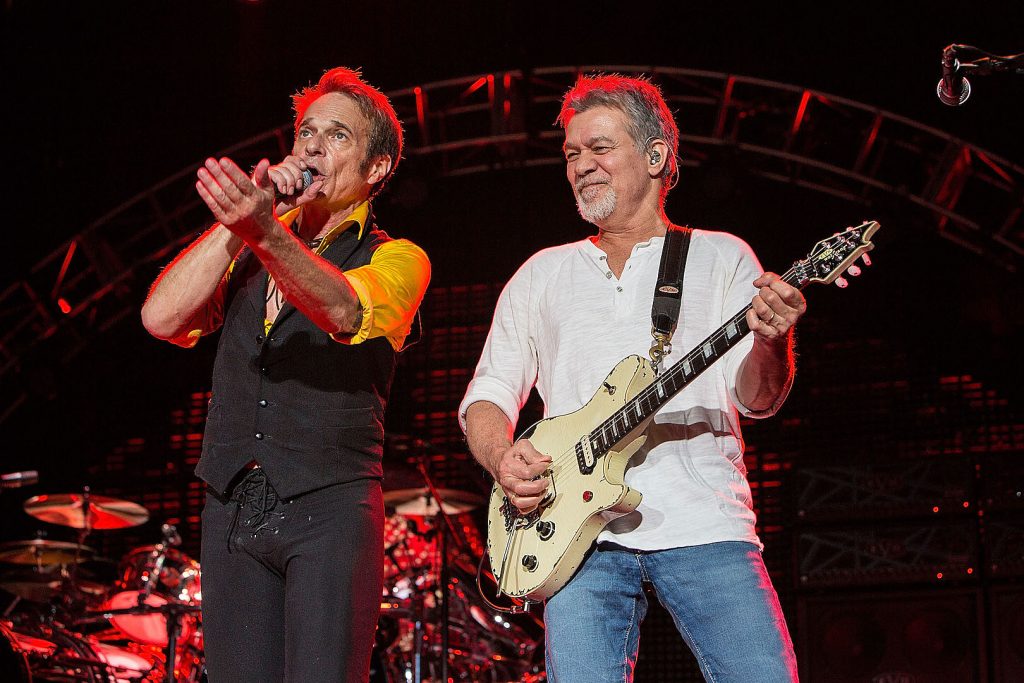 As many of you know already, David Lee Roth was the lead singer of Van Halen for three different time periods, first starting from 1974 to 1985 during which he proved himself as the wild, energetic, and eccentric lead vocalist the whole world recognized as well as creating a few best records of the band such as the self-titled debut studio album, 1981 album, ‘Fair Warning,’ and last but not least, ‘1984.’

The inevitable ending happened when creative differences surfaced and David Lee Roth parted his ways with Van Halen in August 1985. Fortunately, the legendary singer reunited with the band in 1996 and later again in 2006 initially for a North American tour which became the highest-grossing in the band’s history and one of the highest-grossing of that year and remained the band’s lead vocalist until Van Halen’s disbandment in 2021.

When David Lee Roth first parted ways with Van Halen, the band members had numerous options to fill his place and when auditioned Sammy Hagar, they quickly hired him as the band’s new lead vocalist. Despite the fact that The Red Rocker had a big responsibility for the band’s fans, he created a whole different sound with Van Halen thanks to his own style of singing and stage presence.

Sammy Hagar undoubtedly became a legendary frontman as Van Halen released four multi-platinum, number one Billboard charting albums, ‘5150,’ ‘OU812,’ ‘For Unlawful Carnal Knowledge,’ and ‘Balance,’ with Hagar as their singer in addition to countless chart hits. The Red Rocker’s tenure with Van Halen was so unique and different than before that the band was often informally referred to as ‘Van Hagar’ both by fans and media.

Unfortunately, Hagar’s departure from the band in 1996 had the same reason as David Lee Roth as he couldn’t agree with other band members about a greatest hits album as well as his personal issues. Despite reuniting with Van Halen from 2003 to 2005 including a tour, Sammy Hagar has been widely known from the time when he first replaced Roth and presented his own voice.

The Tension Between David Lee Roth and Sammy Hagar On Stage

The majority of Van Halen fans have their favorite frontman out of these two brilliant musicians which causes an obvious rivalry and competition between David Lee Roth and Sammy Hagar, whoever decides the presenters in the MTV Video Music Awards back in 2002 thought seeing these two iconic Van Halen singers together on stage as they’re presenting the Best Rock Video award would be a majestic moment to watch.

Despite the idea behind seeing two legendary frontmen sharing a moment together on stage is amazing, both David Lee Roth and Sammy Hagar seemed incredibly uncomfortable during the whole presentation as they were sarcastically roasting each other while supposedly making jokes with nothing but cricket sounds from the crowd.

While it was extremely ‘cringeworthy’ to watch for the audience as they were looking confused while listening to the two former Van Halen frontmen’s conversation on stage, it looked as painful for them as it was for the audience since they got it over with once they presented the award, which was received by Linkin Park, and the uncomfortable moment went down the rock and roll history.

You can watch the moment when David Lee Roth and Sammy Hagar shared the same stage below.