Foo Fighters and Red Hot Chili Peppers are two of the greatest rock bands in music history and lucky for their fans, all of the band members have a longtime friendship. From touring together to working on a number of projects outside of their bands, such as drummers Chad Smith and Taylor Hawkins performing on Ozzy Osbourne’s next studio album, both bands’ members proved that they have a close relationship.

As many of you know, pranks are a staple of rock and roll music as the bands oftentimes pull pranks on each other, especially while touring together if they are getting along just like RHCP and Foo Fighters. While there must be countless iconic moments in rock and roll history when it comes to pranking a fellow musician, the prize for pulling an entertaining prank goes to Foo Fighters’ frontman Dave Grohl and Taylor Hawkins as the two poured hundreds of ping pong balls as well as spaghetti on to Chad Smith. Let’s dive into this hilarious story of how the prank war between close friends started and see who became the winner.

It Was Chad Smith Who Started The Prank War 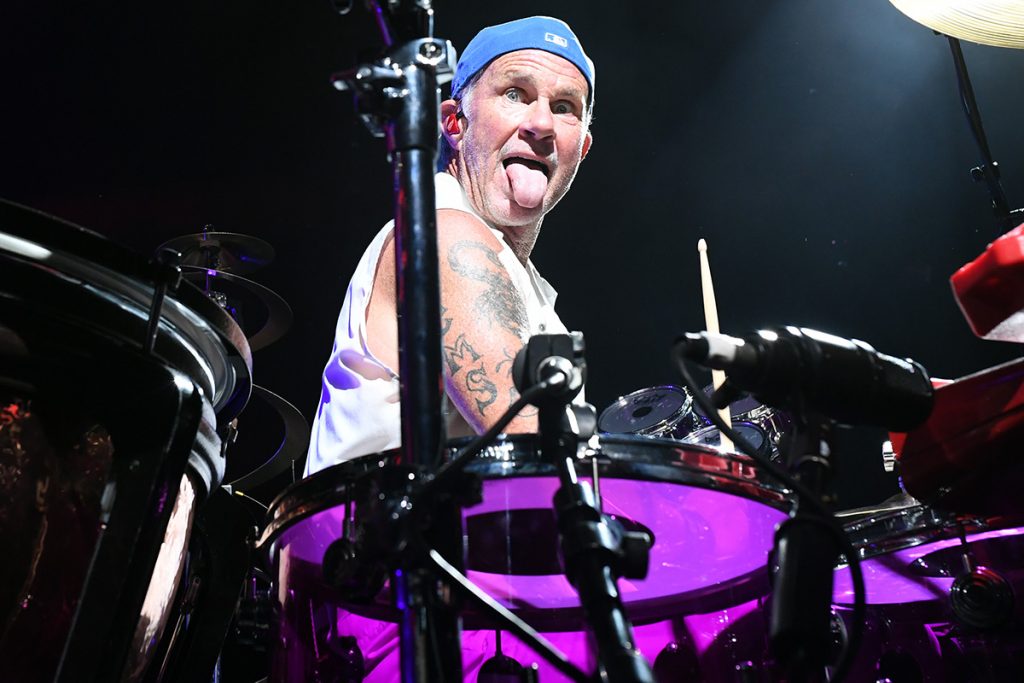 The prank war between Red Hot Chili Peppers’ Chad Smith and Foo Fighters’ Taylor Hawkins and Dave Grohl started when both bands were extensively touring the United States together in 1999. It was Smith who came up with an idea to prank Hawkins as he’s the drummer and cannot move much on stage.

During an interview with Rolling Stone on November 22, 2017, the Red Hot Chili Peppers drummer opened up about the first time he pulled a prank on Foo Fighters. According to Smith, the friendly rivalry began when he poured a lot of M&M’s and popcorn on Taylor Hawkins while the band was performing so that he couldn’t escape.

According to his statement, Smith revealed:

“As you know, the drummer doesn’t move around, he has to sit in one spot…so I decided it would be a good idea to rig up things above Hawkins. M&M’s, popcorn…not like a few, not a bag, a lot. Thousands at the end of one of their songs, it would all come down on him and he couldn’t get out of the way. I thought that was funny.”

Despite finding his prank funny, Chad Smith experienced whole a lot worse when Foo Fighters members decided to take their revenge on the Red Hot Chili Peppers drummer. As expected, Dave Grohl and Taylor Hawkins leveled the prank war up with a stinking and rather disgusting ingredient to their prank that ended with an angry and dirty drummer.

In order to make the drummer pay for what he has done, Foo Fighters’ Taylor Hawkins and Dave Grohl decided to pour ping pong balls and spaghetti on Chad Smith during the last show. As revealed during an interview with Radio X’s Gordon Smart in 2019 by Taylor Hawkins, it was the worst show of his life but definitely the most hilarious one.

In his own words, Hawkins’ statement follows:

“We were opening up for the Chilli Peppers. This is back in the ’90s, late 90s, maybe 2000. And we decided since it was the last show, first of all, we dropped a thousand golf balls on their heads, and then pasta like all over the band.”

During the same interview he admitted to starting the prank war, Chad Smith also revealed how he felt about being pranked by Foo Fighters’ members. Apparently, the whole incident started quite awkwardly as the glitter and ping pong balls felt disturbing. While feeling okay after the balls stopped pouring, Smith was caught off guard while pounds of spaghetti were raining on him. Being the good friend he is, the drummer reacted by only tackling Dave Grohl backstage after finishing the song covered in pasta.

During the interview with Rolling Stone, Smith stated:

I was like, ‘Okay, cool.’ Then like 500 pounds of spaghetti! That was like snakes falling on you for a long time. It did not stop, it was all over the drums. They got me really good. I barely finished the end of the song, then I run off and tackle Dave.”

It’s fair to say it was Foo Fighters who won the prank war after all since they managed to trick Chad Smith into thinking they weren’t going to prank him at all. Then, there comes the ping pong balls and lots of spaghetti. Props to the RHCP drummer for not only keep performing the song and rocking it while being washed with tons of pasta which is a hilarious moment to watch every single time.

You can watch the prank on Chad Smith and his interview as well as Taylor Hawkins’ below.