It’s been widely known that there is often rivalry between the bands which achieve great fame and popularity around the same time. However, the press enjoys turning these small rivalries into longtime feuds by asking triggering questions to the band members and using clickbait headlines. Nirvana and Pearl Jam also became the subjects of these headlines aiming to draw the attention of their dedicated fanbase.

Nirvana became one of the most prominent figures of the Seattle grunge scene following its formation in 1987 by Kurt Cobain and Krist Novoselic. Three years later, their biggest competitor Pearl Jam was formed, and its rising popularity and mainstream success caused a longtime rivalry and feud between two legendary bands of Seatle scene. The feud was fired up by Kurt Cobain’s harsh criticism of Pearl Jam.

How Did The Feud Between Nirvana And Pearl Jam Start? 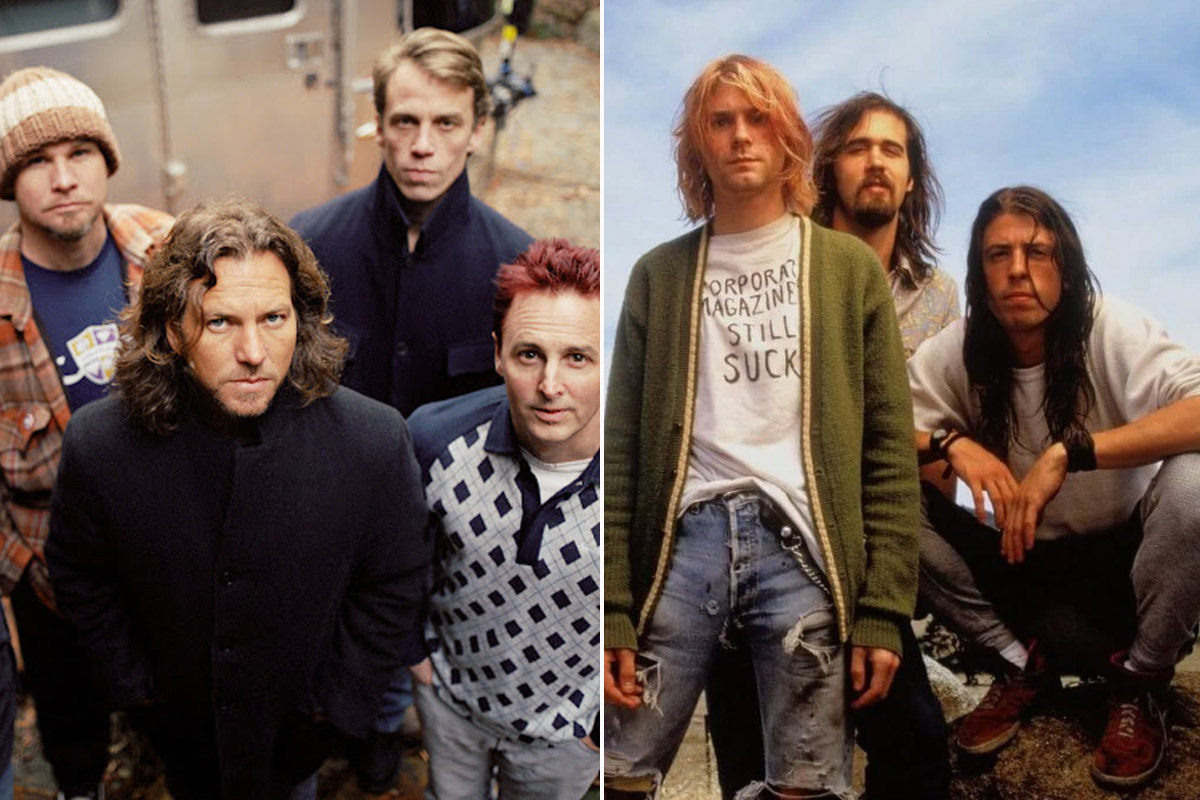 Nirvana released their second studio album entitled ‘Nevermind’ in 1991 which was the same year when Pearl Jam released their debut studio album ‘Ten.’ Both of the albums gained great popularity and commercial success by hitting the charts and breaking the sale records of that time.

Nirvana’s frontman Kurt Kobain, who was not a great fan of mainstream media and the music industry due to its corporate aspect, hated being put into the same category as Pearl Jam because he thought that they were a ‘corporate alternative and cock-rock fusion’ while this was not at all what Nirvana was trying to do.

“There never was one. I slagged them off because I didn’t like their band. I hadn’t met Eddie at the time. It was my fault; I should have been slagging off the record company instead of them. They were marketed. Not probably against their will but without them realizing they were being pushed into the grunge bandwagon.”

In Vedder’s words, he stated:

“I probably could have agreed with some of the things he said but we had a little bit of a difficult relationship with that reality… and that made us a little vulnerable.”

Thus, Cobain defined Pearl Jam as a corporate rock band but he later realized that it was wrong to judge them because of the strategies initiated by their record company that pushed the band to the Seatle scene. Also, he stated that he didn’t like the style of Pearl Jam. Decades later, the band’s frontman Eddie Vedder stated that he agreed with some of Cobain’s words about Pearl Jam but also admitted that he couldn’t understand what Kurt meant back then as they were going through some tough times.

Consequently, the feud between Pearl Jam and Nirvana became more of a misunderstanding and ended after Kurt Cobain explained the reason behind his harsh criticism and revealed that he should have targetted the record company instead of the band itself. Also, Eddie Vedder highlighted that Cobain was right about some things and he had the right to criticize the style of the band.