Commonly, rock stars have signature moves that became an essential part of their music and entertainment industry careers. For instance, Axl Rose’s snake dance, Jimi Hendrix’s playing guitar with his teeth, Iggy Pop’s stage dive, and Angus Young’s duck walk can be considered notable and most famous ones by the fans. However, sometimes these characteristics could result in feuds or controversies between the musicians.

One of the best-known disputes was the devil horns controversy between Black Sabbath’s Ronnie James Dio and KISS’ Gene Simmons. The hand gesture is heavy metal music’s prominent and unique feature with different cultural meanings worldwide. Many people claimed that Dio first popularized it, which became his signature move during his times as a Black Sabbath member, but the bassist had another idea about that.

What Did Ronnie James Dio Say About Gene Simmons? 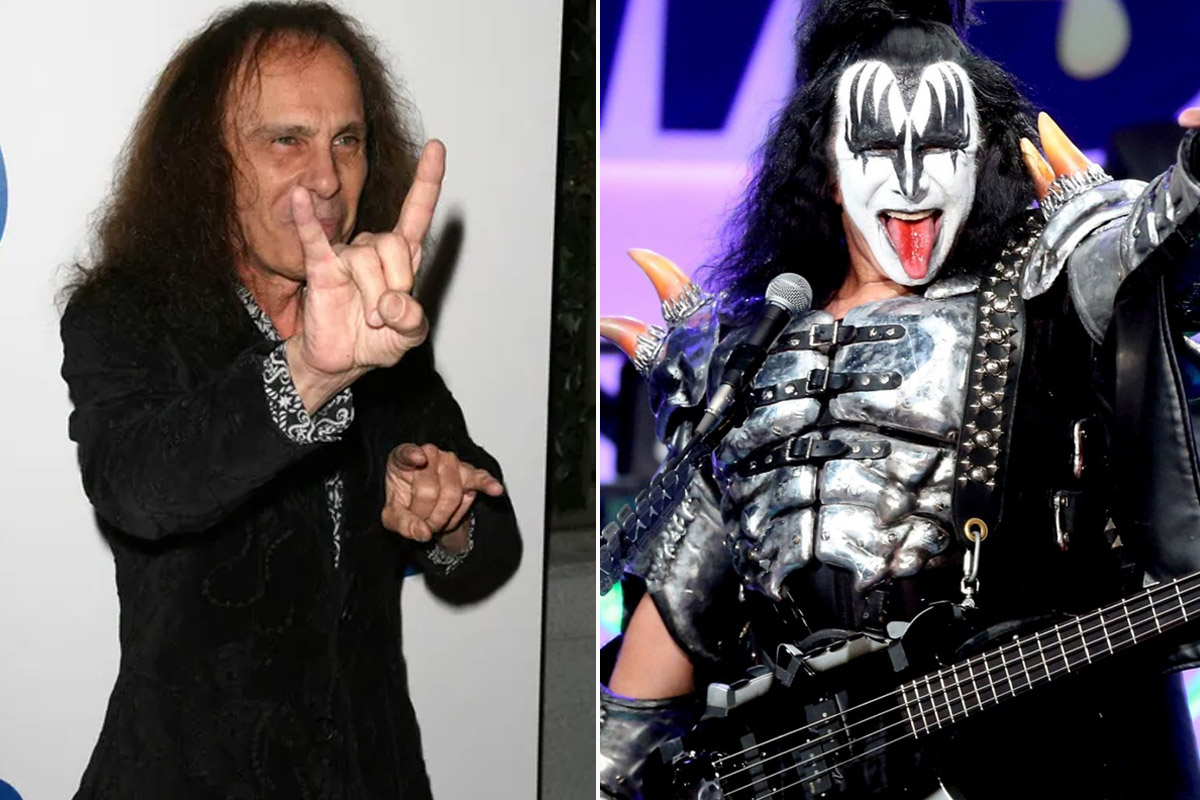 During one of his interviews, Ronnie James Dio opened up about his origin story of using the sign of the horns. He revealed that his Italian grandmother used it to protect the family from the evil eye called ‘Malocchio.’ Therefore, he can’t be the person who invented it. Still, he agreed that he made it famous among metalheads, but Gene Simmons also stated that he popularised it in KISS’s Hotter Than Hell Tour many times before.

Consequently, even though the singer was one of the nicest and kindest people in this industry, Dio probably was enough of the bassist’s words. The late Black Sabbath frontman mocked Simmons, saying that the bassist could claim that he invented it and the other things such as even breathing and shoes that made the metal music unique for the fans and musicians.

Here’s what Dio said about Simmons:

“I’m of Italian extraction, and my grandmother and grandfather on both sides came to America from Italy. They had superstitions, and I would always see my grandmother when I was a little kid, holding my hand and walking down the street. She would see someone and use this hand gesture. I was like, ‘What’s that?’ and eventually learned that it was called ‘Malocchio.’ A person was giving us the evil eyes, she’s giving it protection against the evil eye, or you can give it to them too.

So invent it, no, but perfect it and make it important, yes, because I did it much, especially within Black Sabbath, which had this incredible name already, and put that together with what people think it is. I’m lucky enough to have done it, so it’s been more equated with me than anyone else, although Gene Simmons will tell you that he invented it. Then again, Gene created breathing and shoes, everything that makes metal unique, the culture of metal unique.”

It seems that even this mockery didn’t stop Gene Simmons from insisting on his claims of inventing the sign since the musician even took the matter to court to justify his case.

Gene Simmons Wanted To Own The Rights Of The Devil Horns

Years after Dio’s criticism and sarcastic words about him, Simmons applied to the US Patent and Trademark Office for the gesture’s trademark in 2017. However, he gave up on his trademark attempt shortly after; that’s why everyone wondered whether he regretted this decision after facing a backslash. Simmons then highlighted that he owned commonly used images like the devil horns, so he didn’t regret this attempt.

Regarding his actions of trademarking, Simmons said:

“I regret nothing. Wake up every morning and let your conscience be your guide. Did you know I own the money bag logo? The dollar sign with the bag of money. I own all kinds of things. I own ‘motion pictures’ as a trademark. Anyone who thinks that’s silly, the silliest thing I’ve ever done is wear more makeup and higher heels than your mommy. People said, ‘You can’t do that.’ Actually, b*tch, I can. I can do anything I want to do.”

Furthermore, the later singer’s widow, Wendy Dio, targeted the KISS bassist and stated that it’s a disgusting way of making money from a sign many people worldwide have been using for a very long time. According to Dio, Simmons shouldn’t have tried to own this trademark for the devil horns hand gesture, considering it’s an inseparable part of heavy metal music and culture both for old and young generations.

“To try to make money off of something like this is disgusting. It belongs to everyone; it doesn’t belong to anyone. It’s a public domain; it shouldn’t be trademarked.”

Though the argument over the inventor of the devil horns will continue, it’s not surprising to see Gene Simmons trying to own a sign that has been used for decades. While the KISS icon is undoubtedly an intelligent business person, the unexpected reaction to their dispute belonged to Ronnie James Dio, who mocked Simmons regardless of his calm personality.