Joe Perry’s Explanation For Throwing Steven Tyler Off The Stage

Aerosmith icons Steven Tyler and Joe Perry have a long history of feuds over their music career and private lives. From speaking ill about each other’s solo careers to being jealous of each other, the Toxic Twins have never failed to impress the press with their sharp tongues.

Though they have had countless disputes in the past, the bandmates consider themselves brothers who fight and then make up. In fact, their actions resemble two siblings and can even be seen on stage, where they have also had their fair share of arguments. Today, we’re here to take a look at one of them when Perry wanted to teach Tyler a lesson that led to a minor disaster. 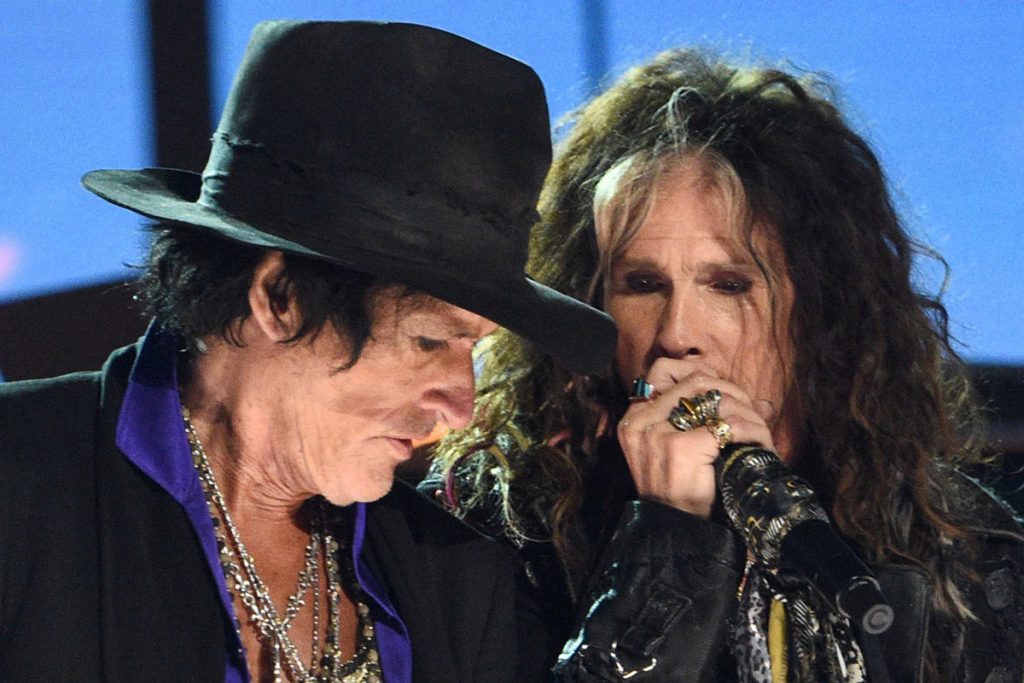 Joe Perry has been asked multiple times whether he ever purposely pushed Steven Tyler off stage after the singer made the headlines numerous times for hurting himself by falling onto the audience. The guitarist stated an incident regarding this issue but started with the story’s beginning.

Perry stated that the nature of being in a band includes physical interactions with other band members. Since Tyler loves sharing a microphone and putting his hand over Perry while performing on stage, it’s inevitable for them to stumble and fall unintentionally. Fearing about getting in an accident, Joe asked Steven not to approach him while on stage.

Since the guitarist focuses on his guitar during live shows, the Aerosmith singer’s innocent onstage antics can quickly turn into on-stage accidents. During an interview, Joe Perry recalled one of the shows during which he was playing on the edge of the stage where he couldn’t see what was in front of him. When the spotlights added to the equation, the guitarist almost fell on the crowd after Tyler came after him regardless of Perry’s warning.

Since he was angry at his bandmate, Perry decided to put Tyler through the same experience. While the vocalist was performing on the other side of the stage, Perry hip-checked him just to scare the singer. However, things didn’t go as planned once Tyler fell onto the audience after losing balance. The guitarist admitted to pushing him too hard accidentally and stressed that they would never hurt each other intentionally.

When asked if he pushed Tyler off stage, Perry said:

“There was an incident. He likes to come up and bump into you on stage sometimes as a part of the show. When you sing into the same microphone, and when he throws his arm around you, or whatever, that’s a part of the show. It’s the physical interaction of the band. But when he comes up from behind you, it can throw you off when you’re trying to play a lead. I’ve asked him politely, ‘Don’t do that because I lose my balance.’ I’m focusing. I don’t have the luxury of being able to put my guitar down and know where I’m at.

He gets into it and sometimes can get carried away. At one particular show, I was at the end of the stage. My toes were basically touching the edge. Right below me, I can’t see anything because it’s back, and spotlights are in my eyes. He comes up from behind and nudges me. I almost fell into the audience. I was pissed because he had done it again after I asked him, ‘Don’t do this shit.’

So, when I was walking back, he was on the side of the stage. As I walked back, I gave him a hip check. I really didn’t plan on him going into the audience. I just wanted him to feel that hit from behind he had just given me. I just hip-checked him a little too hard, and he teetered for a second and then fell into the audience. There was also a bunch of security guides in front of him. I didn’t want to hurt him. We don’t want to hurt each other.”